While wrestling fans are used to seeing Kurt Angle and Katrina Waters (formerly WWE’s Katie Lea Burchill and TNA’s Winter) deliver action-packed matches, if veteran Hollywood producer Len Davies has his way, both of them will also be at the centre of action in a new show called EMERGENCY LA. Davies, who has been involved in television and movie production for the past 20 years, shared his concept of the show, which he’s currently shopping around, in an exclusive interview with SLAM! Wrestling. 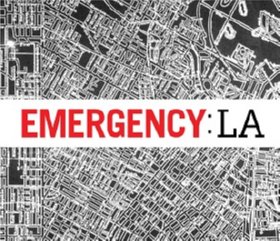 “The show centres on the downtown department of LAPD, the LA City Fire Department, and an emergency contact centre called Trauma One,” Davies described. “Kurt plays Sgt. Gabe Mandel, an old-school cop, ex-military. He’s got a rookie with him, and tied up with him is Motorcycle Officer Dana Lewis, who’s played by Kat (Waters). They, and one other motorcycle officer are the hub of the series.”

To clarify, the show is currently only a concept — though a very-well fleshed out one — at this point. Davies is shopping it around to various networks in hopes to see the series actually make it to air.

“We now have 13 episodes outlined,” he said. “The pilot is not only scripted and ready to go, but the actual shooting schedule — minus the dates, obviously — is there. We’ve got contacts within Netflix, Amazon, and Hulu who have expressed interest; people at NBC and Fox have expressed an interest; various other independent production companies as well. Once we have the right people on board on the investment side of things — and I have no doubt in my mind that this is going to happen — then about eight weeks after we get the green light, we’re ready to roll camera.”

There’s no question in talking with him about EMERGENCY LA that Davies’ passion for the show runs deep. Indeed, he can provide a lot of detail about these yet-unseen characters — their character history, their motivations and dreams, their personality types, and their story arc evolution over the course of a first season. Angle’s character, Sgt. Gabe Mandel, for example, is one that Davies believes that people will look at with respect, given his passion, intensity, and professionalism. Those are, in fact, the traits in Angle himself that made Davies think of him when thinking of lead actors for the series.

In 2006, I started Real Quality Wrestling back in the UK,” Davies said. “We did about a year or so on the wresting channel, Strike TV though things didn’t necessarily work out as well as I’d hoped they would. Then in 2011, I headed to Los Angeles to pursue my acting career. One thing led to another, and I ended up doing some production work for TNA Wrestling. Through that connection, I got to know Kurt. About a week after I came up with the concept for EMERGENCY LA, and given our previous conversations we’d had about acting, I asked if he’d be interested in taking a role in the series, and he said ‘absolutely.'”

As far as Waters, Davies’ introduction took place years ago.

“She was on one of the first wrestling shows that we did, even before it was (called) Real Quality Wrestling — it was a show in 2005. I was entranced. She’s the most phenomenal in-ring talent, and she’s the most beautiful woman. She’s done acting, she’s done Shakespeare. To me, this (show) is the next step for her. In fact, when I developed the character, Kat is the only person I had in mind.”

Notwithstanding his faith in the wrestlers, some people may question whether or not Angle and Waters are risky prospects, in terms of selling their acting chops to prospective networks. To which Davies points out others in whom there was original doubt.

“You may have said the same thing about The Rock,” he pointed out, “or Stone Cold Steve Austin, who’s made some wicked movies. (Knowing Kurt), I know that he’s going to put on a phenomenal performance. He has a lot of depth when you allow him to portray it. I know he’s going to deliver the performance I want from him.”

Davies is confident that a big motivation for Angle will be the respect he personally has for the real-life men and women on the front-line that the cast will be portraying.

“He has such respect for the men and women in uniform,” noted Davies, “that when he puts it on, he’s going to play the role with the same level of respect. I think he’s going to use that to bring the character to life in a way that people around the planet will be able to associate with.”

To Davies, that means a focus on the good people who go out and put their lives on the line every day.”

“I’m very loyal to the 911 people,” he noted. “When I watch shows like The Shield — and I love that show, it was very well done, great acting, great writing. But when I watch The Shield, it annoyed me that they were always concentrating on the corruptness within the police department. To me, that focus on the corruption always sent the wrong picture. I wanted to honour all of the people (on the front lines). The ones who go out there and who do it the right way. That’s why we’re aiming to donate a percentage from the show to the Police and Fire Benevolent Fund — so that we can support the services in L.A. Because, yes, we want to create a show that delivers action and excitement. But we also want it to be even more than that.”

For more information about EMERGENCY LA, and for updates on Davies’ efforts to get the show greenlit, visit SMHollywood.com or the show’s Facebook page, Emergency: LA.