TORONTO – Ring of Honor rolled into Toronto on Saturday night, for the killer co-iPPV with New Japan Pro Wrestling entitled Global Wars. As great as the show was — and exhausting — what I like about the ROH shows is the camaraderie.

It’s almost been, gulp, 30 years since I embarked on this little career writing about professional wrestling.

In that time, I’ve been to so many shows. Lately, I’ve written a few pieces that framed the shows through the eyes of my seven-year-old son, Quinn, as the experience is very different and enlightening for me.

But there was never any question that Quinn was going to Border Wars. 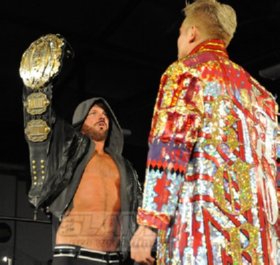 The appeal of seeing IWGP champion A.J. Styles and Kazuchida Okada in the ring is one draw to Ring of Honor, but for the author, equally memorable are the friendships. Photo by Mike Mastrandrea

Ring of Honor shows can often be lengthy, overbooked, illogical, draining tests of endurance. It’s not a place for a kid, though there were a few there at the Ted Reeve Arena last night in the city’s east end. Last night’s show, probably because of the iPPV debut on uStream, was actually pretty tight, with the show proper coming in at a reasonable three hours.

Selfishly, the Ring of Honor shows in and around Toronto offer something that the WWE shows don’t: a real chance to stand around and talk to friends, a few of whom I have known for most of those 30 years (I’m looking at you Eddie Old-School and Kingdom!), going back to my days publishing The Canadian Wrestling Report.

At a WWE show, people are out with their families, and have their assigned seats. Security discourages you from standing around and chatting, often because you are blocking the way for moms or dads shepherding tykes and hauling overpriced tubs of popcorn and watered-down pop. Yeah, I see people I know at WWE shows (and scored front-row seats last time after the intermission because of that), but it’s not exactly quality time.

With the Ring of Honor shows, particularly at the classic old-time Ted Reeve Arena, where Bearman McKigney ran shows 40 years ago, it’s a homecoming.

Wandering the arena, visiting friends and meeting new people is as much of the appeal of the show as anything else. In fact, if I’m being honest, it’s probably more of the reason to go for me than the wrestling action itself.

In this day of social media and interaction through computers, there’s something to be said for shaking someone’s hand that you had only dealt with electronically.

I’d also never met Kyle O’Reilly, one of the young ROH stars, in person. He’s a British Columbia kid and we have a ton of friends from the land of All-Star Wrestling in common, but again, had never met.

To list all the other people would be impossible, and I know there are a number I didn’t get to even see or say hi to. 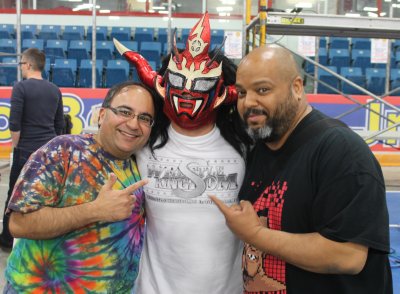 Being in the right place at the right time meant a quick photo for Bob Kapur and Anthony “Kingdom James” Ruttgaizer with Jushin “Thunder” Liger. Photo by Greg Oliver

Hanging out with a few friends, and their friends, who were in from out of town, until 2 a.m. is not something this very un-hip old man does very often either — especially in Toronto’s club district.

We all go to pro wrestling for different reasons. Obviously the athleticism and storytelling is a big appeal for most people, but there are countless over reasons too.

Friendships forged over time are a big draw for me. Definitely more so than the 110th kick to the head in the ring.