The Wikipedia entry for London, Ontario describes the city as “an international centre of higher education, scientific research, and cultural activity.” After this weekend, when Hardcore Roadtrip makes its return to the city, the page may very well be updated to include the words “Canada’s home of extreme wrestling action.”

The event, which includes two wrestling shows, features a huge roster, including: a number of ECW Originals such as Devon, Rhino, Angel of Da Baldies, and 2 Cold Scorpio; some other hardcore wrestling stars, like MASADA, LuFisto, and the Necro Butcher; and various local Canadian independent stars, like Warhed, PD Flex, and Jesse F’n Amato. In addition, the day features a huge Fanfest, where attendees will be able to get autographs and pictures, and participate in an interactive Q&A sessions with the stars. For fans of ECW or hardcore wrestling in general, the day should be a stellar one. But perhaps even more than the fans, the person who may be the most excited about the day is former ECW ring announcer, and Hardcore Roadtrip booker, Steven DeAngelis. 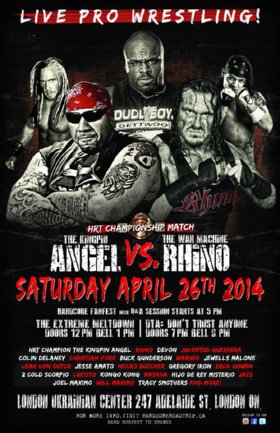 “It’s like a big buffet,” he said, on the phone with SLAM! Wrestling earlier this week. “In addition to what people consider to be hardcore, ultra-violent stuff, you’ve got guys on the top of their game scientifically with their different styles, different influences, martial arts influences, strong style, big man There’s something for every style and every taste. By the end of the evening, the fans when they’re recalling the evening, will be able to fill their plates that they are satisfied with the experience.”

Ideally, that will also translate into fans coming to future shows beyond Saturday’s, including the ones announced for London on May 31, and Toronto on June 1. Part of the strategy, he said, is to bring in a mixture of HRT regulars and also some new people each time.

“Yes, the idea is to have a ‘cyclical’ roster,” he confirmed. “There’s a practical reason for that – namely, because a lot of the top guys are often in demand elsewhere, whether in Japan or England or on other indies, so they can’t necessarily make all of our shows. But the other idea is that we are looking to get fans into someone from Show A, and then Show B, and have them hope for a bout between (those people) on Show C.”

Luckily, in DeAngelis, the company has someone with a relationship with many of the stars, so it makes getting them a bit easier.

“I’m thrilled that, as a result of my long relationships with the guys and gals over all these years, I’m finally able to pick up the phone and talk to people whose work ethic I really appreciate. The people that have been chosen to work for the promotion are people that have that level of work ethic, people that want to be part of something special.”

Of course, for some, ‘special’ translates into ‘extremely violent’. While DeAngelis appreciates and acknowledges that can be the case for some of the matches on the show, the show will be structured so as to have the most violent action taking place after the intermission.

“That way,” he explained, “families can enjoy the shows as well. They can plan the shows around the intermissions. If they want, they can stay for the violent stuff, or they can leave before the blood.”

It’s all designed to leave people with a good taste in their mouth, no matter what their favourite flavour is. After all, DeAngelis said, Hardcore Roadtrip is all about making the fans happy.

“If the fans care about what you do, they will be your best advocates. It’s like how the original ECW grew – it was a grassroots movement by the fans. They’re the ones that got the company on TV and on pay-per-view. That’s what we’re trying to make, the same emotional connection with the fans. I’m very optimistic that we’ll do that this weekend. And I can’t wait.”