Daniels and Kazarian turn the page into comics

Anyone who saw Christopher Daniels and Frankie Kazarian team up as Bad Influence in TNA Wrestling saw how comical they could be. Their funny promos and antics were often the highlights of the company’s weekly TV show. But now, they’ve literally become comic characters — and they couldn’t be happier.

“It’s called Christopher Daniels and Kazarian Wrestle Ah Yeah Comics,” Daniels explained, in an exclusive interview with SLAM! Wrestling. “I wrote it, and it was drawn by Art Baltazar, who’s an award-winning artist.” 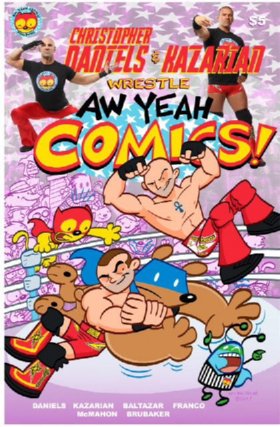 “One of Chris’ huge passions is comic books, and you’ll see that in the book,” added Kazarian. “And I can’t say enough about Art — he’s a tremendous artist.”

Released on April 23, and available at comic book stores, and online at comixology.com and thrillbent.com, the team are confident that the book will appeal to their existing fan base — and are hopeful that it will earn them new fans as well.

“It’s an all-ages comic book,” noted Kazarian, “because one of our goals is to get younger fans to learn more about Bad Influence.”

They are also looking to gain more fans as they take more and more independent bookings outside of TNA (subsequent to this interview, there have been conflicting online reports about their contractual status with the company).

“It’s good to know that the independent scene hasn’t forgotten us,” said Daniels. “We’ve had a chance to work with some great young tag teams, and things have been really fun. There are a lot of things happening on the indy scene,” he continued. “You’ve got companies like Ring of Honor, EVOLVE, Dragon Gate USA, PWG on the west coast. That’s where you see a lot of the fresh, young talent making names for themselves — using the opportunity that spotlight gives them to get known.”

“And also,” noted Kazarian, “it’s been awesome to get the chance to see a lot of old friends that we haven’t seen in a while.”As friendships go, theirs is one of the tightest you’ll find in this business. And while the thought of breaking up the team hasn’t been considered, both are confident that the friendship would sustain if that ever were to happen.

“Right now, the focus of Bad Influence is the team — we’ve barely even scratched the surface of what we can do. But,” Kazarian considered, “I’ve always said if you don’t want to be a world champion in this business, you shouldn’t be in it.”

“I’ve never had the opportunity to become a world champion,” said Daniels. “It’s always been a goal of mine, and I know it’s a goal of Frankie’s. We’re such good friends and understand how much it would mean to each other, that I would never stand in Frankie’s way if he were ever to have that opportunity. And I’m sure that feeling is mutual. We both love wrestling so much, and we’ve put so much into it, that we feel that those chances, if they come, are so well-deserved. That if he were to become world champ tomorrow, I’d be the first man in the ring to strap the belt around his waist.”

“And even as world champion,” Kazarian joked, “I would still be fighting to try to get a word in edge-wise.”