It’s a fair question, but makes Peter Ferriero chuckle. The Million Dollar Man of the 1980s and 1990s was just a character, and therefore Ted DiBiase himself does not have unlimited cash to fund Ferriero’s documentary on his life.

Instead, Ferriero and DiBiase have turned to crowdsourcing for a final push in getting the film finished.

Ferriero discussed why he chose to seek out additional money.

“I really do wish I could have dribbled a basketball to fund the rest of the movie, but it was not a reality,” Ferriero said. “[DiBiase] has been blessed undoubtedly. I have never met someone as grateful as the DiBiases for what they have. But it just wasn’t possible for any of us to fund some of the things we are looking for by themselves.”

The Kickstarter campaign is looking for $30,000 and is in its last days.

“We have invested quite a lot of time and money in the film already. Everything added up, but it was still manageable to a degree,” explained Ferriero. “At some point, we started getting into specific interviews we wanted, and places we wanted to visit. We need archival footage, music licenses, and a lot of things. So those items really got me thinking it was going to be hard for my smaller film company to be able to do it on our own.” 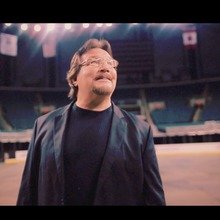 A friend suggested Ferriero try Kickstarter. “So we just went for it. It’s been great, and I really can’t thank everyone enough that has pledged. We keep pushing away. It will be so great to provide everyone with the movie they want to see and we want to make.”

The film will be called The Price Of Fame, which was to look at the challenges of fame and the choices Ted DiBiase made in his life.

But then Ted DiBiase Jr., fresh off his WWE run, joined the project.

“We had filmed quite a bit, but something was just missing. Once Ted DiBiase Jr. got involved it all really started to flow,” said Ferriero. “Because it was a unique experience in seeing Ted’s son follow his Dad’s journey. He brought a lot of great ideas, and we got to film family conversations that up until filming had never happened.”

The focus of the film changed a bit, and the Kickstarter page promises: “Ted DiBiase Jr. goes on a journey to learn his father’s story of faith, and redemption in the world of professional wrestling.”

“There is a lot of raw emotion in this film,” promised Ferriero. “Ted Jr. has not yet spoken to his Father regarding his road lifestyle. There was some really heated and tough moments for both of them regarding this topic.”

Growing up, Ferriero was a wrestling fan. He started a company PF Films in New Jersey that films weddings, and that lead to a desire to do more, particularly documentaries.

“The Million Dollar Man was one of the guys that I rooted for,” recalled Ferriero. “Once I started getting into film, I always wanted to make a movie based on the premise of what had happened to my childhood heroes. I was slightly discouraged based on the movie The Wrestler. I had met a few before and knew not all of them ended up in that manner.

“Ted was always at the top of the of list as to who I wanted to be involved. But I wasn’t really aware of his full story. So, as it would turn out I would be sitting in a church filming him give a testimony. I wasn’t religious at all. In fact at that time I was slightly irritated to have to be at church.

“I guess within a matter of 15 minutes I was deeply invested in hearing the story. I remember leaving that night greatly questioning some of my own choices, and wondering if it was in fact a ‘divine appointment’ that would have me there on that night. So, as I left I said if this testimony had this much impact on me in one evening I could only imagine how compelling it was for anyone that would see it in film form.”

Ferriero estimates that about 70% of the film has been shot, and still hopes for a few major interviews, like Hulk Hogan. “Ted and Hulk have a really great history,” he said.

Roddy Piper and Harley Race were two of the bigger names that have been interviewed. Some WWE stars, like Randy Orton and Sheamus have been supportive of the project and Tweeted out about the Kickstarter campaign.

Ted has a long history and has worked with everyone,” said Ferriero. “Some of these relationships go back 30 years! Everyone has been so open and willing. Ted has left a really great impression on those around him.”

If things go according to plan, there will be more than just the movie. “Also, we are planning a big reunion thing for Ted that fans will absolutely love,” he revealed. “From there we enter into post production. We hope post-production will wrap in August. After that is the fun part.”

A real challenge has been finding old footage, especially of DiBiase’s mother, Helen Hild, who was a pro wrestler, and father, Mike DiBiase, also a wrestler.

“There were a bunch of old 8mm films shot of Ted as a child that we have access to,” said Ferriero. “But Ted Sr.didn’t even think to hire a photographer at his wedding in 1981. So, there are limited photos there as well. Old wrestling footage from the day is sparse as well. In some cases we have filmed some re-enactments of events, and have considered doing some of that as well for those years.”

He is not swayed by the number of wrestling documentaries already out there.

“For those of that grew up on it, I think there is a strong interest in hearing and seeing the real stories,” he said. “WWE did an amazing job at investing us into their stories and characters. We have held on to so much of that. I didn’t grow up wondering if a sports team would win the World Series, I grew up wanting Hogan to beat Andre. I am not alone.

“I have caught quite a few wrestling documentaries in years past. Some of them are fantastic. My goal was to create almost a docudrama. I wanted to create something that was visually appealing to draw people into the moments. I hope we accomplish that in this film.”

It’s a fight to the finish.

“I am really excited about our film. I know just from the wrestling fan’s perspective about Ted’s career, this is a dream movie,” concluded Ferriero. “Above that there’s a real story with heart, substance and honesty. We aren’t looking to create a film that is a sales pitch. But we are looking to make a film that can make you think, make you dream, and make you smile. We are about three days away and still have about $10k to go. Every single pledge helps!”