WESTWEGO, LA – WWE isn’t the only game in town this weekend, as other promotion have invaded the greater New Orleans area to entertain the wrestling fans, and once again Ring of Honor didn’t shy away from the action with back-to-back shows.

Less than 24 hours after bringing down the house with the Supercard of Honor, which saw Adam Cole retain his Ring of Honor World title against Jay Briscoe in a Ladder War, Ring of Honor was back at it with a three-hour-plus TV taping. The Alario Center in Westwego was far from full as maybe 800 people filled the 2,220-seat arena, a far lower number than the previous night. Many fans speculated the turnout was down due to the fact that show was pretty far outside the city and many fans got stranded at the arena for hours after the Supercard. The crowd may have been small, but they made their voices heard. 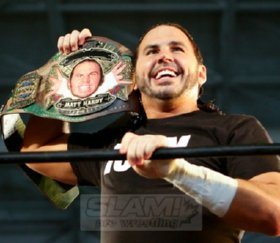 Matt Hardy shows off his new title belt, which he dubbed the Iconic Championship. Photo by Ricky Havlik, RickyHavlik.com

The afternoon taping started with Adam Cole presenting a title belt to Matt Hardy, a gift for all that Hardy had done for him. Hardy immediately christened in the Iconic Championship. That paid off later in the show with a belt sporting Hardy’s visage and giving a thumbs up.

The crowd was also respectful to the camera. When Cedric Alexander slipped off the ropes and chant of “Botch-O-Mania” broke out instead of the ECW standard “You BLEEPED up!” The crowd also kept things lively during breaks in the action chanting for coffee when the beverage was delivered to announcers Kevin Kelly and Steve Corino.

The highlight of the show was the main event of the last taping. Cole, Hardy and Michael Bennett with Maria teamed up to take on Kevin Steen and the Briscoe Brothers. The match was more like a brawl, with even the crowd getting involved, somewhat. An Australian fan, supporting Cole, brought an inflatable kangaroo with him. That kangaroo was slammed to the floor by Jay Briscoe and then took a vicious elbow drop.

When the final bell rang the fans sprinted for the exits to grab what few cabs there were back to downtown New Orleans. One fan was overheard saying, “Wrestlecon isn’t going to wait forever.”

Despite seeing many of the wrestlers the night before and making the trek outside the city, the ROH fans showed up to support the promotion they love and to maybe become part of the show.