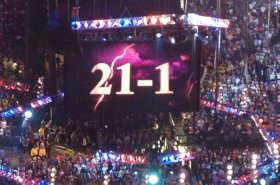 From the pre-show tag team elimination match, the pace was set. A great effort by Cesaro ended in a losing effort. But once the Usos retained their belts, Cesaro finally split from Zeb Colter and Jack Swagger, much to the crowd’s delight.

Seeing Hulk Hogan, Stone Cold Steve Austin and The Rock in the same ring to officially start the show was great. The crowd was into the event and that momentum stayed throughout the opening match between Triple H and Daniel Bryan.

It was a good thing Bryan was able to pull out the duke for the opening match. Before ‘Mania started I spoke to a New Orleans native named John, who has been to the last 10 ‘Manias and he was the only person this week who thought Hunter was going to come away with his hand raised.

The Shield vs. Kane and New Age Outlaws

After such a great match, the question of how could they top this was a legitimate one. Seeing The Shield run roughshod on Kane and the Outlaws shows they still have mileage in their team. For the time being we still should Believe in The Shield.

The Shield vs. Kane and New Age Outlaws

There were some great spots during the Andre the Giant Battle Royale starting off with Kofi Kingston’s amazing save, yet again outdoing himself from previous Battle Royale/Royal Rumble matches. Cesaro was a surprise entrant and of course, him lifting up Big Show brought back memories of Mania III with Hogan doing the same to Andre. I think it’s safe to say that Cesaro now has to be considered a major player in the immediate future of the WWE.

So glad that we had a voodoo entrance for Wyatt, since we’re here in N’Awlins. The beginning of Bray taunting John to beat down a helpless man was great.

You knew going into this match that Bray would be taunting Cena to turn to the darkside and unleash his inner monster. From telling Eric Rowan and Luke Harper to stay out of the match, to giving John a steel chair to finish him off, it was great. The crowd was chanting “We’ve got the whole world in his hand” as they swayed back and forth. Even with a loss, Bray should now be considered one of the top heels in the company. 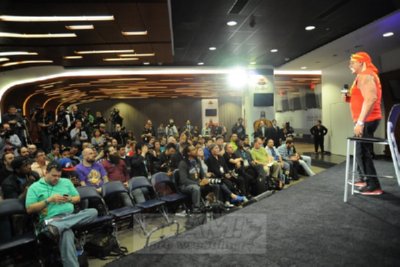 Brock Lesnar vs. The Undertaker

Like everyone else in the WWE Universe, I’m still in shock that Brock Lesnar was able to end The Undertaker’s Streak. At first I thought it was a botch because Brock’s music didn’t play for a while. It seemed like this was a bad dream but once the 21-1 was displayed on the JumboTron, it sunk in. What an amazing set of matches the Phenom has had. Sad to see it go, but all good things must come to an end.

The Divas match was filler. AJ picked up a sneaky win which was cool, but I was still in shock over ‘Taker, as was everyone else at the SuperDome.

The Main Event certainly lived up to its billing. The Batista Bomb and reverse RKO on Bryan was amazing. I’m shocked Orton was able to continue after falling directly on a TV monitor and cutting his back on the move. Hunter and Stephanie running interference was great and it was cool to see Stephanie take a bump on Bryan’s suicide dive.

Of course, Bryan getting the win was such a cathartic moment for the WWE Universe. Lots of the press were chanting along with the Universe as the YES! Movement came to fruition. Congrats to Daniel Bryan on being the new WWE World Heavyweight Champion. Can’t wait for Monday Night Raw tomorrow.