WWE return to Winnipeg a moment of reflection

WINNIPEG — Whenever WWE comes to town, SLAM! Wrestling Producer Greg Oliver knows he’s going to get a call from me asking for a ticket to the show. The event in Winnipeg Friday night was no different.

For the second consecutive show I was in the bleachers, armed with my Nikon DSLR (with the results in this story), but even with my ‘media hat’ on, there’s still a big part of me that goes to these events first as a fan, second as a reporter. 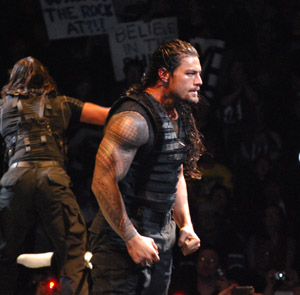 Roman Reigns looks out into the crowd at the MTS Centre in Winnipeg. Photos by Jon Waldman

There’s certainly a tribal element to the show. Those around me were long-time vets, easily as long as I was. I can still recall being a 10 year-old and going to the shows at the Winnipeg Arena, and since the MTS Centre opened I’ve been to three events (pretty sure the only one I’ve missed was the famed ‘musical chairs’ edition of Raw). Most fans around me were the same – a couple fans sitting above me were screaming the whole night (ear is ringing severely now, thank you very much), another couple were moms taking their sons to their first shows (the sons, not the mothers – yes you read that right).

Scattered through the audience were old school tees, including a couple authentic New Generation relics from before the Attitude Era. A few hopeful fans still sported CM Punk shirts (and he received two chants tonight) while signs were reserved primarily for Daniel Bryan, The Shield and Batista (including one referencing him being a toilet… not sure I get that one). 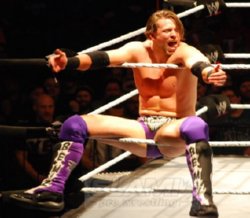 The Miz was in the match of the night.

The matches themselves ranged from okay, to decent, to downright awesome. To me at least, the match of the night, ring work wise, was a surprise — The Miz vs. Dolph Ziggler. It was back in 2011 that I first caught “Ziggles” live in a match against Daniel Bryan, and this one proved to be just as startingly amazing. Ziggler even pulled out a move I’d never seen before — a Hangman’s Neckbreaker with Miz draped across the middle rope and Dolph landing on the outside. Cool.

The evening started with Kofi Kingston defeating Damien Sandow in a crowd-popper. I wasn’t all that impressed with the match, but interestingly Kofi came out of the contest limping, and it didn’t seem like he was selling. He wasn’t the only one — the only championship match of the night — the Usos vs. The Rhodes Brothers — was seemingly cut short when Goldust was hampered by a leg issue as well. The Usos, as expected, won. 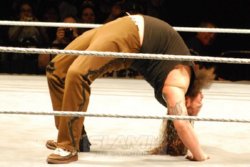 Perhaps the most hotly anticipated match of the night was The Shield vs. The Wyatt Family. The match had all the drama we’ve seen on PPV and TV in recent weeks and really was solid. Winnipeg fans were treated to the famed “Spider Walk” Bray pulls out from time to time, and Seth Rollins… God bless him, hitting a Tope Con Hilo on a house show. Interestingly, The Shield came out on top and didn’t show any sign of dissension. Roman Reigns got the pin for his team (and unfortunately my view of the Superman Punch was obstructed by a drink guy).

All of this took place before intermission. Leading into the break, fans had been encouraged to Tweet their vote for either a dance-off or a tag team match between Los Bellas and Alicia Fox/Aksana. Not surprisingly, the city where Shall We Dance? chose to stick to the grappling, which Nikki took for her team with her new Torture Rack Backbreaker finisher (looks pretty impressive in person, I have to say). 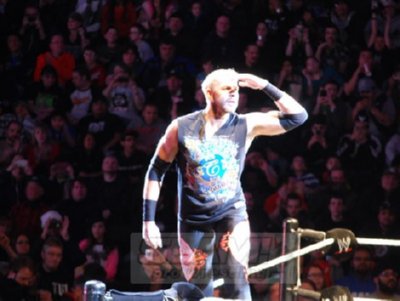 Perhaps surprisingly, perhaps not, the second biggest cheer of the night went to Christian, who was warmly greeted by the province where he survived the infamous Northern Death Tour. Christian upended Alberto Del Rio by the way. 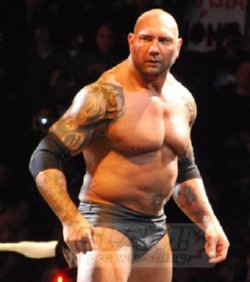 Batista was cheered, believe it or not.

In the biggest shocker of the night, Batista came out for his contest and was at first more heavily cheered than booed. A promo changed all that, and even incited one fan enough to shove The Animal while he was outside during Big Show’s entrance. The fan was rejected, but not before Big Dave casually walked by him and gave him the finger. Batista ended up taking the match by countout, but later ate a WMD punch from Show.

The evening was capped by Daniel Bryan squaring off with Kane inside the steel cage. This was the second straight show where the Cage was featured for the main event — last time it was Punk upending The Miz. Bryan came out to a thunderous “Yes” chant, and if you have ever questioned whether going to see WWE live is worth it, this is what you want to come for — the communal opportunity to chant in unison with WWE’s greatest. Bryan, of course, defeated Kane.

All in all, despite the lack of John Cena, Randy Orton, AJ Lee and other big names (where the heck was Cesaro by the way?), WWE’s Friday fight night was entertaining, and I doubt anyone went home upset; well, except the guy behind me who was begging for Kane to beat Bryan. 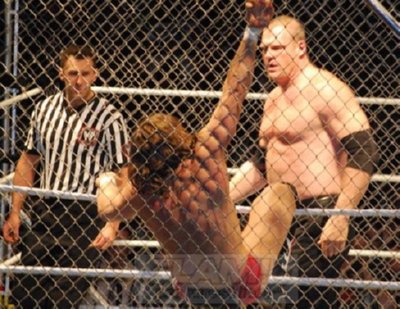