When Damien Sandow told this reporter to “stay tuned” in relation to cashing in his Money in the Bank briefcase on Monday morning, it didn’t feel like a hint that things were going down that night at Raw in Orlando.

But there was Sandow cashing in on Raw against John Cena — and losing.

Needless to say, the interview would have been different on Tuesday morning. 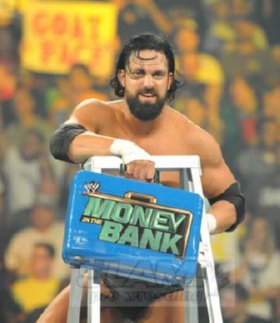 Damien Sandow wins the Money in the Bank match in July 2013. Photo by Mike Mastrandrea

“The Intellectual Savior” of the WWE was at times in character (which has been the norm for his media duties), and at others, surprisingly reflective on a 12-year wrestling career.

Like with his entrances to the ring, things kicked things off with a discussion of his theme music, “Hallelujah Chorus” written by George Frideric Handel for Messiah Part II.

“People in some circles view it as the most beautiful piece of music ever written,” Sandow told SLAM! Wrestling. “When it’s played in a symphony, people stand up. It was a natural fit.”

The two matches were different.

In July 2012, it was Dolph Ziggler who emerged with the contract for a World Heavyweight Championship bout. Also in the match were Christian, Tensai, Sin Cara, Tyson Kidd, Cody Rhodes, and Santino Marella. Sandow was basically elimated from the bout’s ending when Christian drilled him with a ladder, sending both men from the ring.

The following year, the bout (also for a World title match), had Wade Barrett, Cody Rhodes, Antonio Cesaro, Jack Swagger, Fandango and Dean Ambrose. Rhodes appeared on the verge of getting the briefcase, but then his tag team partner and supposed friend Sandow came out of nowhere, shoved him off the ladder and took the contract. Rhodes and Sandow feuded for the next few months.

“The way I approached the 2013 Money in the Bank ladder match for the World Heavyweight championship contract was very, very different, but it was still memorable,” said Sandow.

He said that he purposely avoided watching previous Money in the Bank matches before his own.

“I’m a big fan of studying film, of learning from people who came before you. But in a match like Money in the Bank, it’s such a niche, unique kind of match, I kind of approach those kind of matches, I come up with my own stuff and use my own imagination there as far as stuff I do,” he explained. “I take my role in the WWE very, very seriously. My whole thing is, you had guys like Edge and Christian and the Hardy Boys, and they approach a Money in the Bank-style match one way, whereas I will approach it a different way. Either way, you’re going to get a response out of people.”

The 31-year-old Sandow was born Aaron Steven Haddad in Massachusetts, and was always a wrestling fan.

“Honestly, even subliminally, I have been studying tape my whole life. I used to watch as a child,” he said. “In developmental, yes, of course I studied tape, but even now, when I’m on a plane, when I get home. It’s just a constant process. It’s not like it’s an exact science, so you have to try out as many different scenarios as you can, and you always try to sharpen the skills.”

Sandow trained to be a professional wrestler at Killer Kowalski’s school, and while the legendary wrestler wasn’t taking bumps, he was instrumental in Sandow’s career.

“I had the luxury of being trained by him. A lot of what I learned from him was first-hand,” said Sandow. He’ll hunt down tape with Kowalski in action. “I can go back and review him and Bruno [Sammartino], him and Buddy Rogers. It’s not just for nostalgia purposes — it makes me smile just to see him. He came from a great era where there was a lot of stuff that was done then that isn’t done now. That whole era in general is something that I study.”

Much like his mentor and trainer, Sandow is a master at getting a crowd to react to him.

“It’s funny you say reaction, because it’s essentially the only reason we do what we do,” Sandow said. “If you look at some of the top, top names, if you look at their style, it is a style geared towards getting the most out of people. I just wanted to approach everything I do from the time I got into WWE like that. I know a lot of guys that equate running around and action with a crowd response, but sometimes if you just concentrate on getting an emotional response out of people, you can approach things differently, and that’s what I try to do.”

As Aaron “The Idol” Stevens, Sandow first came onto the WWE’s radar in 2002, when he was signed to a developmental contract and assigned to Ohio Valley Wrestling. He worked on the Smackdown brand in 2006, usually teaming with KC James, and managed by Michelle McCool. James and Sandow feuded with WWE Tag Team Champions Paul London and Brian Kendrick. When McCool was hurt, the team was sent down to OVW, and in early 2008, he was released from his WWE deal, but signed another shortly thereafter, spending three months from November 2008 to February 2009 in OVW.

Sandow credits his time in Puerto, 2009-2010, as the turning point in his understanding of pro wrestling.

“Puerto Rico, it did kind of open up [my mind],” he recalled of his time with the World Wrestling Council. “I remember I was working down there, we had a part in a storyline, and my boss at the time, I got to the back, and he’s like, ‘Great job.’ I said, ‘Thank you. You saw it?’ He looked at me and gave me a smile, ‘No, I didn’t see it. I used to wrestle and I’m partial to wrestling. I heard them. And if I hear them, that’s the only way I know for sure you did your job.’ That was a moment when the lights were turned on, and when I started to approach just everything about this industry completely different. I owe that to my time in Puerto Rico.”

He defended the passionate fans of Puerto Rico. “You can never overreact. If you pay money for a ticket, you’re not paying to be quiet. You’re paying to feel something, whether it’s happy, angry, sad, justified — you know what I mean?”

At WWE’s developmental territory in July 2010, Damien Sandow was born, and he’d debut on WWE TV in April 2012. Oozing arrogance and backing up his bragging, Sandow has been a top-name performer almost ever since.

After a brief discussion of poetry — he prefers English poets to Latin ones — Sandow was asked what the populace needs to do to evolve from “mouth breather” status into something approaching his intellectual equal.

“Number one, just attempt to live out the philosophy that I preach, and not live in defiance of me, which the WWE Universe tends to do,” he said.

Another piece of advice comes from this writer.

Don’t tick him off.

QUESTION: “What was favourite match from Hell in a Cell last night?”
ANSWER: “Mine.”
Q: “On the main show; yours was on the pre-show.”
A: “Are you insulting me?”
Q: “No, I’m not, just curious if there was a match that stood out last night.”
A: “Yes, mine. Next question, please.”

Maybe that annoyance built through the day, resulting in his attack on World champion John Cena on Monday Night Raw, using the MITB briefcase on Cena’s injured surgically repaired elbow. He subsequently cashed in his title shot, and almost beat the superhuman Cena … but didn’t, as Cena hit an Attitude Adjustment for the win. Sandow is only the second Money in the Bank winner (after Cena) to not successfully cash in the contract.

It’s pretty safe to say that we have not heard the last of Sandow, though, even without the Money in the Bank contract in his armoury.