Savage novel is a poignant tale of life, struggle and triumph

Upon first glance of the novel’s title readers might assume that author Nathaniel G. Moore’s Savage 1986-2011 is an autobiography on Randy Savage, but in fact it is something far deeper and more meaningful. Instead, with this novel Moore tells a story about his own life from the first time he sees Randy Savage at a match in person in July 1986, until the passing away of Savage in May 2011. 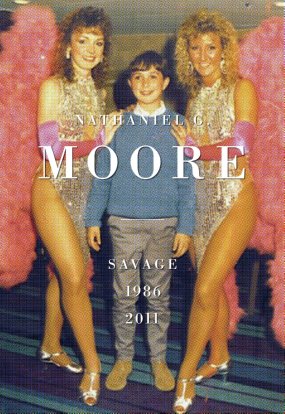 With that as the backdrop, Moore skillfully brings alive what life was like in the late 1980s, 1990s, and 2000s in an effective and engaging way that immerses the reader into his younger self’s world. As protagonist, and the novel’s point-of-view, the figure of Nate is a likeable, but flawed person whose perceptions of people, and the world around him, changes as he deals with internal and external influences that affect his life.

It is perhaps the depiction of those external influences that in many ways are handled so supremely deftly, as Moore brilliantly captures how complex relationships with both families and friends can be; and how often the interpretation of words, actions, and decisions can be misconstrued, which in turn can lead to internal anguish. By fully showing the reader the effects throughout the novel Moore allows the reader to not only develop a greater understanding of himself, and his world, but also how he grew over a 25-year period. The novel does not offer any easy answers when it comes to dealing with personal demons, and instead depicts how it is not only a constant within one’s life, but an everyday re-learning experience.

Furthermore, the figure of Randy Savage is almost used as a touchstone over the 25-year period, to show not only the parallels with the ups and downs of Savage’s career over this time, but also his influence on those who were his fans. It is almost surreal how at times Moore is able to create imagery to transport the reader back to the late 1980s, and 1990s, by cleverly describing objects from that era and their relevance in the everyday society of that time.

While autobiographical in nature there are elements of fiction, but this is not noticeable at all because his fictional self’s father, mother, sister Holly, friend Andrew, and even more minor figures such as his sister Holly’s friend Elizabeth, are given depth within the novel through both dialogue and description that is sometimes absent from many other novels. This level of effort even goes so far as to provide various counter points-of-view to that of the protagonist, and provides the reader with the opportunity to make up their own minds as to whether or not they agree with critical moments and decisions in the novel. What’s more, by taking this approach Moore intelligently accounts for different people’s life experience as they are able to emphasize with at least one figure’s stance throughout the novel.

One of the areas given particular attention in the novel is the sexual awakening and experimentation that the fictional Nate experiences during his high school years, and the uncertainty, and confusion that is a part of that time in one’s life. This is particularly apparent in the friendship with Andrew and the dissolution of that relationship over time. The highs and lows of what it is to experience a long term friendship grow closer, and later disintegrate, are all on full display and will likely find many readers relating to parallel experiences from their own lives.

Moore, as well, manages to accurately capture the changes in the economic climate over the span of the novel, and shows the effects it has on the family over both the short and long term. While not explicitly stated, Moore shows how changes in economic fortunes transform one’s relationships with others over the course of time, and how hard such changes can be to accept.

The style of prose used throughout the novel is also quite fascinating, as at times it is reminiscent of the Latin poet Ovid’s Metamorphoses. Just like Ovid’s writing style, Moore’s novel contains extremely descriptive prose that brings his world and characters to life, while at the same time he uses a style that flows and doesn’t slow down the narrative a wit.

In the end Nathaniel G. Moore’s Savage 1986-2011 is a fascinating artistic tribute to Randy Savage that will not only interest wrestling fans, but also anyone who remembers what it was to live life over that same 25-year period, grow as a person, and become more than they were.

EDITOR’S NOTE: Watch for an interview with author Nathaniel G. Moore in the coming days.