Daniel Bryan: SummerSlam ‘biggest opportunity that I’ve ever had’ 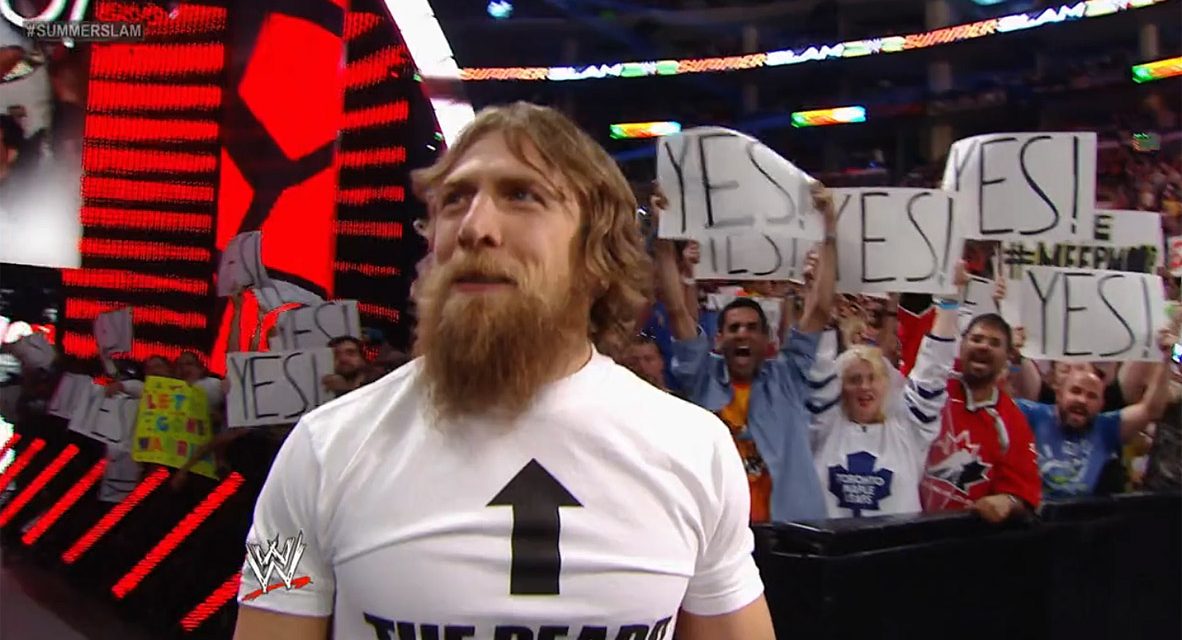 You might have heard by now that Daniel Bryan is challenging John Cena for the WWE Championship at SummerSlam on Sunday. It’s kind of a big deal — especially to Daniel Bryan.

“This really feels like the biggest opportunity that I’ve ever had,” Bryan said last Friday.

That’s saying something, considering that the native of Aberdeen, Washington, has already been World Heavyweight champion, a tag team champion, U.S. champ, and Money in the Bank winner — and that’s just in WWE. Adding in the rest of his accomplishments, from Ring of Honor to Japan, would take a long time.

He vows not to change from the wrestler that people have learned to love, whether as “American Dragon” Bryan Danielson or the bearded Daniel Bryan.

“For me, it’s about staying focused and staying doing what I do,” he said. “I love the wrestling part of it, and just going out there and being able to wrestle in front of all those people, and not change it to be, Ohh, this is the SummerSlam main event, and I have to be this, or I have to be that. No, I’m in the SummerSlam main event because of what I do, and I need to stay with what I do and not try to do stuff that I don’t normally do. But there will be things outside of the box, obviously, at SummerSlam, but not try to change who I am as a wrestler, who I am as a performer just because of the situation.”

The situation is pretty unique in many ways.

He’s the little wrestler who could, who kept getting over with the crowds even when put in situations that would have made the ROH World champion of 2005 cringe — like the therapy sessions with Kane.

The momentum was there for WWE champ John Cena to choose him as an opponent, and that is leaving their history and their current intertwined personal relationships — they are dating twins Brie and Nikki Bella — aside.

During the promo on Monday night from Sacramento, California, the main eventers delivered impassioned speeches about the bout, with Cena defending his record and Bryan touting his.

But during the lead-up, there has been next to no reference to their past.

Cena and Danielson actually faced off before on the Saturday night Velocity show, back in 2003.

Looking back on the match, Bryan sees it as a defining moment, but not of his career.

“The match in 2003 from Velocity is interesting because that was the first night that he started going to the main event,” said Bryan. “He did an interview with Brock Lesnar that night, that’s when he started a feud with Brock for the World Heavyweight Championship. That’s a very interesting part of the story that hasn’t been talked about, really. When we wrestled in 2003, that was his ascension to where he is now. Now, here we are 10 years later.”

Bryan’s elevation to the main roster came after a stint in the WWE developmental territory, beginning in August 2009, and on the first season of NXT, where his mentor was The Miz — a pairing that made wrestling purists cringe. In June 2010, Bryan was a part of the “NXT invasion,” led by Wade Barrett, where the NXT rookies destroyed the WWE set.

However, Bryan erred in his overzealousness and was terminated.

“Actually, one of the reasons that I got fired in 2010 was for spitting in John’s face; it was two things that got me fired — it was choking Justin Roberts with a tie and spitting in Cena’s face right before I kicked him in the head. It was those two things.”

And later that summer, Daniel Bryan was back in the WWE, a surprise guest brought into SummerSlam by … you guessed it, John Cena.

“But then he’s the one that brought me back for SummerSlam of 2010. I think all of those things would have been interesting to bring up,” lamented Bryan.

As well, while the “real” life of the Brie-Bryan and John-Nikki relationships have been playing out on the Total Divas reality show, there has been scant mention of the couplings on Raw or Smackdown.

So far on Total Divas, we’ve seen Cena and Bryan visit each other’s houses, travel on a private jet, and chop wood together. Again, lots of fuel for storylines (perhaps down the road?).

“It’s not so hard, the hardest part of it is that we get so few days off, and then when they’re filming Total Divas, we don’t get any days off,” laughed Bryan. “Because then it’s like, ‘Okay, I just wrestled Friday, Saturday, Sunday, Monday, Tuesday, and I fly home Wednesday, and the cameras are still there.’ For example, my birthday was on a Wednesday this year, and I had just done the Friday through Tuesday loop. I fly home Wednesday, I’m exhausted, and Brie has this really good idea — she hired a personal chef to cook us dinner and that sort of thing. The E! people are like, ‘You did that? Oh, can we film this?’ Then you’re being filmed, and the cook’s not being natural, of course, because she’s like, ‘Oh, man, there’s cameras here.’ We’re not being natural, because then you’re trying to be entertaining.”

For the last number of years, the most personal thing fans knew about Daniel Bryan was that he was a vegan. That’s now in the past, in part because of a soy intolerance and also because of the difficulty finding quality food on the road. “Finding quinoa in Bowling Green, Kentucky, is nearly impossible,” Bryan quipped.

But now we have seen his house and seen him cuddle with a Bella.

Is it hard having your personal life out there?

“No, it’s not too hard for me, mostly because me and Brie have such a great relationship. They almost have to manufacture drama between us,” he chuckled.