It’s a rare treat for fans of pureosu to see Japanese wrestlers in person, especially in North America. For the next month, All Japan rising star Seiya Sanada is working across the Canadian Maritime provinces and shared some of his expectations and highlights of his career. 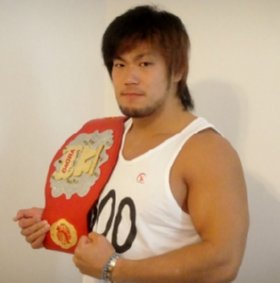 Seiya Sanada with the All Japan Gaora TV title.

Sanada is competing in Grand Prix Wrestling, run by Emile and René Dupre, and will compete in rings in Nova Scotia, New Brunswick and Prince Edward Island — definitely a long way from Budokan Hall in Tokyo.

“This is my first time to North America,” said Sanada through a translator — Rene Dupre’s wife, Kanako. “I’m so excited to be able to work with Canadian wrestlers and learn new styles.”

It is not his first exposure to Canadians, however. Besides his friendship with Rene, who competed extensively in All Japan, there were some Canadians in the All Japan dojo when he trained in 2007.

The training was something, said the 25-year-old grappler.

“It was very hard at first,” said the 5-foot-11, 220-pound Sanada of the efforts required to survive in the dojo. “I thought I was going to quit.”

But six years later, and Sanada’s love of wrestling is as strong as ever.

He started off with a bang, winning the Samurai! TV Triple Arrow Tournament in 2007. However, in the bigger tournaments, like the Champion Carnival, he did not fare as well through the years. On the tag team front, he held the AJPW Unified World belts with Joe Doering, was World’s Strongest Tag Determination League champion with KAI. Sanada is currently the AJPW Gaora TV champion and recently reached the semifinals of the Champion Carnival.

In short, he is a star on the rise. 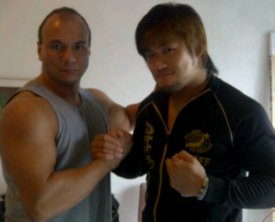 Particular influences on his career include The Great Muta, Kiyoshi and Nishimura, who was a protégé of Karl Gotch. Sanada’s favourite wrestlers growing up were Masahiro Chono, The Great Muta and Ricky Steamboat.

Maritime fans are in for a treat, said René Dupre. “He is extremely flexible and very quick — just watch his work, the guy is amazing!” he raved.

Many of the matches will have Rene Dupre taking on Seiya Sanada.

“I expect our matches to be very stiff, strong-style,” said Sanada, saying Japan versus Canada makes a great story.

“René is so very funny and all wrestlers like him,” said Sanada. “Very good skills. I just watched his latest matches and now he looks even better.”

Sanada said that Dupre has a way of entertaining the Japanese fans even with the language barrier. It’s a skill he hopes to pick up while in Canada.

“I want to learn to talk and connect with the audience,” Sanada said. “Muta said if you don’t go abroad you can’t learn the basics.”