Bob “Hardcore” Holly is a man many feared inside the ring. While today’s wrestling product may be geared more towards entertainment, Holly always brought a no-nonsense style to the arena that echoed the days of tough men like Thesz and Gotch. In his autobiography, The Hardcore Truth: The Bob Holly Story, Holly and co-author Ross Williams dive into psyche of the man who held multiple titles in the WWE. 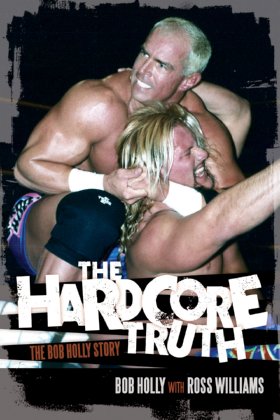 Holly discusses his roots to kick off the book, dishing about his rough upbringing in a poor, yet driven blue-collar family. In doing that, we learn of Holly’s exposure to professional wrestling and how a love of “Playboy” Buddy Rose got him hooked on the business. Holly spares little detail as he details his pre-wrestling life, working into and with the WWE, and the departure that leads to the most recent events of his life.

What is most notable about the text is that it is raw, for better or for worse. While all of the prototypical autobiographical themes remain intact, Holly’s style of writing leads for many branches to grow off of the trunk that is the story of his life. Depending on the reader, this can be a hindrance or a hoot. Not everyone will find this to be their cup of tea, but Holly’s thoughts on various subjects in life and professional wrestling provide a look into the mind of the writer. Topics as light as fitness and well-being for prospective wrestlers grace the pages of the autobiography, but Holly doesn’t shy away from some thoughts on darker subjects, such as the deaths of Chris Benoit and Eddie Guerrero.

For those coming in expecting vivid recollections and deep insight, this may not be the book for you. While heavy on anecdotes, Holly is not unlike his on-screen persona in his prose; he shoots straight from the hip with sharp thoughts that cut to the chase. For those who know of Holly’s personality in and out of the ring, it provides an endearing, personal style that gives an apt representation of the author. While the text may seem a bit rough around the edges, it could not be more apropos for the author.

Holly and Willams’ The Hardcore Truth: The Bob Holly Story will not be up for a Pulitzer Prize any time soon. That said, the man behind the words never seemed to be one for frills. Holly’s text is a straightforward look into the life of a man that has dedicated himself to the sport of professional wrestling. For fans such as myself who appreciated the blunt style of the man known as Hardcore Holly, this ECW Press product will be an entertaining, worthwhile look into one of the unique personalities of professional wrestling.

NOLAN HOWELL can be reached at [email protected] for any questions or comments.