Being able to chronicle his in-ring history to his own satisfaction was a key sticking point to resolving the years of discord between Bret “Hitman” Hart and Vince McMahon. When their differences were set aside and Bret welcomed back into the WWE fold, current fans rejoiced at seeing the iconic Canadian champion return to the modern-day ring and storylines.

Those fans — as well as those who no longer follow the sport because of its evolution to sports entertainment — will have reason to again rejoice at the superior results of the three-disc DVD set Bret “Hitman” Hart: The Dungeon Collection, now in release.

Bret himself selected the 19 bouts spanning his entire career and provides some typically insightful reflections about the matches, opponents and circumstances behind the scenes that saw him rise from his father’s Stampede Wrestling promotion to the heights of worldwide acclaim as “the Excellence of Execution.” (The vast assortment also provides the chance to hear an amazing variety of broadcasters who covered Bret’s bouts.) 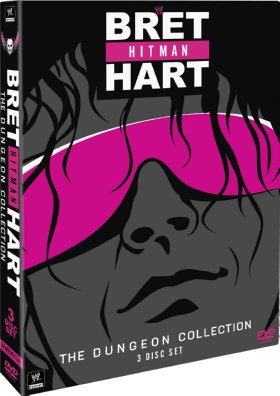 It is sad, to me, that for so many, their opinion of Bret and the quality of his career is coloured by the Montreal screw-job. In watching the discs, the bouts selected show in sequence his stylistic development and mastery of crowd emotions across the globe, and confirm that Bret Hart was as deserving as any wrestler ever has been for a chance to carry the gold for WWF/WWE and WCW.

My attention was especially riveted by the first disc, which was devoted to the old-school bouts and the transition to the McMahon expansion and cartoon-like characters. Bret selected excellent examples of the Stampede heyday with a wild two-out-of-three falls matchup against longtime rival Dynamite Kid, who Hart patterned his cocky persona after; and a sterling North American championship challenge against Leo Burke who had turned against the fans only a week prior, a mistimed kneedrop adding to the drama and crowd heat. Those of us who met and worked with him and recognize his influence on the Canadian scene from Alberta to the Maritimes know the true talents of Leo as a wrestler and booker, and I was glad to see him included in this set.

The next bout was a fascinating moment in time, with Hart venturing to Georgia Championship Wrestling in a “spirited little contest” as Gordon Solie said, against another young babyface: Buzz Sawyer. It was the kind of match you never see anymore, a TV bout designed to get the competition between real athletes as being the foundation of the sport of wrestling. Hart saw “the flash of greatness in him,” and it’s easy to see why Sawyer was so highly touted before his demons took over.

The next bout sees Hart move into the WWF promotion and again meet the Dynamite Kid in a real classic prairie-style bout. To the experienced eye the match held no surprises, but the Capital Centre crowd was rocking with the back and forth action by two technicians who were at their peak in terms of timing and enhanced physiques. It was poetry in motion.

Hart’s initial fame in WWF was in partnership with his brother-in-law Jim Neidhart under manager Jimmy Hart as tag team titlists, and he was proud to showcase a defence just prior to Wrestlemania III against the Islanders.

Now this classic had its own strange twists and turns. As if hearing an AWA refugee, Ken Resnick, on WWF play by play wasn’t weird enough, Resnick bungled the names of the challengers, confusing Haku (King Tonga) and the wrestler who was called Tama at the time (the former Tonga Kid) throughout. The heat for this match was remarkable as fans clearly hated the Hart Foundation passionately, and the way the heels fed into the offensive arsenal of the fan favorites is a video textbook for newcomers to the game who want to understand psychology.

The last two bouts of Disc 1 were of great importance to Hart — a match against Andre the Giant in Milan Italy, that Andre requested. Hart explains the trepidation of facing the huge and moody Giant; and a Maple Leaf Gardens set-to with a recently arrived Curt Hennig. Hart states their first match was not so satisfying and the extra effort they put into this one reflects his wish that he could have had one more match with Mr. Perfect.

Disc Two starts with a tag match-up against the Twin Towers (with their manager, the Doctor of Style, Slick) — the bookish (who knew?) Akeem/One Man Gang and The Big Bossman who Hart raves about as a quality performer. This match features a great lesson in the perils of the sunset flip, written all over Hart’s face in the ring. I think this may be the most entertaining entry of the set, as the Hart Foundation was incredibly over with the Duluth, Minn., crowd during the post match come-uppance of Slick. Speaking of perils, wrestling in Japan “which can be a struggle; they don’t care if they knock your teeth out” is highlighted with a 1990 Tokyo Dome supercard match against Tiger Mask II (Misawa).

One of the few disappointments of the entire set is a 1991 Intercontinental title defence in New Haven, Conn., against Ric Flair, who had just jumped from the WCW/NWA with the title belt in tow. “A hard worker technically, he could do everything (but) he never knew what he was doing next,” Hart said, citing it as a generation change in styles. Despite the presence of Mr. Perfect at ringside and the NWA vs. WWF rivalry, the match was, in truth, heatless.

A Madison Square Garden match against a still-evolving Undertaker was another favorite, as the Dead Man looked forward to showing he could wrestle and not just play the role. “A fun match,” said Hart, and with Gorilla Monsoon and Bobby Heenan describing the action he was bang on. As heatless as the Flair match was, this one had fans screaming from the start. It was also a great example of the recently deceased Paul Bearer inciting a crowd by being utterly bizarre.

Surprisingly, Hart had nothing but good things to say about the controversial Bam Bam Bigelow and their Milan bout from 1993, “The best big man I ever worked with,” he said, capping off Disc 2.

The attitude era of WWE is pre-saged with the kick-off to Disc 3, a 1994 King of The Ring world title defence against a still-green Diesel (Kevin Nash) who “was a nervous wreck … we rose to the occasion and gave them a helluva match.” A classic low-light in wrestling history came in the commentary when NFL old-timer Art Donovan saw Shawn Michaels accompanying Diesel (his bodyguard) down the aisle and asked “is he a wrestlah?” The match itself and in particular the finish, where Neidhart was shooed from ringside and did not return when Diesel and Michaels beat down Hart endlessly, was pretty irritating and diminished Hart more than it elevated the heels.

Other matches on the last disc includes a March 1995 Raw outing with his late brother Owen where the psychology worried Bret, that the fans would side with the baby brother but a smartly called match solved that issue; a sample of the “hotbed of talent” from Montreal that was Pierre Carl Ouellet (buried under the pirate Jean-Pierre Lafitte gimmick, and what a powerhouse he was); and his “last match required under contract” against Stone Cold Steve Austin in Sun City, South Africa, during a period when Hart tried his hand as a Hollywood actor.

The final McMahon-land bout of the retrospective was the Canada vs. USA feud that gave Hart the chance to venture into the “unexplored” territory of being simultaneously a hero and a heel. “The most interesting time for me … I tried hard to be a real good dirty rat” in a feud with The Patriot (Del Wilkes), on an In Your House PPV match from Louisville, Ken., that included interference by a heel Davey Boy Smith and a babyface Vader. I personally enjoyed that era which exploited the fans ultra-nationalism in the USA and Canada, and of the post-1990 bouts selected I thought it was the best showcase of Hart’s versatility and skill, and possibly the best match Del Wilkes ever had as well.

After touching on the circumstances of his departure from WWF, tragic death of Owen, and accidental miscue against Dean Malenko that resulted in a very painful and persistent groin injury that hobbled the Hitman, two WCW matches are included: a January 1999 Nitro match defending the U.S. title with Booker T as a cheater, and a November WCW title tournament match against Sting as a hometown favorite at the Mayhem PPV in Toronto.

Hart was supremely complimentary about Booker and his natural athletic ability, and criticized the WCW booking plan — there was none — to let Hart elevate Booker to superstar heights as he wanted to.

Hart’s take on Sting — that he had misjudged Sting personally because he broke into the business with the Ultimate Warrior who Hart did not care for — proceeds to a very honest explanation that there may have been deserved hard feelings about Hart’s adoption of the Sharpshooter leg lock after Sting had popularized the Scorpion Death Lock. Until I heard Bret’s explanation, I never really noticed that the holds were, in fact, applied differently, and if you watch the match closely and ignore the idiotic run-in by Lex Luger setting up a re-start so Hart could win a second time, Hart was correct! Clearly Sting and Hart had a lot of respect for each other than even the bad booking couldn’t conceal.

Given the career-ending concussion he suffered in a match with Bill Goldberg that is briefly shown and discussed, it is no surprise that Hart makes a point of of attributing an important quality to many of the opponents on the bouts he chose for this collection — that they were “safe.” This compilation is as much about the art form he grew up in and grew to be the standard-bearer for — and not hurting the guys across the ring from you was part and parcel of that tradition.

You don’t have to be a Bret Hart fan or believe his mantra “The best there is, the best there was, and the best there ever will be” to appreciate his enormous ability and genuine love for the sport and for the fans across the world who loved and hated him with equal enthusiasm. The Dungeon Collection is a fine credit to his legacy and I would recommend it to any fan of the sport — or in an offbeat way, Canadiana — as both entertaining and informative. Hopefully a subsequent compilation is in the works because there are many more great Stampede and WWF era matches — and the full double knockout angle with Goldberg from Toronto — that Bret Hart can proudly share with his fans.

Dr. Marty Goldstein was surprised on his radio show one afternoon when regular guest Dan Kroffat said, “I have someone here I want you to say hello to” and handed the phone to Bret Hart.