New comic mixes crime and rasslin’ in the 1970s

With a new comic book, Swerve, two writers / wrestling fans prove that the descent from the twisted ring of professional wrestling into the ugly world of drugs and crime is not that long a journey. 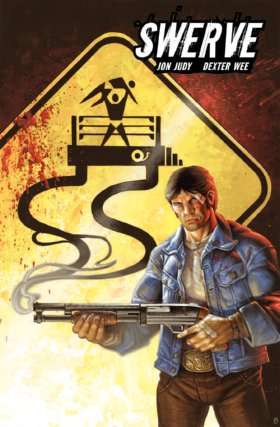 And while we, as fans, like to joke about how evil some promoters have been through the years, it is safe to say that none were quite as evil as the villain here.

Here’s the set up for Swerve, which lays it out pretty well:

San Antonio, 1976: Eric Layton, desperate for cash, left college behind to dive into the world of pro-wrestling. From there, it was an easy slide into the underbelly of the “rasslin'” biz, where the box office and concession stand make for an easy way to launder drug money. Eric wanted out, but he had seen and done too much. They would never let him walk away, so he went into business for himself, hoping to make enough quick cash to sneak away and buy a new identity. When Eric is pinched by the police and forced to flip on his boys, he is stuck between the cops and the crooks — and the idea that he will escape with his life is looking less realistic than a pro-wrestling match.

For a comic book fan, it’s a compelling read, but far more violent than anything you’d find in a mainstream publication, so be prepared for that and keep the kids away.

For a wrestling fan, there are all kinds of little tidbits that will make your day. I marked out when one conversation was “translated from carny,” the Ric Flair-like World champion is a seriously messed up dude, and the women’s wrestling promoter is a horrible mix of the Fabulous Moolah, Billy Wolfe and Scarface.

But in the end, it’s the dual life of wrestling and crime that hooks you.”Joe, this … this life of ours, it ever seem weird to you?” the protagonist asks his best friend and wrestling/crime mentor. Naturally Joe thinks Eric is talking about wrestling, not the drugs, beatings and killings.

So how did this all come about?

“The idea of combining territorial wrestling and crime came from reading Jim Wilson’s Chokehold,” said Judy. “I know much of what he wrote about was unsubstantiated, but it all certainly made sense, and it got me thinking: If wrestlers and promoters might fake workplace injury to pay for a surgery, or beat outlaw promoters and wrestlers to kill their competition, well… what else might they do? Add to that the cash that was rife in the territories, and the organized crime that we know was in the background what with the unions involved in television shows and arenas and concessions suppliers and, well, it just got my imagination going.”

Judy pored through books by the likes of Ric Flair and Jerry Lawler, and found the Fabulous Moolah’s autobiography particularly inspirational, as well as online stories about her. “The monopoly she and her husband had on ladies wrestling got me thinking: How would an absolute criminal scumbag run an operation like that?” Judy explained. “Other than that I just kind of knew what I knew from watching lots of wrestling and then trying to capture the feel of what I’d seen, but combining it with a ‘What if…’ What if selling out the local arena every week weren’t enough? What if rather than shady, a promoter were completely irredeemable?”

By aiming for realism, it seems completely believable that this particular wrestling promoter (and promotion) could have gone off the rails. Judy has done his homework, and can throw out some of the shadier deals of the day. 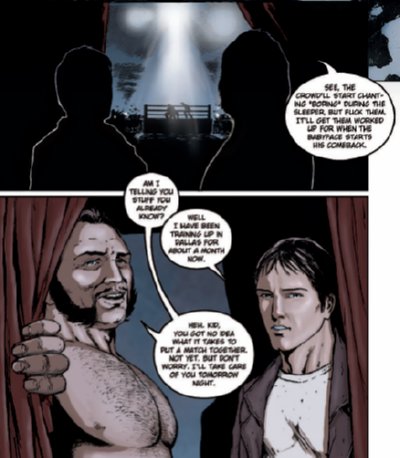 Joe, left, instructs Eric Layton on some of the basics of pro wrestling.

“I’m sure promoters MIGHT have had a hand in even shadier business than busting up competition and running a monopolistic trust and skimming from their workers, but I don’t THINK they did,” he said. “It was just important to me that it COULD have happened, that it would read like a possible, even plausible story.”

The tale of Judy and Wee getting Swerve together is equally interesting.

Both were life-long comic fans. Wee started drawing as a kid, but only graduated to full comic books about five years ago. This is Wee’s first complete graphic novel.

Wee applied to an online posting looking for an artist to draw The Reserves in 2007. “We did one issue with co-writer Sean McArdle after that Jon offered me Swerve,” recalled Wee.

They came at wrestling from different points.

“I grew up with WWF and Hulk Hogan and Ultimate Warrior and Bret Hart and that’s mostly my idea of wrestling,” said Wee, who illustrates the web comic CURA TE IPSUM. “Working with Jon on this project gave me some knowledge on wrestling history and what goes on behind the scenes.”

Judy was first exposed to WWF in the Hulkamania era, and hated it. “I thought that’s what wrestling was, and had no interest,” he said. “As a teenager, I discovered Bret Hart while flipping through the channels, and I was pretty much instantly hooked. I remain an unapologetic Hitman mark. I started writing comic books about five years ago, strictly as a hobby — a creative outlet for unwinding. Once I started writing them, I guess it was inevitable that I’d eventually combine those interests, and thus Swerve.”

Because the graphic novel is set in the 1970s, there are some historical anomalies that a hardcore wrestling fan might notice, like the heels and babyfaces in same dressing room, talking about the matches, which rarely happened during that era, or the fast-tracking of the ex-football player into the ring (though, man, he pays his dues).

“We tried to be historically accurate enough not to ruin the illusion, but we weren’t making a documentary, so I didn’t get too worried about it,” said Judy. “For example, in one scene a character references a powerbomb. I wasn’t sure how old the move was – the first I could think of having seen it was from Vader and Kevin Nash in the early nineties. I figured it was older than that, but I wasn’t sure how old. I decided it didn’t matter to me – it conveyed what I wanted to, so I went with it. But I didn’t want people to be taken out of the story, because the fashions weren’t right, or the cars were anachronistic, or what have you.”Both hope that there can be a sequel to Swerve.

WHERE TO FIND IT: It’s available in digital downloads from the service comixology.com, and it will be in comic book shops and on Amazon and BarnesandNoble.com next month. Best bet: Call your local comic book shop and ask them to order it.