Comedy goes off the top rope in B.C. in wrestling vs improv main event

Professional wrestling has always consisted of a combination of athleticism and entertainment, however on February 5th, Elite Canadian Championship Wrestling will be taking it to a new level at the Pop-Up Comedy SLAM event when they take on The Fictionals Comedy Company in an Eight-Man Tag Team Comedy Improv Match.

For ECCW referee Bill Taylor and regular member of the improviser troupe The Bobbers, the genesis for the Pop-Up Comedy SLAM came from his friendship with Daniel Chai who heads The Fictionals Comedy Company. “Daniel is a bit of a wrestling fan himself and I think we both came up with the idea of doing a split brand show with ECCW wrestlers and improvisers,” Taylor told SLAM! Wrestling. “Scotty Mac and Ravenous Randy Myers were totally on board from the get go, and it’s quite exciting!” 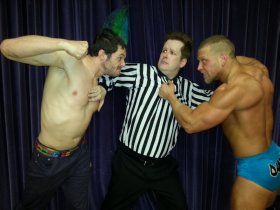 Comedian Daniel Chai recalled that the idea for the Pop-Up Comedy SLAM goes back many years. “We have always talked about one day doing a wrestling-themed show, and since I have a venue at Café Deux Soleils and improviser connections with The Fictionals Comedy Co. and he has connections to the wrestling community with ECCW, we figured it was high time to get something going,” said Chai. “Since I’ve always had secret dreams of being a pro wrestler, the Pop-Up Comedy SLAM seems like the next best thing. The Fictionals have been performing regular shows each week for over two years, and this is the first show of its kind in our history; maybe the first ever wrestling-comedy show in Vancouver, or maybe ever!”

The marrying of wrestling and improv comedy into such an event is something that Taylor felt made sense. “During my wrestling training, I quickly found out that improv and wrestling go hand in hand; you have to be quick on your feet, both physically and verbally,” said Taylor. “I’ve always wanted to have an improv class for wrestlers, but unfortunately that never materialized. I have had wrestlers come to my improv shows, but only as guests, and not as actors.”

Chai echoed Taylor’s sentiments that wrestlers like Scotty Mac and Randy Myers are great fits for improv comedy because many of the skills needed to be a wrestler are the same. “We have to be able to work well with our tag/scene partners; and pro wrestlers like those in ECCW know how to put on a great show and entertain a crowd, which is something we comedians also enjoy doing,” Chai told SLAM! Wrestling. “Bill Taylor is a long time improviser with lots of experience, so I think he’ll be able to hold himself well in the Pop-Up Comedy SLAM ring. As for Randy Myers and Scotty Mac, I expect them to bring some exciting energy and new moves to the stage, and hopefully The Fictionals can show them a thing or two as well.”

To ECCW owner and wrestler Scotty Mac the Pop-Up Comedy SLAM between Randy Myers and himself will be a new experience despite plenty of acting experience. “I’m quite confident in my sense of humour. I won’t be doing stand-up at any point, but I do enjoy making people laugh,” relayed Mac to SLAM! Wrestling. “My wrestling career hasn’t necessarily prepared me for comedy, but it has forced me to get really good at improv. You must be mentally quick to respond to changes in the middle of a live performance. You’re likely to look foolish if you’re not quick-witted in response to another wrestler, or a fan that yells something at the ring.”

However, not all the ECCW participants are as unfamiliar with improv comedy. Bill Taylor’s connection to improv comedy goes back to his arrival in Vancouver when he saw on an ad for the Vancouver Theatresports League. “I was instantly hooked. I then started going to classes, and then I was performing for their rookie league,” reminisced Taylor. “I didn’t do improv comedy for a few years until a friend of mine who was in Theatresports wanted to create a gay and lesbian improviser troupe called The Bobbers. I joined that group and we’ve been doing shows continually for the past five years or so.”

While his troupe, The Bobbers, have been on sabbatical Taylor produced a show called Keep Calm and Improv On! at which ECCW wrestler Sid Sylum was one of the special guests. “The wrestlers seem to love being challenged doing something else with their improv skills, however marginal they are,” said Taylor. 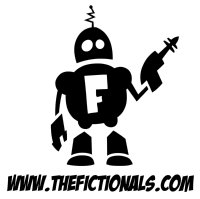 As for the Pop-Up Comedy SLAM itself Chai says it will feature a four-on-four tag team action, with teams captained by Scotty Mac and Randy Myers facing off in a wrestling inspired comedy action. Improvisers from Second Storey Theatre, Instant Theatre, Vancouver ThreatreSports League and The Fictionals will all be featured. “I hear there’s some bad blood between the two gentlemen, so they’ll get to work out some of that aggression with some punchlines instead of punches,” stated Chai. “The winner of the Pop-Up Comedy SLAM will be crowned Comedy SLAM Champ and will proudly get to wear that title back to the ECCW ring. The audience should expect lots of action, lots of respect and homage to wrestling’s storied history, and lots of laughs!”

The Pop-Up Comedy SLAM will be held on February 5th 2013 from 7:30 p.m. to 9:30 p.m. at Café Deux Soleils located at 2096 Commercial Drive in Vancouver, BC. The event will feature the talents of Scotty Mac, Ravenous Randy Myers, Bill Taylor, Jenn Perrin, Graham Myers, VJ Delos-Reyes, Kyle Fines, Amber Cella, and Daniel Chai as the referee. Tickets will be $5 at the door.