Though the life of Don Arnold has come to an end, it’s fair to say that he had multiple lives during his 90 years on the planet. Wrestler. Teacher. Coach. Ph.D. Hypnotherapist. Author. Nudist. Survivor. All apply to “Hercules” Arnold.

Born September 29, 1922 in a San Diego home, he enjoyed his upbringing. The local grammar school was about a five-minute walk; “It was really fun growing up in San Diego. It was a village then,” Arnold said. 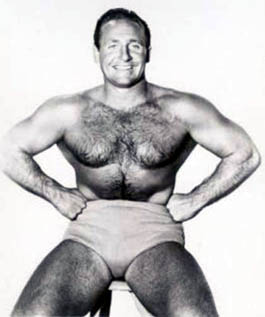 He grew into a beast of a man, 200 pounds by the time he was 16, and ending up 5’11”, 240 pounds. Sports came easy at San Diego High School, including wrestling, football, basketball, and weightlifting. At San Diego State University (San Diego College at the time), he was a four-year letter man in wrestling, and was state champion for three years. One year in the NCAA nationals, he was bested by future pro Bob Geigel for third place.

A 1955 San Francisco program states that “Arnold graduated from San Diego State on a Friday and made his wrestling debut on the following Monday.” That was 1950, and, in conversation in 2006, Arnold didn’t remember who actually made the pitch to turn pro — he’d met so many of the wrestlers already, especially through his weightlifting. After all, Arnold had set a world record in 1949 with a 420-pound bench press.

The beach culture was conducive to his lifestyle, and he loved to surf as well as workout. Throughout his wrestling career, he was based out of Santa Monica, California. “That’s where a lot of the muscle boys were, so that’s what I was doing,” he said. “When I worked around L.A., it was really a tremendous training ground because all the babyfaces were in tremendous shape. We worked out on the beach all day, swim, whatever, and stayed in good shape.”

“Hercules of the West” was one nickname, and “Powerhouse” Arnold was another.

“Don is the friendliest fellow you will ever meet,” wrote Eleanor Brown in a 1953 NWA Wrestling magazine. “Always ready with a big smile for one and all, he has fans from 6 to 96, and he treasures them all and counts them as friends. Don appeals to the ladies (well naturally!) but he is also a favorite with the stronger sex and is often referred to as ‘a wrestler’s wrestler’ and ‘A man’s wrestler.'”

Success came quickly for Arnold, and by 1952, just a couple of years into his career, he was a claimant to the American Wrestling Association World title based out of Ohio.

A 1955 scouting report in Wrestling U.S.A. described his style as a babyface: “Arnold is a deceptive man. His unorthodox method of slowly stalking an opponent usually causes men to become careless — as many wrestlers will testify who have been caught off-guard by the Californian’s blinding speed.”

Besides working across North America, Arnold made trips to Hawaii and New Zealand, where he spent most of 1951. “As an American, down there you’re a novelty. They could build you up, or tear you down,” he said. One of his frequent opponents there was the future Fabulous Kangaroo Al Costello; “He was well known. I lost track of how many times I beat him. It really helped out.”

But eventually the grind of the road got him down.

“That was just something to do, and it was fun. The money was good at the time. It kind of spoils you. Oh God, you had to be in shape. The only bad part of it is, for those to really be on top, you had to travel, travel, travel.”

And so Arnold fell back on his schooling, and became a full-time teacher, wrestling part-time on weekends and during the summer vacation. He taught high school for 20 years, and the last while was interesting, as he was wrestling in California under a mask as Dr. Death. His students would come in raving about what atrocity the villain had done this week to their heroes.

“They would come in and tell me about that son-of-a-gun Dr. Death. I’d say, ‘I don’t watch that stuff,'” laughed Arnold. While it was reasonably well-known within the school system that he moonlighted under his real name, Dr. Death was a mystery. “Hell, if they had known that when I was there, I think the principal would have fired me.”

He was also a wrestling coach at the high schools, including Yuma High in Arizona. 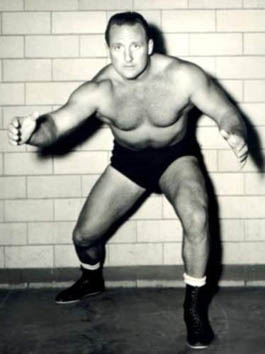 After teaching, Arnold wrote a book on stress management, and became a hypnotherapist. “It’s not magic. It’s the way the old head works,” he said, adding that the basis of hypnosis is recognizing personality types. He added to his 1959 master’s degree from the University of Arizona with a Ph.D in human behavior from La Jolla University 25 years later. (His Ph.D thesis was called “Stress Reduction Through Cognitive Behavior.”)

Another book was a little closer to his heart — Basic Nudism — which explored his 30-year relationship with the clothing-optional lifestyle, social taboos, and the psychology of nudism.

Arnold was married four times, with a son and a daughter. For the last number of years, Arnold was in poor health and lived in Hawaii, where he passed on November 22, 2012 of natural causes.

In 2006, Arnold was thoughtful about his adventures. “I wish I could still do it,” he lamented.