ROH rocks the house in Detroit

DEARBORN, Mich. — Ring of Honor returned to the Detroit area for the first time since May 2011 on Friday, bringing with a night of action-packed, crowd-pleasing wrestling.

The evening, featuring two championship bouts, saw most of the wrestlers heavily engaging a packed house at the Ford Community & Performing Arts Center. 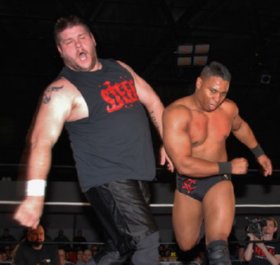 The match was a back-and-forth affair, with the crowd especially getting behind Mark Briscoe’s chicken clucking. The Briscoes controlled Edwards for much of the opening part of the match, taking him to school, so to speak. The Wolves would knock the Briscoes to the floor and come through the ropes and crush them into the barricade with a double suicide dive.

Both teams received standing ovations on their way to the back.

In the other title bout of the evening, which took place right before intermission, Kevin Steen successfully defended his ROH World Championship beating Detroit’s TaDarius Thomas with the Package Piledriver.

Steen started by throwing the smaller challenger around ringside and into the barricades. Back in the ring, Steen provided nearly endless commentary. Thomas got some hope when he had Steen sitting on the top rope. He went for a superplex, but Steen bit him and sent him to the mat. Steen rose and attempted a Swanton Bomb, but Thomas got his knees up.

But, despite the support of his hometown crowd, Thomas wouldn’t have enough, despite an impressive double hook German suplex, as he succumbed to the F5 and the Package Piledriver.

In the co-main event of the evening, former House of Truth members Rhino and Michael Elgin collided in what was a very good big man match.

The two almost immediately hit the floor and brawled through the crowd, taking a lap around the facility, including brawling right through this reporter’s row and stopping right in front to exchange some punches.

When they returned to the ring, the action picked up with various power spots, with neither man being able to drop the other.

Eventually, Rhino drilled Elgin with the Gore, but Elgin somehow kicked out at the last second, leaving Rhino in disbelief. Rhino would set up for another Gore, but Elgin landed a big kick and locked in the Crossface right in the center of the ring, leaving hometown favorite Rhino no choice but to tap.

After a slow start, the two were able to get the crowd into the match at the end. Jacobs hit Cole with a blockbuster on the apron and both men were barely able to beat the 20 count back into the ring. Back in the ring, they slugged it out and Cole hit a superkick that sent Jacobs flying into the rope. Jacobs, in a desperation move, lunged at Cole only to be caught with another superkick coming in for a fantastic finish.

In the first bout after intermission, Charlie Haas, angry as ever, beat two local wrestlers with a double Haas of Pain.

Roderick Strong was impressive in a win over Silas Young. The end came when Strong hit a gutbuster and a big boot to finish it.

Jay Lethal beat Steve Corino with a springboard back cutter followed by a flying elbow. Corino, solidly the fan favorite, was given a nice ovation for his efforts.

And in the opening match of the evening, Kyle O’Reilly and Bobby Fish beat the team of B.J. Whitmer and Rhett Titus in a great, high-spirited opening match when O’Reilly delivered a kick into a Fish brainbuster to end it.

All in all, it was an excellent night of action that fans went home happy with. All the wrestlers worked hard and all the interaction with the fans will keep them coming back for more.