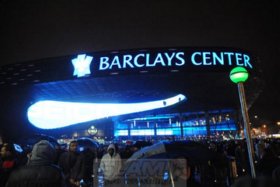 As I was driving the streets of Brooklyn to the Barclays Center I was almost certain that I was lost and definitely not on my way to Brooklyn’s newest sports arena. In fact, I was so convinced I was going the wrong way that if it wasn’t for my GPS, I would’ve made many U-turns and missed the first part of the show.

If most of the arenas I visited are build on a big empty land, Barclays Center is surrounded by stores and restaurants and is located where you’d expect a shopping mall, a huge retail store like Macy’s, but never a sports arena.

That being said (and after $40 for parking), the outside of the venue is really nice and neat, with all kinds of colored lightning when you get in by the main entrance.

The Brooklyn Nets, recently of New Jersey, became the first tenants at the start of the NBA season.

No doubt the WWE crowd brought something different than the usual basketball set.

When I got there, the pay per view was just starting, along with all the fireworks go with it. But if it was loud for the 15,000 plus in attendance, as fireworks always are, it was insane at the ticket booths located at the main entrance. Actually, the fireworks sounded like some giant machine gun. And I’m not even exaggerating. Some people bent down after hearing it. I quickly realized two things: that the main entrance is located right behind the Titantron and the wrestlers’ entrance, and that the place can really echo!

It was a brutal and somehow funny introduction to this venue. 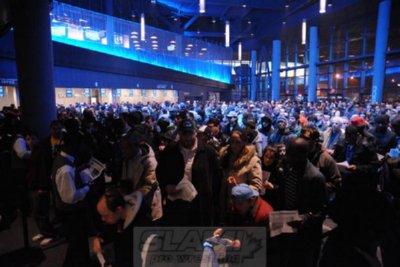 The crowds mill in the front lobby before the start of TLC.

Inside, the building looked great, pretty much like any new arenas or stadiums built in the recent years.

Besides the Nets and some music concerts (including New York’s own Jay-Z), WWE TLC is the biggest event showcased so far at the Barclays Center since its opening in September.

For those not too familiar with New York City’s geography and demographics, Brooklyn is the most populous borough of the five included in NYC. Its population of 2.5 million would be the fourth largest in the United States if Brooklyn was an independent city.

Brooklyn and wrestling have also a few ties–Homicide, Low-Ki, Cryme Tyme as well as WWE Hall of Famer Mike Tyson are all from the borough.

As far as the show went, there’s no need to recap it since it’s been done a million times since Sunday, but I’d like to add some personal notes. 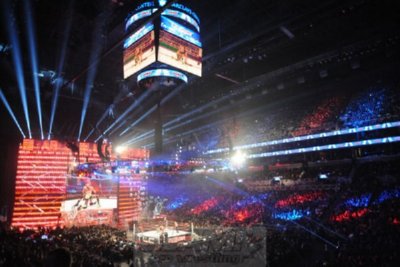 A good shot of the ring and the Titantron in the background.

Like pretty much everybody else, I thought The Shield versus Kane & Daniel Bryan & The Ryback was awesome, as well as the main event between John Cena and Dolph Ziggler. I even liked A.J. Lee’s turn. I was expecting Zack Ryder in the six-man tag, but if there was a time to bring back the Brooklyn Brawler, that was it.

More special to it is that I had the privilege to watch the show live with some Ring of Honor’s wrestlers who happened to know very well Seth Rollins (Tyler Black in ROH). It was a special moment to see them becoming emotional after the match since The Shield (Rollins included) looked great in their first PPV match.

Historically, Brooklyn used to be a huge sports city mostly because of the Dodgers, Jackie Robinson and Ebbets Field before the team moved to the West Coast in 1957. Now, with the Nets in, NHL’s Islanders moving in 2015, and with the WWE, Brooklyn is slowly taking back its place as a major sports area in the U.S.