The founding members of the New World Order are often credited with creating one of the revolutionary stables in the history of professional wrestling. While it is true they gave the stable all of its influential personality, the real credit for its success goes to former WCW Executive Eric Bischoff.

As Bischoff himself admitted, the creation of the New World Order was sparked by a wrestling angle he scouted in Japan in which stars of New Japan Wrestling and the Universal Wrestling Federation “invaded” each other’s territory. Expanding upon the premise, Bischoff lit the fuse on WCW’s version of the storyline with the incursion of the Outsiders and heel turn of their third member: Hulk Hogan. 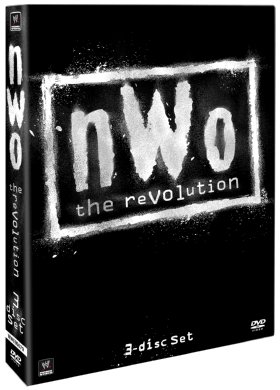 The New World Order turned out to be one of the greatest and profitable wrestling angle or feud ever created.

None of this, though, is explained or detailed in the New World Order: The Revolution set, which is a shame because the pre-history is just as important as the astounding phenomena that followed. The New World Order would transcend the wrestling world and become its own highly lucrative and popular mainstream brand rivalling the marketing power of The Rock and Stone Cold Steve Austin or even Hulk Hogan himself. It was responsible for World Championship Wrestling returning to the popularity it had in the late ’80s, early ’90s when the World Wrestling Federation was caught up pushing a garbage man, an aerobic instructor, a clown and a dentist.

New World Order: The Revolution traces the history of the stable from the Outsiders invasion, to the Black&White/Wolf Pac split, to the reformation with Jeff Jarrett and Bret Hart, to the poorly executed arrival in the WWE — which I still say was one of the biggest missed opportunities ever in the wrestling business.

All of the classic, spotlight moments are there: the Hogan heel turn, Nash powerbombing Bischoff through the stage, the feuds with Sting, Goldberg and Roddy Piper. Some of the material though deserved more detail and more play. The one-hour running time for the documentary portion of the set is just not enough to cover the entire New World Order story and do justice to the good and bad of the brand.

The most unfortunate part of The Revolution release is it cribs material from the previous entry in the WWE video library: Back in Black, which was released in 2002 to capitalize on their brief and underutilized resurgence, the hook of WrestleMania 18 in Toronto. Many of the principle interviews are taken directly from Back in Black and re-purposed here. Billy Kidman, Dustin Rhodes, Joe Hennig, Lex Luger, Dusty Rhodes, Arn Anderson, Matt Striker are the main contributors to The Revolution commentary with WWE road agent and NXT head trainer, Bill DeMott (Hugh Morrus), providing most of the background insight.

It seems the only recent interview on the DVD with one of the core New World Order members are the bits and pieces of an interview with Sean (X-Pac) Waltman, who mostly discusses his feud with WCW legend Ric (Nature Boy) Flair and Kevin Nash, whose comments are centred on the chaotic back room politics.

This is where things get really, really interesting. Nash and others reveal the in-fighting and problems the New World Order caused backstage. As Scott Hall puts it: “It is like Chief Jay Strongbow once told us, in this business you can either make friends or you can make money.” It seems while many profited from the New World Order, others were bulldozed into obscurity.

Revolution notes how wrestlers lobbied behind the scenes to be part of the angle-group because they knew the money, television time and push they would receive as a headlining act. How Booker T declined a New World Order offer because he thought it would weaken his persona and his future in the business. How wrestlers were bitter about some New World Order members having so much creative input, while they themselves had very little over their own characters.

“Guys were literally selling off their children to join,” remembered DeMott. “It was like a gang. It really was.”

Nash also reveals some of the in-fighting amongst New World Order members as to the direction and tone of the stable. According to Nash, he and Scott Hall always wanted the brand to move away from old school wrestling. They wanted it to embrace the dissolution of kayfabe and be more realistic in their promos, portrayals and angles. It is why, for example, they used their real names upon entering WCW.

One particular thorn in Nash’s side was the taping of the original and infamous New World Order snippet promos. After shooting some with Hogan and seeing The Hulkster rattle off four minutes of old school promo work, Nash left the studio dejected.

WCW production saved the day by making the promos black and white and cutting, editing them with a more modern, propaganda-like feel.

Comments of those who grew up with the New World Order during the ’90s, like Dustin Rhodes and Joe Hennig, really put things into perspective, especially how mainstream youth culture were drawn in by the branding, merchandising, hand-signs and catch phrases of the New World Order. Hennig’s pals named their sports team after the New World Order. Dustin remembered the catch-phrases and hand-shakes being used all over the school yard.

“It was cool to be the son of a wrestler back then,” said Rhodes.

Disks two and three of the set are a short compilation of memorable New World Order matches. The Giant versus Hollywood Hogan, Sting versus Hogan, Goldberg versus Bret Hart, The Outsiders versus Harlem Heat, Diamond Dallas Page versus Randy Savage are included, but considering how long the brand was around, the 15-match presentation seems insufficient, especially when there is no WWE material in the package.

The Blu-Ray version though does come with a worthwhile exclusive extra: a 90-minute NWO “Legends of Wrestling” round table discussion between Kevin Nash, Jim Ross, J.J. Dillon, and Michael Hayes. During the discussion Nash reveals information behind the infamous Hulk Hogan finger poke of doom, the end of Goldberg’s win streak, and several behind the scenes booking decisions. The Blu-Ray version also contains a large number of the NWO black & white vignettes that made the angle so revolutionary.

After jumping the shark with the brand split and watching many of the key players take a powder, the New World Order brand eventually was buried under its own weight as most popular things are when they are taken too far and for too long. Still, for the impact the nWo had and continues to have, it is worth owning Revolution especially if you don’t already have Back in Black in your collection. If you do, Revolution may feel more like a visit from the New World Order Sting rather than Steve Borden himself.

John Powell is a founder of SLAM! Wrestling and looks pretty good in white and black. In fact, he got married this past weekend in those very colours. Congrats John & Di!