Christopher Daniels is having the time of his life.

Teaming with his good friend Frankie Kazarian, the appletini-sipping, scarf-wearing Daniels is enjoying a career renaissance in 2012. 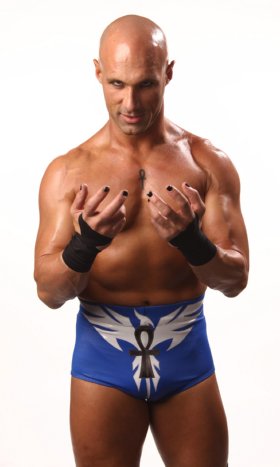 Now he and Kazarian will look further cement their status as one of the greatest tag teams going today when they challenge Chavo Guerrero and Hernandez for the TNA World Tag Team Championship this Sunday at Turning Point.

“Because we’ve been friends for the better part of 15 years, I knew we had a chemistry that would translate well in the ring,” Daniels said this week on a TNA media call. “No matter what was going to happen, we knew we were going to have fun. And now we’re having fun and success and that makes it 10 times better.

“We’re just going out there and being ourselves.”

Daniels has been in a few tag teams during his stints with TNA. He was a three-time NWA World Tag Team Champion with Triple X, two-time champ with AJ Styles and once with James Storm. But now he feels like he has something more special with Kazarian than he’s ever had.

“I feel like Frankie and I are devoting our entire mindset to making this team work,” Daniels said. “When AJ and I were put together, we had that same mindset, but we quickly realized the company thought we were better off as singles. We had such a short run together. AJ and I could’ve gone on and been a team that TNA fans look back on in the same way as America’s Most Wanted or Beer Money or the Motor City Machine Guns. But that was a company decision. I think right now, the company sees the chemistry that Frankie and I have and I think they see that we work like the sum of our parts is better than us as singles. I feel like they’re behind us in terms of getting our team together, moving forward and trying to make something historic out of it.” 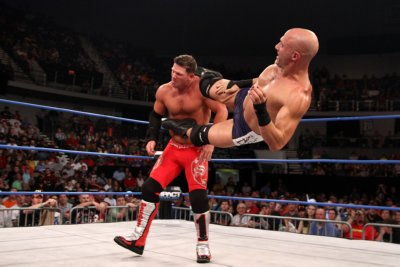 Christopher Daniels kicks — who else? — AJ Styles in the back of the head.

Despite being in the business for 20 years and having wrestled all over the world, Daniels still wants more.

As one-half of the former TNA World Tag Team Champions of the World, Daniels wants to eventually reembark on a singles career and become the TNA World Heavyweight Champion of the World.

And that’s what keeps Daniels motivated. Having goals, he said, is what keeps him going despite being 40 years old and having been in the business so long. Among them: Being world champion and regaining the tag team titles at Turning Point.

“Having those goals motivates me to stay in shape, to be in the best shape of my career, to do new things, to try different things,” Daniels said. “I know Frankie feels the same way. This team, a year ago, we were just talking about getting into it. Now we’re almost a year in and there’s still things we want to do. We want to build on this legacy and we want to be talked about as one of the best of all time and it takes time. So those are goals we’ve set for ourselves and that’s what motivates us to keep getting better.”