The Legend Killer, former member of Evolution, the youngest WWE World Heavyweight Champion in history, The Viper, the leader of the group Legacy, and the Apex Predator are just some of what describes the career of Randy Orton. However, at only a running time of 1 hour and 27 minutes and with a limited four matches, WWE’s Superstar Collection Randy Orton could not truly cover all aspects of Randy Orton’s career in World Wrestling Entertainment. Thus, the question is which period of Randy Orton’s career did they choose to focus on?

The action begins with a 3 Stages of Hell Match for the WWE Championship between Triple H and Randy Orton from June 2009. For those not familiar with the 3 Stages of Hell Match, it is essentially three matches in one. The first match is a regular wrestling match under normal rules, the second match is a Falls Count Anywhere match with no count-outs or disqualifications, and the third match is a Stretcher Match where you need to incapacitate your opponent so you can place them on a stretcher and rule them across a line at the top of the entrance ramp. Due to the variety within a 3 Stages of Hell Match it has a lot of potential to be extremely entertaining to watch, but unfortunately for this particular one the pacing in the ring seemed off. 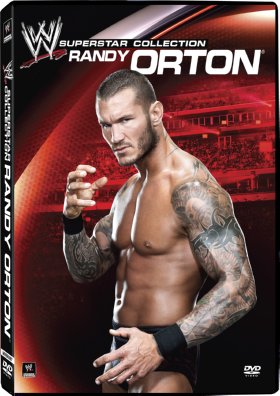 Part of the problem is that the first fall takes place at a very slow deliberate pace with little variation. As a result it’s like listening to a song sung at the same pitch throughout. However, Triple H does a hilarious and very logical move by breaking out the steel chair and pummelling Orton; it definitely helps to liven up the match. The Falls Count Anywhere match is unfortunately very short and the Stretcher match seemed disjointed and was marred by interference by other parties. In short this match wasn’t the best choice in demonstrating Orton at his best in the ring; their Wrestlemania 25 match would have been a better option as it told a far superior story and had more variety in its pacing.

The second match on the DVD is a Triple Threat Match for the WWE Championship from July of 2009 between Randy Orton, Triple H and John Cena. While the quality of the wrestling in this match is of high calibre, too much of the match has lengthy stretches where Orton is incapacitated. There are some good spots in the match though, particularly a double submission. However, a good portion of the match has Triple H and John Cena one-on-one, and considering this is supposed to be a DVD focusing on Randy Orton the choice of this match is very odd.

By this point of the DVD almost an hour of the running time has been used up, which means the remaining two matches would be much shorter. Thankfully, both are excellent choices.

The third match on the DVD is a confrontation between Randy Orton and Ted DiBiase from March of 2010, just weeks before Wrestlemania 26. The pacing of the match is quick and crisp and both wrestlers have great chemistry in the ring. Yet again, the ending is marred by interference, but that’s to be expected since this match is meant to build towards Orton’s Wrestlemania 26 match.

Yet it’s the fourth and last match that is easily the highlight of the DVD as it has Randy Orton versus Captain Charisma himself, Christian. The match is a battle for the World Heavyweight Championship from June 2011 and it is readily apparent that Christian is able to bring the best out of Orton as throughout the match you see Orton breaking out maneuvers he doesn’t usually use in matches. At one point Orton hits Christian with one of the fastest and beautiful Scoop Slams you’re ever likely to see in a match. Orton also does an excellent job of selling a storyline concussion going into the match.

The DVD unfortunately has no extras and with the first two matches that took up the first hour not being the best choices, WWE’s Superstar Collection Randy Orton kind of leaves you feeling punted in the head wishing more matches like the ones against Ted DiBiase and Christian had been included.