Steen gets dream match with Storm in Quebec City

Last Saturday, nothing was going to make Kevin Steen miss his chance to wrestle one of his idols, Lance Storm. “I had a concussion last week so I wasn’t in tip top shape,” revealed Steen after the match. But even that wasn’t enough. Steen, the new Ring of Honor champion, headlined Storm in front of a jam packed crowd in Quebec City.

“Kevin’s been hounding me for a year and a half, pretty much since the time we tagged,” said the semi-retired Storm after the match. “When I was looking at heading to Miami for the Hall of Fame, I had made a deal for the Ring of Honor show and as soon as I did that, Kevin was on the phone again and since I was getting in shape for that one I figured now is the time if we ever gonna do it.” 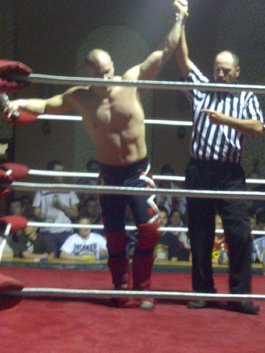 Lance Storm is the winner. Photo by Patric Laprade

“I wanted this match for 10 years,” said Steen. “I’m very satisfied with the match. It’s exactly how I thought it would be which is going against one of the best wrestlers I ever worked with. Being in the ring with him was something really special.”

Storm, the former WWE, WCW and ECW Superstar, is well known for being one of the best technician wrestlers out there and that is part of why Steen wanted this match so bad.

“When you wrestle someone like Lance Storm or Fit Finlay, you ask yourself how these guys became that good,” said Steen. “I guess it comes with experience and working with guys better than you. I’m very happy I had this chance and I want to thank NSPW for giving me this opportunity.”

Quebec City has always been good to Steen. His first big matches happened there in 2004 and 2005 when he had the chance to wrestle the likes of Christopher Daniels, Steve Corino, AJ Styles and Petey Williams.

“I came out with the ROH belt (even though it wasn’t at stake) because there were a lot of guys from Quebec City in the crowd I used to wrestle with. Many of them sent me emails after my match in Toronto to congratulate me, to tell me they were still following my career and that they were proud of me. So it was very touching and going out with the belt was a weird way to thank them, I guess,” said Steen, as it was the first time he was wrestling in La Belle Province since he became ROH World champion.

The last two years have been quite good for the NSPW promotion, but this show was the biggest it has ever produced, with a crowd close to 500 fans.

“We had 200 tickets sold in advance, 250 available the day of the show and still, we had more people coming in,” confirmed NSPW promoter Steve Boutet, very pleased of his accomplishment.

Many of them came to see Lance Storm, as there were a lot a new faces in the crowd. They were all sent home happy when they saw their favourite making Steen tap out to his Canadian Maple Leaf submission hold. “It was wonderful. I think the crowd was fantastic. It’s nice when there are more people than chairs in the building!” said the draw of the night.

Something people may not know about is that Lance Storm was also the trainer of NSPW champion Simon Martel (no relation to Rick) as the latter went to one of Storm’s camp a few years ago. They did an angle at the very end where Martel came to congratulate Storm for his win, but instead he slapped him in the face, only to get superkicked by his former trainer.

“I remember him being very very hard working and I remember he had a tremendous back bridge. I also remember him one day in class running ropes when he missed the ropes and went through, taking the top rope in the face and he needed stitches to his lip. But he didn’t take any time off and was back the next day. He was a tough kid who just wanted to work hard,” said Storm about his former student, adding he unfortunately couldn’t watch Martel’s match because it was the match just before his.

If the fans came to see Steen and Storm, they must have had a pleasant surprise when the Super Smash Bros. and Quebec City’s Michael Style and Marko Estrada stole the show with an amazing street fight tag team match.

It was quite a week-end for Stupefied and Player Uno, collectively known as the Super Smash Bros. as they were crowned the new PWG tag team champions the night before after defeating the Young Bucks in Los Angeles.

“It was also a street fight kind of match in L.A.,” pointed out the Smash Brothers, who are also the NSPW tag team champions, almost wondering how they pulled two matches like these in a row.

As for Stupefied, he was also up for a surprise when it was announced that he would be wrestling Chavo Guerrero Jr. on October 13 for NSPW fourth anniversary show.

“I’m really looking forward to this as Chavo Guerrero is the kind of wrestler I’ve never had the chance to work with. I’m psyched about it,” said Stupefied.

All in all, it was a very good show that fans seemed to have enjoyed from top to bottom.

The show was called Golden Opportunity IV and it was indeed a golden opportunity for many people. This might not be WWE or TNA, but this is what independent wrestling is all about: to take these opportunities and to run with it.

And that is exactly what Kevin Steen, the Super Smash Bros. and the NSPW did.