TORONTO – A business traveler stopping overnight at the Doubletree By Hilton Hotel might be a little confused at the amount of spandex and sparkles found this weekend. While downstairs a teenage dance competition was taking place, the upstairs ballroom featured a different kind of battle, as two nights of professional wrestling took place. WrestleReunion arrived in Toronto and what a weekend it was.

Friday saw special events for the VIP package guests. Legendary wrestling journalist Bill Apter, Jimmy Hart and JJ Dillon had one-hour question and answer events in the afternoon. At 5:00 the headliner for the weekend “Rowdy” Roddy Piper was featured in a Q&A. The question part was limited, as when Piper gets going his stories branch out in a lot of directions, but the man is definitely entertaining. The first day wrapped up with Evolve 11 presenting an internet pay per view. 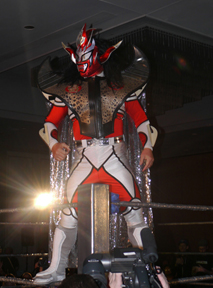 Presales for the event had been much lower then expected for a convention featuring Piper, the final Toronto appearance of Bruno Sammartino, Japanese legend Jushin “Thunder” Liger, and a reunited Rick Martel and Tito Santana. It was a pleasant surprise then when Torontonians showed they wanted a convention of this caliber in their city with an impressive walk up crowd that kept the room hopping from 9am to 6pm. There was lots to keep them occupied including perusing action figures and DVDs, checking out history at the Pro Wrestling Hall of Fame booth, and of course meeting wrestlers.

WrestleReunion has always striven to offer something unique for fans to take home. Their talented, hard working photo team captured in ring photographs with “Mean” Gene Okerlund, Vader and Liger in full wrestling gear and the lovely Miss Tessmacher in a bikini. An ECW reunion photo featuring Tommy Dreamer, Rhino, Shane Douglas, Raven, and CW Anderson was a popular choice. Piper took photos and signed autographs in a replica Piper’s Pit set. The longest line of the convention, Piper took time to speak to each and every person. It was both awesome and aggravating as the line moved very slowly at times as he would sometimes speak for a couple of minutes to one individual. It made for some pretty special moments, such as a meeting between 4 year old David and Piper that left the little guy, who wasn’t even alive when Piper was an active wrestler, beaming.

The main day of the convention wrapped up with the Pro Wrestling Superstars show. Featuring a mix of independent talents and legends it was a great mix of the past and future of professional wrestling. Clocking in at just under four hours did make for a long night and something that should be streamlined in the future as some of the bouts ran too long. A special “Pipers Pit” with Bruno Sammartino was further tribute to Bruno. Harry Smith vs. Fit Finlay and Roderick Strong vs. Jushin Liger were the best matches on the show, which was headlined by an ECW style bout pitting Tommy Dreamer and Rhino against Raven and CW Anderson. It was a nice nod to the fact that Toronto hosted an ECW show and their talent has frequently appeared here, and the opportunity for people who never saw ECW live to get a taste of it. Dreamer sent Anderson crashing through a table with the death valley driver to send the fans home happy.

The weekend wrapped up with SLAM! Wrestling’s Greg Oliver hosting Titans in Toronto 5, a breakfast fundraiser for the Amsterdam, NY Pro Wrestling Hall of Fame. Ticket holders shared tables and stories over eggs and bacon with convention guests as well as local legends like Sweet Daddy Siki and “Wolfman” Willie Farkus. Sammartino was the keynote speaker sharing stories and memories of Toronto and received a standing ovation from wrestlers and fans alike.

It is difficult to truly capture in a review piece exactly what this experience was. Unless you are there you can’t grasp how special it really is. Wrestlers were gracious and friendly, the wrestling shows were solid and there really was something for everybody. In the fans eyes the convention couldn’t be called anything less then a success. It did have its struggles with border and talent issues but overall things went smoothly. Initially it seemed like there was 0 chance of WrestleReunion returning to Toronto but with the support that ended up coming through that chance may have increased. Even if this weekend was a one time occurrence, they should be incredibly proud of what happened April 13th – 15th in Toronto.

Jason Clevett is in his hotel room reflecting on his fourth WrestleReunion. He is thankful he not only got to hang out with some amazing wrestlers, but some pretty cool SLAM! Wrestling folks as well. Thanks for the memories.