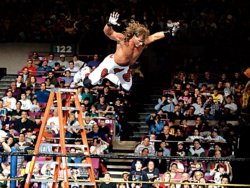 The moment: A match that changed everything

Recently, ladder matches have become a staple of WrestleMania. Whether it was the famous TLC match at WrestleMania X-7, or the Money in the Bank matches at WrestleMania 21-26, these matches have always been action-packed and generally regarded as the highlight of whatever show they were on. But we can’t forget where it all started.

Both Razor Ramon and Shawn Michaels laid claim to the Intercontinental Championship in early 1994, so it was decided the two would battle it out in a ladder match with the belts suspended high above the ring.

The innovation seen in this match was outstanding. Looking back at it today, because of what we’ve seen since, it doesn’t seem like much, but for the era this took place in, this was at the absolute top of the food chain. This really was the beginning of Michaels’ tenure as “Mr. WrestleMania.”

These two had their working boots on. Michaels hit an elbow drop from the ladder despite his entire rear-end hanging out for the world to see. He followed that up with a splash from the top of the ladder, a move still seen on WWE television to this day. Eventually, though, it was Ramon who able to knock Michaels off a ladder, which hooked his foot in the ropes. With his opponent hung up, Ramon scaled the ladder and pulled down the titles to become the undisputed champion.

These two wrote the playbook on the ladder match and it still stands to this day.

No. 10 – The Ultimate Challenge

There was a moment in the 1990 Royal Rumble when it came down to Hulk Hogan and The Ultimate Warrior.

“And look at this! Look at this!,” Jesse Ventura exclaimed. “Hulk Hogan and the Warrior!”

“There is not a person sitting down, everyone on their feet,” Tony Schiavone followed.

The Rumble was a precursor to “The Ultimate Challenge” at WrestleMania VI, a winner take all match for the World Wrestling Federation Championship and the Intercontinental Championship.

This match had no business being as good as it was, especially considering it was nearly 23 minutes long. Hogan and Warrior went out and had a match that by no means was a technical classic, but will be remembered forever as one of the most classic matches in WrestleMania history.

This was a power match through and through. Both men showing off how strong they were with the famous Greco-Roman Knuckle Lock. After a long battle, Warrior would fire up and hit the Gorilla Press and splash, but Hogan would emphatically kick out and Hulk Up. Hogan hit the big boot but Warrior moved out of the way of the leg drop, hit another splash and won the title. 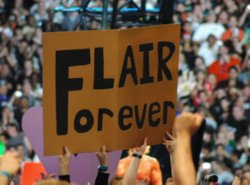 A sign in the crowd at WrestleMania 24. Photo by Mike Mastrandrea

It was fairly obvious to anyone that WrestleMania 24 would be Ric Flair’s last match. When it was announced his opponent for that night would be “Mr. WrestleMania” himself, Shawn Michaels, well, the game changed.

Sporting a classic Ric Flair robe, Flair entered the stadium for his career threatening match with much pomp and circumstance. Fireworks lit up the sky and it seemed like nearly every fan in the ringside area held up either a “W” or “OOOOOOOOOOOOOOO” sign as Flair walked that aisle for the last time. They were here to see Flair.

On this night, Flair was again the Dirtiest Player in the Game. Chop blocks, eye pokes, low blows, the whole bag of tricks were there.

Flair followed an inside cradle attempt with his signature Figure Four Leg Lock, but Michaels was able to get to the ropes after a struggle. But it wasn’t too long after that when Flair walked right into Sweet Chin Music, but Michaels was unable to cover in time.

The two continued, trading chops until Michaels landed another super kick. But instead of going for the cover, Michaels backed off and stood up in the corner, waiting for Flair to rise again. With Flair telling Michaels to bring it, Michaels said, “I’m sorry, I love you” and delivered a third and final Sweet Chin Music, ending Flair’s career.

Michaels left the ring immediately, allowing Flair to soak in the final moments of his career as he took the long walk to the back one last time to a standing ovation from the nearly 75,000 fans in attendance.

The moment: The first WrestleMania

It’s no secret the first WrestleMania was a big risk for Vince McMahon. In the end, it paid off and has become a can’t-miss event and the company’s biggest cash cow each year.

Promoted as “The Greatest Wrestling Event of All Time!” the show was broadcast across the country on closed circuit and quite possibly is the most important wrestling event of all time.

The show featured celebrity guests up and down the card. Billy Martin was there as was Cyndi Lauper. Liberace was there dancing with The Rockettes. But the biggest celebrity of all was Muhammad Ali, who served as the special ringside enforcer for the main event that pitted Hulk Hogan and Mr. T against “Rowdy” Roddy Piper and Paul Orndorff.

The success of WrestleMania set the tone for years to come. Now WrestleMania is held in front of crowds in excess of 60,000 each year and broadcast to a worldwide television audience. It has become a spectacle, but wouldn’t have been possible without the first one. 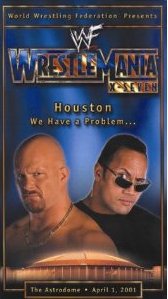 WrestleMania X-7 was the middle of the epic Rock vs Austin battles.

And what matches they had. At WrestleMania XV, the two met for Rock’s World Wrestling Federation Championship. It was Austin who came out on top that night.

But it was two years later, in front of 67,925 fans at the Astrodome that the two cemented their places in wrestling history with one of the most captivating WrestleMania main events ever. In a no holds barred match for The Rock’s WWF Championship, it was Austin who sided with long-time rival Vince McMahon to win the title, blasting Rock with several chair shots before pinning him, turning heel in front of what essentially was his hometown.

Two years later, the two met again with nothing but pride on the line. Down 2-0 in their WrestleMania series, The Rock was looking to extract some measure of revenge against Austin as one of four main events on the show.

This was a historic match as it marked Austin’s final match, as he would quietly retire from in-ring competition due to a lingering neck injury. Again, the two pulled out all the stops. Stunners, Rock Bottoms, People’s Elbows. But it was The Rock who did gain that bit of revenge, finally pinning Austin after a third Rock Bottom.