A conversation with a Stratusfactory Bounty Hunter

Over the past few years, I’ve had the opportunity to talk with former WWE Women’s champion Trish Stratus on several occasions.

Between WWE press conferences, news-breakers and stops along promo tours for Stratusphere Yoga and, of course, the path to today’s launch of her new flick Bounty Hunters, I’ve had the opportunity to chat with Trish on several occasions, and as a result our conversations tend to stray over a number of topics, ranging from her next big project to my books and, of course, the mat wars.

Ah yes, the wrestling chatter. Not every story on Trish, as longtime SLAM! Wrestling fans know, focuses on wrestling. Between appearing with Second City, launching her yoga studio and going on tour for her workout DVD, Trish may be the busiest woman in Canada; but even mired in the deepest part of a media frenzy around her soon-to launch-DVD, which includes tonight’s red carpet premiere event, there’s a side to Trish that is still the same wrestling fan who willingly waxes squared circle poetics when given the chance. 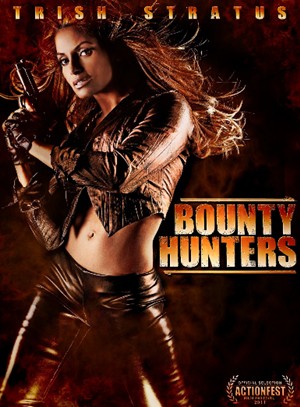 But more on that in a bit.

So as was intended, we started talking about the premier of Bounty Hunters, which is getting the red carpet treatment tonight in downtown Toronto. The project has been almost two years in production, from the time Trish began training for the role in 2010, to filming, to film festival inclusions and U.S. and worldwide distribution, through to today’s event.

Needless to say, for a person like Trish who likes to get involved in so many aspects of anything she works on, there is a feeling of “finally!” now that the big launch day is here.

“Now it’s like ‘ahh’ — a big sigh of relief; we’re finally, here. Now I’ll have 300 of my closest friends, family and fans there. I couldn’t ask for a better moment,” she told SLAM! Wrestling. (Through her website, Trish later announced that a Q&A and autograph session will take place after the event.)

Make no mistake about it though — Trish takes pride in this work. Without spoiling too much about the movie, Trish does get to showcase some parts of the wrestling world, something rarely seen in mainstream movies (Trish referenced Scarlett Johansson’s performance in Iron Man as one of the few examples of this).

So what happens next for Trish? Well, that’s a bit of a mystery. Rather than leak anything right away, Trish opined that “the next day (the day after the launch) will be a nice, restful day.” Naturally, I couldn’t help but openly challenge her on that. After all, this was the same person that probably plans more in a day than most of us do in a week.

So the conversation then drifted, as alluded to earlier, about wrestling. The much talked about Tweets from Trish in regards to current WWE Diva’s champ Beth Phoenix have led many to speculate that the Toronto-born-and-proud Stratus will be entering WrestleMania XXVIII to face Phoenix. Trish, naturally, played it a little coy, saying nothing had been planned. But she did leave a little wonderment.

“She thinks she’s most dominant, I believe I am. So…” Trish said alongside her signature laugh.

And to show that Trish hasn’t completely turned off her TV amidst her crazy schedule, she went on to talk about how she sees positives in what has happened recently with the likes of Kelly Kelly, Eve Torres and Natalya. In talking about Eve’s recent heel turn, which was chided by many wrestling pundits, Trish remarks that, “whether you agree or disagree with the actual angle, the bottom line is it’s character development, and that’s a good thing for the Women’s division.”

So with all that in mind, I wish Trish nothing but the best tonight, one of the biggest nights of her budding movie career.

Now about that screening in Winnipeg…