The world of Internet pay-per-view may never be the same after Inter Species Wrestling enters the market on Friday.

Inter Species Wrestling was started by Mike “Rotch” Woods back in 2005 with the firmly held belief that there would not be another event after the first one. 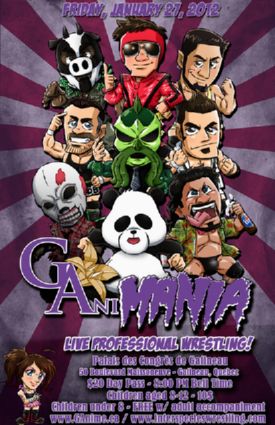 “Inter Species Wrestling is pro wrestling for people who are not fans of pro wrestling,” Woods told SLAM! Wrestling. “Our shows have a party atmosphere, and wrestlers love working for us because there are no politics or BS. If you have a problem with someone in the locker room, you have to keep it to yourself, because we’re one big happy family as long as we’re under that Inter Species Wrestling banner. We put on shows that are include a perfect blend of crude humor, silliness, and gimmicks — but the emphasis is on the wrestling. People tend to overlook it, but we’ve put on some real solid wrestling. We like our wrestling to be fun, because it’s still fun for all of us.”

Primarily based in Montreal, the ISW has promoted shows around Quebec and into the United States. “We’re like pro wrestling’s traveling sideshow,” quipped Woods.

The inaugural pay-per-view six-match line up includes; the first ever Ganime wrestling Championship tournament which will involve a six-man, two-round tournament — consisting of two three-way semifinal matches, a singles match final, Shitty versus Dustin Beaver, and an open challenge by Bastian Snow (the aforementioned lobster).

The event takes place as a part of the GAnime fan fest for anime in Gatineau, Quebec going on this weekend. Tickets to GAnime get fans in for the whole day of the convention, including seminars and dancing, and access to the vendors.

“This opportunity sort of fell into our lap,” said Woods. “The parent media company for the Ganime convention — Hyberia — are a bunch of super-smart tech wizards, and they came to us with a list of equipment and capabilities, with one of them being a live broadcast. We jumped all over it.”

Woods said that it is a good fit between anime and the ISW.

“Our shows are so character heavy, that they almost come off as a live action cartoon, you know? And for years, people told us that we’d be a hit at a comic or anime convention,” Woods explained. “We’d done other events — such as multiple appearances as part of the Vans Warped Tour — but every time we contacted a convention, they weren’t interested for some reason or another. A friend of mine mentioned the G-Anime convention in passing one day, and my ears perked. We got in contact with the people in charge, and they welcomed us with open arms. Gatineau is real close to my hometown of Ottawa, and I’ve always wanted to run a show in or close to my hometown. For the first time ever, we’re presenting an all-ages, family friendly event. I’m happy that my eight-year-old niece and 11-year-old brother can attend one of my shows.”

At $5 for the Internet-PPV, it won’t exactly break anyone’s bank account.

“Internet pay-per-view is the latest craze among the independent promotions, and something we’ve wanted to try for a while,” said Woods. “Every time we schedule an event, we have fans from all over who tell us it’s too far, or that they can’t make it. Internet pay per view allows those folks, and folks from overseas to check out an Inter Species Wrestling show live as it happens. There’s something real cool about that, and that’s why we’ve wanted to jump on the i-PPV bandwagon.”

The Inter Species Wrestling goes down on Friday a 8 p.m. ET. To see it live, head to www.tikilive.com/show/ganime.

— with files from Daniel Gerecht