A wrestling territory is made up of far more than just the big-name wrestlers. This Friday in Los Angeles, as a part of the WrestleReunion convention, headliners like The Destroyer will mix once again with the enhancement talent, announcers, referees, office workers, and media from the old L.A. territory, based out of the Olympic Auditorium.

The two-hour salute — “Tribute to Southern California wrestling” — starts at noon on Friday, January 27th, at the Westin Hotel near the Los Angeles Airport. It is the brainchild of Dr. Mike Lano, a dentist/photographer, who shot many bouts in the area. 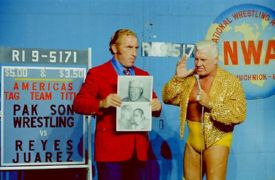 “I really wanted something, some event to connect these great annual conventions in L.A., to what was for decades, one of the best and most influential territories in wrestling since the ’30s,” said Lano, an occasional SLAM! Wrestling contributor, in an email. “Every territory was unique and amazing. We all loved whatever our home was. The Los Angeles/Hollywood office was my home base shooting for the program, and the love we all feel for it will be in evidence this Friday at the Olympic Auditorium. Er, L.A. Westin Hotel, as part of WrestleReunion.”

The two key names most associated with the territory confirmed for the event are “Judo” Gene LeBell, who is the brother of the late promoter, Mike Lebell, and served as the territory’s policeman as well as announcer, and The Sensational, Intelligent Destroyer, Dick Beyer, who held the promotion’s World title.

But the only real representative of the booking office is publicist Jeff Walton, who was later manager Tux Newman in Memphis.

“I’m looking forward to it, but I’m looking forward more to representing the office, because really, it’s a shame, everyone’s gone — [Charlie] Moto, [Jules] Strongbow, Mike Lebell, [Fred] Blassie, some of the other boys that were in the office for the regular weekly meetings. Nobody’s around,” said Walton, who wrote the closest thing that exists to a history book on the territory, Richmond 9-5171, A Wrestling Story. “Gene LeBell never really spent time in the office. It was always movies, stunt work, and all that stuff. If Mike needed him to do some announcing stuff and whatever, I would have to go out to Gene’s place and usually coach him on that.”

“If you’re into those wonderful years when you watched Championship Wrestling from the Olympic on KTLA or KCOP TV you’ll want to attend this event,” reads the preview. “Many unpublished photos and slides will be shown set to ’60s and ’70s audio.”

Lano said that about a third of the event will feature slides on L.A. wrestling history, the Olympic Auditorium and TV studios, followed by rare handheld and original television from 1961-1982.

Many of the stars on hand will get a chance to share their memories as well, and there will be a ton of family members there too, from the son of John Tolos to the various relations of the Torres brothers.

“It’s an exhausting labor of love,” said Lano, who ran a similar event in St Louis in 1993. “I’m even having a smoke machine for just a hint of fog to recreate what the smoke-filled Olympic Aud used to look like. Going for the closest to the experience of being in the Olympic Aud — from the monthly lucky number contests, to Ernestine the Chicken Lady at Ringside (holding up the rubber chicken) to Jimmy Lennon’s voice continually echoing quietly, ‘Ladies and Gentlemen …here we go!'”

The event is available to WrestleReunion VIP ticketholders.

“In the two hours, from 12 to 2, there’s going to be a lot going on. I think it will be a real interesting part of this WrestleReunion convention,” concluded Walton, wishing that he’d thought of doing something similar years ago when the likes of Fred Blassie and John Tolos were still around. “A little bit of history goes a long way.”