Shows in Canada are always special for Natalya, but when they are close enough to Calgary, well, watch out. On Saturday and Sunday at WWE’s two shows in British Columbia, the Diva is expecting at couple of carloads of Harts.

“My family is so wonderful, loving and supportive,” Natalya Neidhart told SLAM! Wrestling on Thursday. “I still have several family members that are all pumped up about going out there, they’re driving out there for the shows to see me. It’s great, it’s great to have them care so much. So, yeah, lots of ticket requests.” 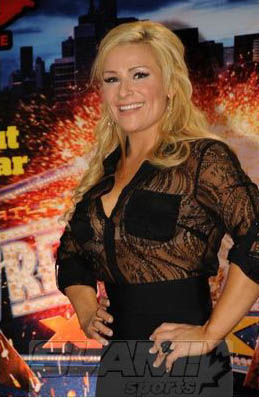 By now, she’s used to the grind of the WWE travel, which will take her from her Florida home across the continent to Vancouver and then Prince George. The Smackdown-flavoured shows feature World champion Daniel Bryan, The Big Show, Mark Henry, Sheamus, Alicia Fox, and more.

While on the road, she keeps occupied, when she’s not napping on the plane.

“I have a lot of projects going on, so I’m usually pretty busy. Between keeping a journal, reading a lot of books, I try to keep myself busy,” she said.

Like her uncle, Bret Hart, who kept track of much of his storied career through his writings and recordings, Natalya is fanatical about her journal.

“I keep track of everything,” she emphasized, explaining that means everything from who she faces at a show and how the crowd reacted to who she might have argued with backstage or what she had for lunch.

“I keep very detailed, meticulous notes of my life, and it’s totally inspired by my Uncle Bret. My uncle, I guess since we lost my Grandfather Stu, Bret has sort of been the patriarch of our family ever since then. He taught me a lot about basically keeping track of your travels, enjoying these special moments,” she said.

The Hitman has been very supportive of the third-generation Harts, including Natalya, David Hart Smith and Tyson Kidd, an adopted member of the family.

Natalya keeps Bret a part of her life. “I write him, even on my travels, I write him long emails and things to really document my feelings — not just in journals, I like to write him letters, telling him how I feel. It’s funny because a few years ago, we discovered some old letters my Uncle Owen had written, and they were beautiful letters about his travels in WWE, how much fun he was having and what it was like over in Europe. You can’t ever lose sight of these extraordinary journeys that we have. I keep very meticulous journals and details on my life, here, in this company, because here’s something, I’m touching my dream, I’m living my dream.”

There will be a purpose to it all, Natalya promised. “I definitely, 100 per cent guarantee that I’m going to write a book one day. Writing is one of my passions in my life, and I definitely want to share with the world my experiences, in and out of WWE.”

The move to social media has allowed Natalya to share those experiences with fans in ways just not possible in the era her father and uncles worked in, let alone her grandfather.

“I think social media’s important, because it’s a way for people to feel connected to us. It’s funny, but a long time ago, there wasn’t really a way for us to connect with our WWE fans,” she explained. “You’d get fan mail, open it up and write them back, and hope that they wouldn’t stalk you.”

An early adopter of MySpace, well before ever being signed by WWE, Natalya comes by the current trend naturally.

“Nowadays with Facebook, Twitter and that sort of thing, I keep in touch with a lot of my fans. I have over 200,000 followers on Twitter, and people will ask me questions. It’s a great way to get feedback from them. It’s become huge, something that can’t be ignored. It’s great because WWE has really taken to Twitter too, and kind of acknowledged and recognized that Twitter is so important and social media is so important, because it’s a great way to spread the word about an event, or send a message, or to see who the fans are rallying behind, just see who people are interested in.”

It has touched her in unique ways too, including recently arranging a meeting with a fan she met online. “Their child had special needs, and it was great to interact with them and make a difference.”

Natalya admits there is the inevitable negative feedback, though.

“Every Diva has her ego fortified, too.”