Attempting to describe Highspots.com’s ongoing DVD/download series $5 Wrestling is like trying to sum up Mystery Science Theater 3000 to someone who’s never seen or heard of that campy, sardonic sci-fi series. Take away the silly, rubber movie monsters and outer space setting and the two are very much alike. 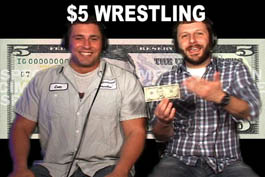 In the wacky, assumedly unscripted world of $5 Wrestling, three witty personalities schooled on the indie wrestling scene — former NWA world champ and WWE superstar Colt Cabana (who competed in the ‘E as Scotty Goldman), wrestler/Highspots employee “Manscout” Jake Manning and Chicago comedian Marty DeRosa — bring you the action each go-round. Episodes feature POV commentary (we see the backs of Cabana and DeRosa’s heads as they mischievously call the shots), much like the sarcastic play-by-play that defined the aforementioned spoof series.

But, instead of screening low-budget sci-fi and horror flicks, the $5 Wrestling team’s mission is to bring us low-budget — if not also “budget conscious” — wrestling. In fact, several of the matches featured on the DVDs may very well be some of the lowest budget rasslin’ around. The series is the brainchild of Manning and most of the featured competitors are regulars on the North Carolina independent circuit, where a high school gym crowd of 100-200 is considered a big house.

“The concept and idea is all Jake Manning’s, who works at Highspots down in North Carolina,” Cabana explained to SLAM! Wrestling. “Jake also put out a cult-hit DVD years back called Heroes of Burke County. The whole (series) is based off the success of that one DVD. There’s so much ‘dodgy’ wrestling in North Carolina, but nobody outside those circles really knew it was happening or going on. What kind of press are these guys going to get? None! That’s because the wrestling isn’t comparable to what you see from some of the top professionals around the world. So, Jake wanted to film it (and) have some of the wittier, high-profile wrestlers do commentary over it.”

So far, $5 Wrestling has seven volumes in its DVD cannon. The title is no joke, either. Each volume is available for just five singles, as are video downloads of the product. One can naturally assume that the admission price to a $5 Wrestling house show is the same, as well. Anyone who’s ever attended a wrestling show held at a school gym, flea market or National Guard Armory should be able to empathize when watching what transpires. “We’re doing different series because each DVD should have a theme,” said Cabana. “(The first two volumes) introduce you to the whole concept. The others are just to flair it up a little bit.”

Filmed in front of what Cabana says was a “standing-room only” live studio audience the night before Wrestlemania 27, $5 Wrestling: Live — the third volume in the series — billed itself as the cheapest ticket in Atlanta that weekend. That could be because no actual live wrestling took place that night. Instead, as seen on the DVD, Cabana and DeRosa comically call the shots as the audience gathered at Atlanta’s Academy Theatre watches and chuckles along to such former WWE and WCW mainstays as Jim “The Anvil” Neidhart, Tracy Smothers and Jimmy “Superfly” Snuka competing in less-than-legendary, prerecorded contests against such $5 foes as Legion (managed by Percy “Paul Bearer” Pringle), the Metal Maniac and the Juggulator. “We missed the Russian National Anthem but Blue Thunder will be singing the Parts Unknown National Anthem,” cracks DeRosa as a match between Nikolai Volkoff and Road Warrior wanna-be Blue Thunder (that was apparently salvaged from the archives of the bygone WWWA promotion) gets underway. Again, the commentary proves just as entertaining, if not more so, than what’s going on inside the ring.

“I knew it would be a great concept, but then I had the idea to also bring comedians into the fold. There are a lot of comedians who straight up LOVE pro-wrestling and are very knowledgeable about it,” said Cabana. “The first guy I thought of was Marty DeRosa, this very quick-witted comedian out of Chicago. Marty loves wrestling and is a hilarious stand-up. He and I did the first series and we had great chemistry right away. I think the $5 Wrestling commentary has benefited from Marty and I becoming better friends as our taste in comedy and wrestling are very coherent and (we’re) able to adapt (it) to the small screen.”

For the $5 Wrestling Tournament of Champions disc, an assemblage of strange men holding even stranger-looking belts convene on what looks to be a much less-than-half-full high school gym to battle for supremacy. Since there’s a cartoon swashbuckler painted on the gym wall, we must assume the school’s sports team of choice is the Pirates. In fact, when you find out where some of the tourney competitors won their prized belts, the gym actually begins to look more like the big leagues.

Diminutive, pot-bellied “America’s champion” Raider Rock captured his strap at “someone’s birthday party.” Proud “New Generation” titleholder Dyn-O-Mite (He’s “just that good,” yep, he’s “just that good”) won his championship at (where else?) church. The man upstairs must be on his side because, as the bragadocious Dyn-O-Mite tells Manning, he’s held his belt a full six years, during which he’s defended it an astounding 13 times.

“These guys have all been wrestling around that North Carolina area for years. It’s all just perception,” related Cabana. “For years, nobody perceived them as stars. The reality is, people love these guys. It just took the right format and the right kind of spotlight to put on them. More people now know who ($5 Wrestling champion) Freight Train is than (know who) half the guys I do smaller shows with on a regular basis are.”

The latest three installments in the series strive to bring the ramshackle fed. into the living rooms of diehard WWE fans — perhaps on a Wednesday or Tuesday night — by spoofing some of sports entertainment’s stalwart programs.

There’s $5 RAWR — the $5 version of Monday Night Raw, Tuff Enuff (a jest to the recently revived semi-reality wrestling show) and Road Trip: Cleveland, in which the $5 caravan rolls into the Rock ‘n’ Roll Hall of Fame city. Several talents who toughed it out in the tourney of champions — including half-decade titleholder Dyn-O-Mite, “gay pride champion” T-Dawg HG, Freight Train (who’s awfully proud of his “smooth, smooth belly”) and monotone madman Raider Rock — are back in these volumes with rest holds, eye gouges and bungled promos to spare.

In Tuff Enuff, six contestants compete for a slot in the $5 roster. “Only one could win … because that’s all we could afford to hire,” reads the disc’s tagline. Road Trip: Cleveland brings lesser-seen personalities like Kookamunga, G-Moe and Al Koholic into the spotlight.

Will Dyn-O-Mite be able to fend off Freight Train’ s “choo-choo” and hold onto his strap for a seventh season? Will the Tazz-like Rollo Samoa lay down his red and black singlet for a spot in the commentary booth? Will viewers find out whether the American Idiot is actually a poorly disguised Raider Rock in the worst executed masked man scenario since Dusty Rhodes-Midnight Rider and/or Bruiser Brody-Red River Jack?

Well, suggests Cabana, you’ll just have to plunk down a 5-spot or two to find out.

“We just finished up on a couple of new $5 DVDs that will be out eventually at Highspots.com,” said the journeyman wrestler/host. “Last year, the night before Wrestlemania in Atlanta, we had the live show that was a great success. In 2012, we plan on doing the same thing in Miami as a part of WrestleReunion. We look forward to doing the live show again and inviting our friends down to come do commentary with us. The key is not to put the product on a pedestal, but to take it for what it is. It only costs $5 and it’s a lot of fun. It’s meant for anyone who has ever liked wrestling to gather some friends around and have a laugh — the ultimate pre-party activity!”

Mike Andrews has seen plenty of wrestling held in armories, flea markets and high school gyms and thinks, for $5, the experience itself is worth a go.