They were the original voices of the voiceless. But it seems like wrestling managers have gradually disappeared. Or have they? The new generation thinks not.

“I am making it my personal goal to bring managers back,” said Ring of Honor’s Truth Martini.

That trend may have already started. However, there was a time at the beginning of the century, when managers seemed non-existent. But there were certainly a lot of valets, which is how women such as Trish Stratus, Lita and Stacy Keibler got their start. 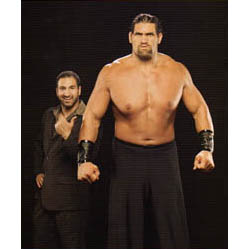 The size difference between manager Daivari and The Great Khali made for a memorable visual.

Then along came a little promotion called ECW, which had a reputation for being different. And perhaps the one manager of this generation who set the bar for being different was James Mitchell, otherwise known as Sinister Minister.

“When I did the Sinister Minister character in ECW, I was starting to get over as a babyface,” Mitchell said. “And ECW was the inverse to everything else that was happening in the business, so it’s only natural that the devil would be the babyface. Sinister Minister was sort of a humorous trickster and that eventually evolved into the more serious, unrepentant sociopath that I became in TNA.”

Of course, the former promoter of ECW was no stranger to managing, himself. Paul Heyman was manager Paul E. Dangerously in the ’80s and ’90s. But after ECW folded in 2001, he worked as a commentator in the WWE, only to be replaced later that year, by the returning Jerry Lawler. Heyman then reemerged the following year, not as a manager, but as an agent for current UFC star Brock Lesnar. However, Heyman did essentially play the same role.

Another man who reprised his role as a manager in the WWE, after spending his early years in the company as a referee, was the current Smackdown General Manager Theodore Long. Long represented a number of African-American athletes, whom he believed were being held back, due to racial prejudice. One of those protégés was the current World Heavyweight Champion Mark Henry. Henry then disappeared from TV for a while, only to return in 2006 with a new manager, Melina. But Melina, who had too many protégés already, then offered Henry’s services to Shawn Daivari, who just had a falling out with a former protégé of his, Kurt Angle.

“The manager and protégé relationship is like a prison sentence. You spend about nine months with these guys and I actually spent more time with them than my own wife at the time,” Daivari said. “When I was managing Kurt Angle or Mark Henry or The Great Khali, I was able to write cheques, and my ass could cash it in, because I was either standing behind the greatest wrestler in the world, or the world’s strongest man, or the largest athlete in the WWE. I was able to talk shit unmercifully. But when I was managing Muhammad (Hassan), I was always scared and would shy away from The Undertaker. It wasn’t the same type of character.”

The year 2006 was also the one that Tony Atlas was inducted into the WWE Hall of Fame. And believe it or not, Atlas also managed Mark Henry a couple years later.

“They (WWE) needed somebody to train Mark Henry in the gym, as far as bodybuilding is concerned. I always considered Mark Henry and I like a father and son; he was like the son I never had. But in Mark Henry’s words, I was more like a big brother,” Atlas said. “I think Mark’s push is long overdue. Back in the ’70s, a guy like him could have been world champion immediately. He’s such a great athlete. How many 400-pound guys can slam dunk a basketball? I remember back in 1974, a wrestler by the name of Johnny Weaver said, ‘Tony, one of these days, all wrestlers are going to look like you. And there’s going to be some big fat guy who is the world champion.'”

It’s common knowledge that not everybody is going to get along with everybody else. Sometimes, managers and protégés or even tag team partners can’t stand each other. But that was rarely the case with Atlas and Henry.

“Everybody has a different personality. But the reason that we’re called professional athletes, with the key word being professional, is that we can put our personal problems aside and get it together on camera, because the fans pay to be entertained by us. Also, we don’t want to involve the entire locker room in our problem,” Atlas said. “I pissed him (Henry) off one time. But you don’t want to piss off a guy who can push a Greyhound bus uphill.”

Daivari and Mark Henry’s partnership was short-lived, as the WWE was about to introduce a new character, The Great Khali, who desperately needed a manager himself. And because there was a shortage of managers at the time, Daivari was the man for the job.

“When you’re in the business, you don’t realize how normal eyes would see The Great Khali,” Daivari said. “We would walk into Denny’s and I would think of it as me having lunch with my friend, but average people would wonder what a 7-footer was doing eating lunch at Denny’s. We also used to drive around with the midget and everyone would look and think, ‘Why’s a midget, a terrorist and a monster going into a car together?'”

Shortly after Daivari left the company, Khali was paired with a new manager or translator as he was called, Ranjan Singh, who was later revealed to also be Khali’s brother. 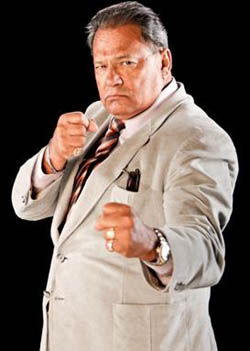 The bond between brothers is a sacred one, but what about the bond between father and son? Very few fathers can describe the feeling of managing their own sons. But Chavo Guerrero Sr. was fortunate enough to experience it.

“I came in for the Eddie [Guerrero] and Chavo [Guerrero Jr.] angle, and I was originally brought in on a trial basis. But I started to get over, so they offered me a contract,” Guerrero said.

As a former wrestler himself, Guerrero understood how to get heat for both himself and his son. He really enjoyed his run as a manager, and was even available for in-ring competition if required.

“As a manager, you could draw the ref away from the action, but not take any heat away from your wrestler,” Guerrero said. “For the match between Chavo and Jackie [Moore], I was on the outside and would always be moving. I was aware that the camera is always on and I knew exactly how to react and at what time. She would win the title and I would just throw my hands up and my facials would tell the story.”

While the WWE was experimenting with new managers, other promotions were slowly starting to jump on that bandwagon as well. Scott D’Amore was making a name for himself in TNA as the coach of Team Canada. Mitchell also got a fresh run in TNA, playing a tweaked version of his previous characters, and using his real name. He immediately started being paired with some of the monsters of the business, which was quite the familiar role for him. 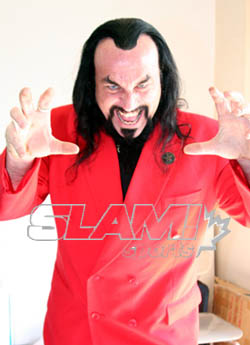 “I was always the go-to guy for monsters and freaks. With a traditional wrestler, I talk more about his athletic prowess, but with a monster, I talk about the impending carnage,” Mitchell said. “I was once told to refer to myself as being evil in an interview, which was pretty stupid. Truly evil people don’t see themselves as being evil. That’s a label, used by the victims of their misdeeds. As far as portraying a villain overall, it was the funnest job in the world.”

Ring of Honor caught on to that trend as well and introduced Prince Nana, a character who claims to be an heir to the throne of Ashanti in Ghana, West Africa. Truth Martini also burst onto the scene as the promotion’s life intervention expert. Martini originally trained to be a wrestler, but an injury in 2005 cut his in-ring career short. However, he was able to turn a negative into a positive and is currently one of the most outspoken managers in the business today. 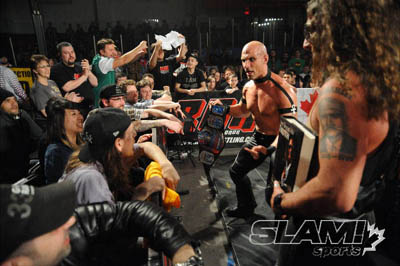 Truth Martini oversees the management of his client Christopher Daniels in Ring of Honor. Photo by Mike Mastrandrea

“It was actually Jimmy Jacobs who got me a tryout with ROH as a manager, and then Jim Cornette kind of took me under his wing,” Martini said. “Managers usually get paired with wrestlers who are missing a certain something. I don’t take typical back bumps because of my neck problems, but I kind of bump without bumping. As I take a move, I land on my feet first, and actually make it look more spectacular than just a regular bump.”

So then the question is: what are some of the qualities of a great manager in 2011? Even though there is no definitive answer for this, it’s almost impossible to stop a manager from talking.

Daivari is a very special case, as he can just as easily wrestle, as he can manage. He had an opportunity to prove himself in 2005, when he was paired with Muhammad Hassan as a manager. But he also teamed with Hassan in what may be the biggest match of his career, against Shawn Michaels and Hulk Hogan.

“If you can wrestle, you can manage. The key is the ability to talk, which is just as important for a wrestler as it is for a manager,” Daivari said. “If you don’t have the ability to talk in this business, you’re not going to survive. It’s just like how a sales pitch can make the difference between a good salesman and a bad salesman; it’s the gift of gab.” 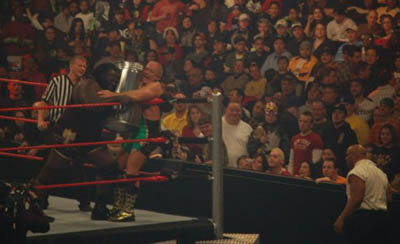 Looking through the history books, some may think of managers as the greatest personalities that ever existed. There are others who may disagree, and some may be on the fence. Whatever the case may be, perhaps a new generation of wrestling fans will be able to judge for themselves in the future.

“There was a time when westerns and gangster movies were big. But now everybody wants to see live superhero movies. Before, people only knew about superheroes in comic books. As times change, people get used to new things,” Atlas said. “Managers are something that fans want to see every once in a while. Today, the business is all about action, and once a book has already been read, it’s old. They haven’t found a new role for managers yet, and today, the managers are obsolete. But if anybody’s going to bring them back, I think Vince [McMahon] is the guy.”