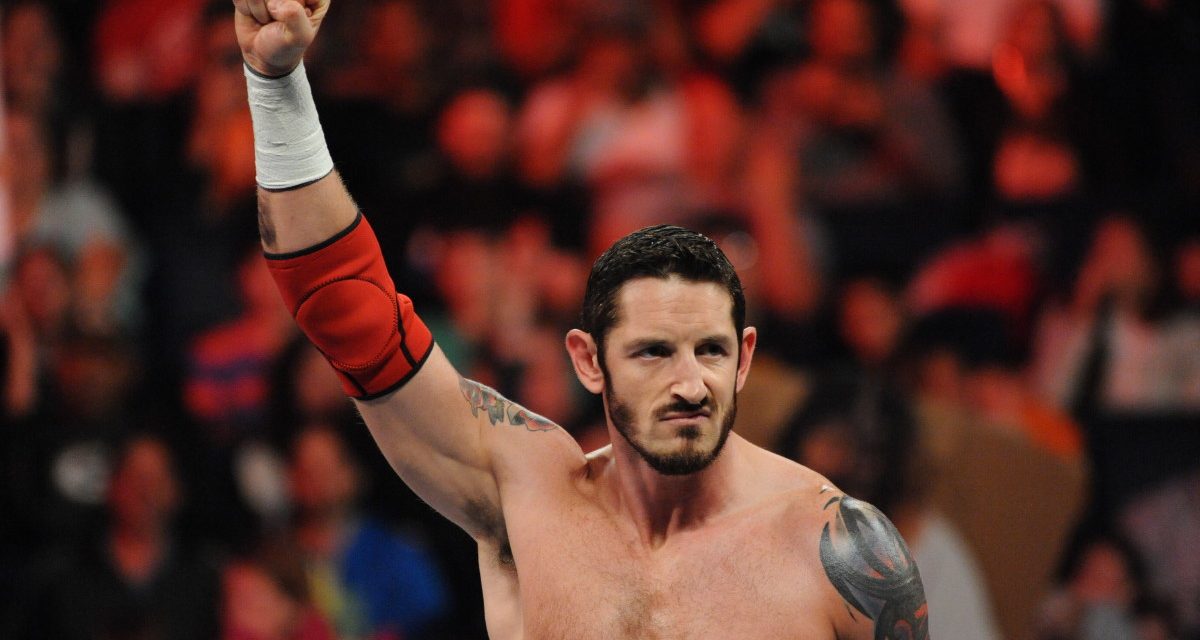 Wade Barrett thought he was through with teams, having led the Nexus in an uprising against the established WWE stars, and later helming The Corre on Smackdown. He’d sworn that the WWE faced a “Barrett Barrage” and his goal was singles glory.

“I was kind of done with teams for the time being, but Survivor Series is really a special occasion,” Barrett told SLAM! Wrestling on Thursday. “One of my career goals was to be a part of one of the traditional Survivor Series teams, so when this opportunity came up, I certainly wanted to take them up on it. 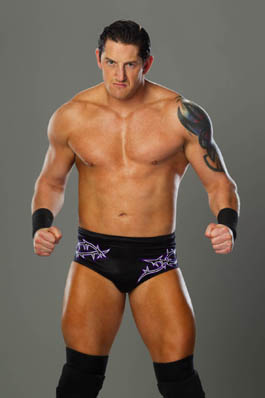 “When I was a kid, I was always a big fan of the five-on-five matches, or four-on-four, as they were for a while. It’s a big deal for me to be a part of it, and obviously to be the captain, with my experience and talents, I was the natural choice for the position.”

Is he just a natural leader? “I don’t know if I’m good at being the boss or if I’m just very bad at being someone else’s employee, or someone else’s junior. I’m very happy to be the top guy on the team anyway.”

A year ago, at Survivor Series in Miami, Barrett took on Randy Orton in the main event singles bout with John Cena as the special referee, when Barrett was still part of the Nexus unit, a result of the Barrett-led faction of NXT graduates getting into everyone’s business.

He understands that you can’t main event them all.

“I think WWE in general is very cyclical in its nature. Guys go from the top spots and then they have to sink a little bit low, to put other people up there so they have an opportunity too. I think the fans like to keep it fresh like that,” he said. “The people like the Cenas, the Undertakers, the Randy Ortons are always in those top-level positions. It’s constantly cycling around. I had my time at the top last year. This year, I’ve been a little bit lower down the card.”

On Smackdown — and on Raw supershows — Barrett has been battling Orton, Sheamus and Daniel Bryan in particular. “My aim in sort of the next 12 months is to be in the main event and hopefully capture a world heavyweight title,” he confessed.

Barrett hasn’t ruled out the tag titles either, as he and Cody Rhodes had a non-title win over the champs, Air Boom (Kofi Kingston and Evan Bourne). A wellness policy suspension for Bourne has postponed that issue, however.

“It’s certainly something we can go back to,” Barrett said. “I think myself and Cody gelled pretty well as a team in that match. Certainly in the future, if we get an opportunity to tag together and it could be for those titles against Air Boom, we’ll certainly take it. Cody, I think, has been a two-time tag team champion and is decently experienced in that area. I do want to be a tag team champion at some point in my career, whether it’s sooner or later, but primarily my focus at the moment is working towards a world heavyweight championship.”

The only belt he’s held in WWE is the Intercontinental title, from March to June of this year. 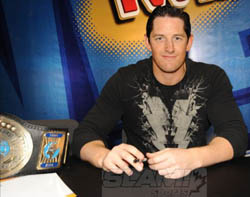 Barrett with the Intercontinental belt at Fan Axxess at WrestleMania 27. Photo by Mike Mastrandrea

“That was a huge moment for me, capturing that title,” he said of the win over Kingston. “I was really happy with the match, I was really pleased with the finishing sequence that we did where I caught him in his Trouble in Paradise move and hit my Wasteland move.”

For Barrett, it’s a direct link to his chosen wrestler growing up, “The British Bulldog” Davey Boy Smith. “Probably my favourite match of all-time was actually watching Davey Boy Smith win that match in Wembley Stadium against Bret ‘The Hitman’ Hart in the Intercontinental title match in SummerSlam ’92. It really felt good for me to have followed in his footsteps and captured that title too. It was a big deal.”

Having just returned from an 18-day tour of Europe, the Preston, England-born Barrett (Stuart Bennett), is a rare WWE superstar who enjoys the grind of the international tours and the sightseeing.

“We had a great time over in Europe. I always enjoy going on tour with WWE, whether it’s Europe, South America, or Japan, or wherever we end up going,” said Barrett, who got to go home.

“It was really good this time to see my family again for the first time in over a year. I got to sleep in my bedroom where I grew up for one night while we were in Cardiff. So, yeah, it was really cool. I love going back there. I think most of the crew really enjoyed it too. We did our first-ever show in Poland this year, which was very exciting.”

The show in Gdansk was a hit, and Barrett took the opportunity to see all that he could during the short stay.

“It’s always a battle for us when we get to one of these countries, and basically we get there, usually we’re exhausted. We get to the gym and work out, and then we have our show. Usually we travel immediately after,” he explained. “Very much that was the case in Poland; I think we had about two or three hours of downtime. When I got there, I quickly rushed to the gym, got out after the workout, had a quick look around the town, saw, really, how different it was to the rest of the world I’m used to in the UK. It was a very different place. … I took some pictures, and there we are, back at the hotel, ready to leave for the show and perform for the fans out there. I think you have to be very conscious of the fact that there’s not going to be too many occasions in my life where I get to go to a place like Poland. I really make the most of it when I am there.” 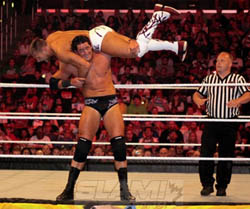 Daniel Bryan on top of Wade Barrett on the ring apron at WWE SummerSlam in August 2011. Photo by R.P. Strickland, [email protected]

At the shows in the United Kingdom, Barrett did get to see some old friends from the English indy circuit, and was pleased that a few of them got to strut their stuff for WWE staff.

“In Liverpool, filming Raw and Smackdown over there, we had a lot of the independent guys there, and WWE were taking a look at some of them. Fingers crossed we get a few of them signed and get them over to the States as soon as possible,” he said.

The international feel is definitely in WWE these days, he admitted, laughing that with the signing of Mason Ryan, WWE has covered off Ireland (Sheamus), Wales (Ryan), Scotland (Drew McIntyre) and England (Barrett).

“For a long time WWE was very much viewed as a North American company with mainly U.S. or Canadian performers, and now we’ve obviously got guys from Japan, from South Africa, from all across the UK and Ireland. I think that’s going to continue,” he said, adding the Latin influence, including WWE champ Alberto del Rio and Sin Cara.

“WWE is very much a global company, with a global brand, and we’re looking to expand it into as many markets as possible. The thing about our fans from across the world, they usually like to have a performer, a home performer, from their own country to support. When I was a kid, my favourite was the British Bulldog, primarily because he was from the UK, the same place as me; that’s why I loved him so much. Obviously, he was a great performer too, and I was a great fan of his, but I think most people do live to have their home country’s guy to support and watch, somebody they can really identify with.”

More obvious to less obsessive fans is the blend of the Raw and Smackdown rosters that has been happening as of late on TV and Sunday’s pay-per-view.

“It’s getting mixed up a lot more. We’re not so segregated in terms of Raw and a Smackdown team. I think it’s good,” the 31-year-old grappler concluded. “It allows us a lot more options as a company, your creative team has a lot more options. As performers, we get to mix with a lot of different characters. I think it’s probably quite refreshing for the fans to see that.”