Any tag team competitor will likely agree that two heads are better than one. And the current crop of tag team wrestlers certainly hope to live up to the standards of excellence, set by their predecessors, and prove that tag team wrestling isn’t a thing of the past. 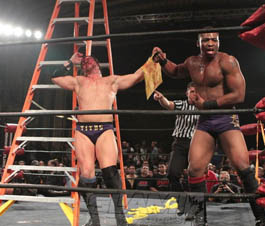 “I think probably what got me into wrestling was tag team wrestling,” said Ring of Honor’s Kenny King. “I think ROH has the best tag team division in wrestling right now. The teams in ROH aren’t just teams. We practice, live and travel together as well.”

Of course, when looking up and down the list of great tag team wrestlers, one man who may be at, or near the top of that list is former WWE Superstar Edge, who has worn tag team gold on 13 occasions, with six different partners; and he’s done it in this millennium alone. 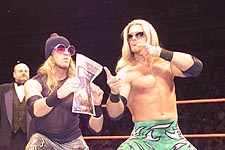 Christian and Edge in Toronto in 2001

“For a tag team to work, you have to realize that both of you are together; a willingness to realize that you’re part of a team, and you’re not trying to be a singles star,” Edge said. “It’s the same idea as being the Stanley Cup champions or Super Bowl champions. You have to have that mentality that you are teammates.”

Just when everyone thought that the WWE’s tag team division was starting to fade away, along came Air Boom (Evan Bourne & Kofi Kingston), made up of two popular singles stars, who were put together out of nowhere, but made it work (Bourne’s current Wellness Policy suspension notwithstanding). Edge can certainly relate to this, as the majority of his partners were also established singles stars. But he was able to prove that sometimes opposites attract. He even got to win the WWE tag team championships with his childhood hero, Hulk Hogan.

“It (winning the belts with Hogan) was one of those experiences that I never thought I would experience. So when it happened, it was surreal, amazing, and I remember what it felt like to be a fan,” Edge said. “It was another one of those highlights along with the Wrestlemania match with The Undertaker and Hell in a Cell.”

Edge’s success, as well as the success of other Canadian tag teams such as The Hart Foundation (Bret Hart and Jim Neidhart), may have inspired their fellow Canadians to bring tag team wrestling back to prominence. Perhaps one of those future tag team greats is Toronto-based independent wrestler Marcus Marquez, who is one half of The Empire.

“Just looking at some of the teams today, a lot of them don’t wear matching outfits, or even look like a team,” Marquez said. “For a tag team to work, you have to realize that it’s a team effort and you have to be dedicated to the team.”

Because it is so rare for any two people to enter the wrestling business together, it might be harder for some to get used to the idea of not only having a tag team partner, but also competing in a tag team match. For others, it eventually becomes a perfect fit. 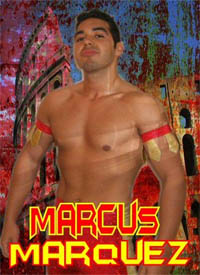 “There are so many things you could do in a tag match. It’s just more creative to have four people in the match, instead of two,” Marquez said. “In a tag match, you have to be aware of different things, so it takes some time to get used to. If you’re not the legal man, you have a count of five to get out of the ring, otherwise you get disqualified. Sometimes you forget about that. A lot of people think that having a million different tag team moves is great, but as long as you have a couple in your back pocket, it’s still good.”

Definitely one of the highlights of Ring of Honor is its tag team division, which is still growing by the numbers. King and his partner, Rhett Titus, make up the All Night Express. It was another team made up of two singles stars, with very different personalities, but it was their combined talents that made it work.

“Neither me nor Rhett were thrilled about having to team together at first. At the time, Rhett was still a student, and we just didn’t think we’d work as a team,” King said. “It definitely helps for teams to get along outside the ring, but as long as it doesn’t interfere with the in-ring quality, it isn’t necessary. Rhett and I really complement each other, but at the same time, we’re very different.”

One of the most important qualities of a great tag team is to have a great name. Otherwise, it might just seem like a temporary arrangement.

“I have to actually credit Austin Aries with the team name. We were tagging for a while, and then I went off to do a singles feud with Jerry Lynn. And then Aries said that all great teams have a name. So that’s when the All Night Express was born,” King said. “Then we took the idea to Jim Cornette and he looked at us and said ‘You guys are young guys and go to sleep way past midnight, so you can be the All Night Express.'”

As important as it is for a team to look alike, sometimes it helps for teammates to not be so similar, so when they eventually separate, they can be taken seriously as singles stars. One of the greatest examples in recent memory is a team known as the Super Smash Brothers, who are beginning to make a name for themselves in Ring of Honor. 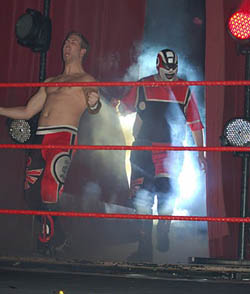 The Super Smash Brothers make their entrance at the final IWS show on October 9, 2010 in Montreal. Photo by Karen Broadway

“Most tag teams were used to make singles stars later on, and I understand why the promoters would do that. But there are some teams that are better off as a pair, rather than being singles wrestlers,” said the masked Smash Brother Player Uno, Nicolas Dansereau. “I find tag team wrestling very interesting. It’s one of those things that distinguishes pro wrestling from MMA or any other combat sport. You don’t have two versus two in any of those other sports.”

Dansereau certainly holds his tag team partner Player Dos in the highest regard. And it shows in their teamwork.

“It’s always good for a team to be in sync with everything they do. Sometimes there is conflict because we’re not agreeing on the same ideas, but sometimes it’s better to combine ideas, instead of just going with the same one,” Dansereau said. “Both myself and Player Dos wanted to be singles wrestlers, and neither one of us had ever tagged before. But we found that there’s just so much more you can do in a tag match.”

They say that all great things come in pairs, which is especially the case on the independent wrestling scene. And one team that perhaps stands apart from the rest, mainly due to their physical presence, are The Skull Krushers, who have been wreaking all kinds of havoc in the National Wrestling Alliance.

“We’re just a couple of burly-looking guys, both 6’3″ and above and one’s white, one’s black, so why not tag?” said Skull Krusher Keith Walker. “Out of the two of us, I’m more of the animal. I do a lot more barking in the ring. He’s (Skull Krusher Rasche Brown) more of the technician.” 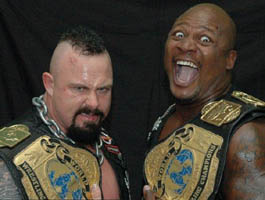 The Skull Krushers are the kind of team that could break up at any time and probably have successful singles careers, because they’re so different, both in terms of physical appearances and wrestling styles. But that has also brought them closer together.

“We used to beat the crap out of each other for about four or five years, so we never had a problem with teaming up, because it’s business,” Brown said. “We don’t try to copy anybody’s style. We’re ourselves and we just do our own thing.”

Although nobody can predict what the future holds for tag team wrestling, the young teams of today definitely hope to continue entertaining their fans.

“Tag team wrestling has become scarce lately. There aren’t a lot of teams today and most of the tag team wrestlers were actually fans of solo wrestlers growing up,” Marquez said. “We’re going into 2012 now and I hope the tag team division strengthens a little bit.”