TORONTO, ON – With Edge in his home digs for what he calls his “real” retirement, there are well-wishers, handshakes, autograph requests, and people that are thrilled to see the man in person. That’s not all about the nearly 15-year veteran Edge, though, as a groundswell of support forms around Jason Sensation in the crowd, he of barely 15 minutes of WWF fame. This night provides a story of two dreamers and two paths.

WWE doesn’t always play the most obvious card (to their credit), but tonight’s show opener is a no-brainer and they stick with it: Edge returns “home.” Toronto isn’t really home to Adam Copeland, but most people that live anywhere near Toronto will often list it as their hometown when on vacation, because it’s just easier than having to explain where Orangeville is, for example (about an hour’s drive northwest of Toronto.)

So, to the strains of Alter Bridge’s emphatic entrance song, out comes Edge to a predictable but nonetheless satisfying eruption of cheers. Edge is the poster-boy for WWE retirement right now. He has left the ring very near to the top of his abilities, without controversy (he has seemingly unshackled himself from the 2007 report that linked him to steroid and human growth hormone usage), and shows no outward evidence of the physical damages that he has incurred from his career and that have now forced him into his unwanted departure from wrestling. There is no need, it seems, for the WWE to sweep his legacy under the carpet. 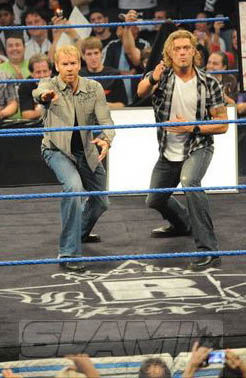 Plus, Edge truly has that “Aw, shucks” kind of aura as praise has been heaped upon him by the fans, reporters, announcers, and wrestlers since WrestleMania XVII — in what turned out to be his last match. There’s nothing self-gratifying or falsely modest in Edge’s genuine deflection of the tributes in his name, and from the moment that Trish Stratus enters the ring to host Edge Appreciation Night following the conclusion of the SmackDown taping, the tributes come pouring in.

Edge has said on several occasion how much he misses the entrance, the fans, and the rush of even just standing in the ring. It’s the same thing that countless wrestlers speak of, and it’s a feeling that seems to only get stronger as the years go by, never fading. It’s the same feeling that Jason Sensation (Jason Tavares), seated close by at the Smackdown taping, has been living on and seeking since he appeared on Monday Night Raw in 1998, doing his spot-on impersonations of Shawn Michaels, Steve Austin, and especially Owen Hart.

Since those memorable appearances in the Attitude Era, Sensation admits he’s clinging to an unrelenting dream: “that someday the WWE will bring me back,” he says, now wistfully. “There is nothing in the world like feeling the love in the middle of the ring.” More than a decade later, though, Sensation recently posted a YouTube video announcing his retirement from wrestling, essentially giving in to what he deems the undeniable: that “the wrestling business does not want Jason Sensation.”

Of course, if the WWE called Sensation tomorrow, would he turn them down? What wrestler out there would ever turn down a return to the spotlight in any capacity? More often than not, businesses of all manner, not just wrestling, give up on the workers before the workers give up on the business. In light of that, Sensation has no problem getting his fix for performance by playing the role of heckler supreme at the show. Of course, not every heckler has dozens of people ask to shake hands or get an autograph.

With both Edge and Sensation breaking ground on their WWE careers at roughly the same time, their journeys couldn’t have been more different. Both are self-described superfans, vowing to themselves that there was no other choice but to have a career in wrestling. Granted, they are different performers offering different talents, but what has one standing in the ring, soaking in the adulation following a stellar career, while the other is silenced for the first time all night as he watches from the sidelines? Edge looks uncomfortable being the focus of the evening, but Sensation looks decidedly dejected.

Stratus unveils two poster-sized photos of Edge: one as he readies his spear on John Cena at New Year’s Revolution in 2006, soon to capture his first World Championship; and the other as he makes his entrance at this year’s Wrestlemania. Christian comes out next (insisting on calling his friend Adam for the duration of the ceremony), introducing a video compilation with Edge’s fellow wrestlers sharing their remarks.

The video is the type of excellent work that has become a given trademark of the WWE production team, but unfortunately the sentiments of Cena, CM Punk, The Miz, Vickie Guerrero, Randy Orton, Jim Ross, and Alberto Del Rio are only half-heard as the crowd is more interested in cheering or booing the image of the speaker. Hopefully it actually airs on Raw or Smackdown, but it will almost certainly be replayed on DVD or online.

Edge is already looking a little choked up when Christian brings out the big guns. Here to help Edge walk off into the sunset in style is his mother, his trainer Ron Hutchison, friend Rob Etcheverria, and an old partner in crime: Rhyno. The crew assembles in the ring as Edge thanks them in as few mumbling words as possible.

But wait, there’s more! Bret Hart and Sweet Daddy Siki are next. Siki was part of the famous Toronto Star essay contest that Edge won as a teenager, getting a spot in Hutchison and Siki’s training school. For his part, Hart recalls not having much to teach Edge back at the Hart House, then joking that he can’t even come close to Edge’s championship title haul over his career. He applauds Edge as the best there is, was, and will be — and, in this moment, it doesn’t sound phony or forced. 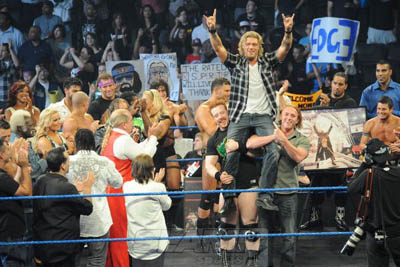 Edge is paraded around the ring. Photo by Mike Mastrandrea

It all comes to a head as the Smackdown roster spills onto the ramp and into the ring, with Michael Hayes arriving last to an appreciative cheer. Edge thanks him especially, letting Hayes know that he has been a father figure to him. As the night is wrapping up, Heath Slater lets Edge know that he and Sheamus are about to hoist him up, to which Edge visibly replies “Oh no”; but his protests aren’t acknowledged and he’s paraded around the ring.

Whether he really wanted to be a part of an Edge Appreciation Night or not, Copeland was the focus of attention for one simple reason, as Christian pointed out to him: he has earned it. It’s a presumption, but a fair one, that Jason Sensation had similar dreams about his own retirement, that he would be someday looking back on a career that would have had him be, as he says, “the next Mean Gene.” Both Edge and Sensation now find themselves looking to the future and, to some degree at least, forced to re-invent themselves. On this night, though, both seem to be feeling the weight of inevitability, as Sensation remarks that “no career lasts forever.” Whether he is referring to himself or to Edge doesn’t really matter.

One more impression of Randy Savage for passing fans, and Sensation’s night is done. One more Five Second Pose with Edge and Christian (stretched to a lengthy 60 seconds), and the fans soak in their last exposure to awesomeness … until the Hall of Fame comes calling.

Two roads diverged in a yellow wood, with Edge and Sensation taking as wildly different paths as possible in their careers. And when they are both telling their stories with a sigh, somewhere ages and ages hence, those sighs probably won’t be more different from one another either.