Already a Wrestlemania city and a cornerstone of the professional wrestling world during the last half-century, Atlanta, GA, will one again become a wrestling hotbed when the NWA Legends Fanfest rolls into town Thursday, August 3, to Sunday, August 7. The much-anticipated convention is set to take place at the Atlanta Airport Marriott Hotel.

Considered by many to be the premier wrestling fan convention since its first installment in 2004, the NWA Fanfest traditionally spotlights quintessential stars and notable matches associated with each year’s host city. Last year, convention chairman Greg Price built his event around the importance of Charlotte, NC, and the many epic battles that took place there — in particular the first Starrcade and its championship main event between Harley Race and Ric Flair. 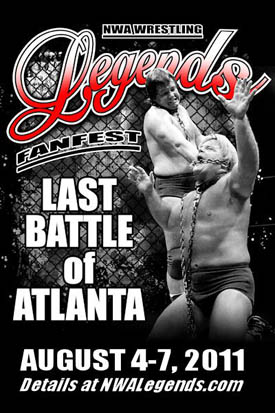 “If you lived in Atlanta during that era, you were fortunate enough to see these guys — Mr. Wrestling II, Tony Atlas, Bobby Heenan — every week on TV,” said Price. “People in other areas knew that Atlanta had wrestling, but I don’t think a lot of them realized how important Atlanta was to the whole scheme of the NWA. It was a very successful territory for so many years.”

Last year, quintessential NWA champs Flair and Race “came home” to Charlotte. This year, says Price, Piper will be coming home to Georgia, where the former Portland, OR. brawler cultivated his unpredictably electric Hot Rod persona in the early 1980s before becoming nationally known in the WWF. “There’s going to be so many guys there that we don’t want to overshadow, but a lot of the weekend is built around Piper coming back to Atlanta. He’s going to be heavily involved with a lot of things,” Price says.

A highlight of any NWA Fanfest weekend, this year’s Hall of Heroes induction ceremony will be chock-full of essential Georgia heels and ‘faces who also made contributions to other NWA territories. Both original, masked Assassins (Jody Hamilton and Tom Renesto) are scheduled to be inducted, along with the Masked Superstar, “Hands Of Stone” Ronnie Garvin, the late Sir Oliver Humperdink, “Crippler” Ray Stevens and even former WCW owner Ted Turner. “Some people asked me why we selected Ted Turner,” says Price, “but Turner has done a lot for wrestling in Atlanta. You have to think about the opportunity he provided for it there. Wrestling on TBS was the top show in the local market there for years. He’s somebody I have a lot of respect for. Each one of the (honorees) this year has a connection with wrestling in Georgia.”

The “Dean of Wrestling Announcers” Gordon Solie — a man who put Georgia wrestling on the map with his voice, rather than his body or mat skills — will also be lionized in the NWA Fanfest Hall of Heroes. Price says that Solie will be inducted by none other than his former Georgia Championship Wrestling co-host “The Rowdy One” Friday night, August 5, at the Class of 2011 ceremony. The program will be hosted by former Atlanta resident and Four Horsemen mastermind James J. Dillon.

“That was a special time, when Gordon Solie hosted wrestling in Georgia. It’s like when you grew up watching something like “The Little Rascals’ or ‘Gilligan’s Island,” Price says. “Those are things you remember from your childhood that are bigger than life. Gordon Solie was bigger than life to a lot of people. Piper inducting him will definitely be special.”

Several of the 2011 Fanfest’s guest stars will be appearing for the first time this year, says Price. As an additional nod to the history of wrestling in Atlanta, the entire weekend will be hosted by Joe Pedicino and Boni Blackstone — the comical husband and wife team who brought the nation’s wrestling territories to Georgia fans from 1986 to 1991 as hosts of the eight-hour program “Superstars of Wrestling.”

“I think I’m about as exited as anybody to be having Joe and Boni appearing,” says Price. This will be the first wrestling related appearance made by Blackstone and Pedicino in quite some time, Price adds. “In fact, it will be the first time we’ve heard from several of these people in years,” he continues. “One of them that comes to mind is Lars Anderson, who has never made a wrestling convention appearance before. Others who will be with us for the first time include Killer Karl Kox and Killer Tim Brooks, as well as Felecia Valiant, who appeared as Big Mama alongside Jimmy Valiant in the NWA. Another one is Dr. D David Schultz, who, a lot of people don’t realize, basically sacrificed his whole career when he slapped (20/20 reporter) John Stossell for calling wrestling ‘fake.’ So, this convention will also be special for Mid-Atlantic fans and other NWA territories, not just those who grew up on wrestling in Georgia.”

The real Hot Rod will be unleashed Saturday night, August 6, when Piper hosts a special presentation of his appropriately titled stand-up comedy act called “All My Rowdy Friends.” “He will be doing a special version of his stand-up routine that will also feature some special guests from his wrestling days,” Price said.

An additional card of NWA wrestling will take place Saturday night, as well, at the VFW fairgrounds in the nearby city of Carrollton. The fairground saw many Georgia Championship Wrestling cards held there during the promotion’s heyday. Price says that, for a small fee, Fanfest attendees can hop aboard shuttle buses that will transport them to and from the matches. “We usually have two nights of wrestling but, this time, it will just be one. The closest venue we could get was in Carrollton, but we will have transportation for people to take them from the matches back to the hotel,” he said. “We will be featuring some of the young, rising NWA talent including Colt Cabana, Adam Pearce, Gunner, from TNA, and Craig Classic, who will be going against (Alabama and Georgia territory veteran) Mike Jackson.” 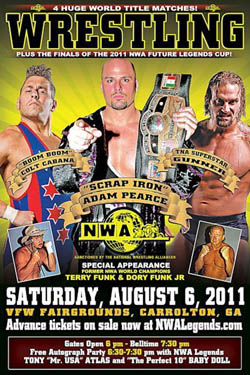 The NWA title has been a point of (kayfabed) controversy as of late following the modern day indie alliance’s decision to strip title-holder The Sheik of his championship after he pulled out of a scheduled July 31 title defense against former champ Adam Pierce. The outcome of the Carrollton card could end up being a deciding factor in how the championship dilemma progresses. “We will still have an NWA World Title match,” said Price, adding that former NWA world champs Terry and Dory Funk Jr. will also be participating in the wrestling card.

Although other wrestling conventions have begun holding annual events similar to his since Price staged the first NWA Legends Fanfest seven years ago, the convention head stands behind his event as an interactive wrestling fan experience “like no other.” Fanfest VIP All Access passes are still available for $159, which covers all convention events, two tee shirts and an two items autographed by each featured legend, while attendees can also select a limited access individual day pass for $20.

“It’s like heaven for wrestling fans,” said Price. “We try to offer something for everybody over three nights and four days, including up-close autograph and Q&A sessions and photo opportunities, as well as a room full of vendors selling everything wrestling related you could imagine. I don’t think there’s anything like it that compares.”