Linda Hogan’s book has sex, drugs and lots of advice

Before I even started Linda Hogan’s Wrestling The Hulk: My Life Against The Ropes, I made a note that I was hesitant to jump in, knowing that it was going to get dirty. And it did. After reading the autobiography, you will know more than you ever wanted to know about Hulk Hogan’s sex life — and Linda’s.

It wasn’t so bad that I needed to put the book down and go wash, but there were moments where I shuddered. 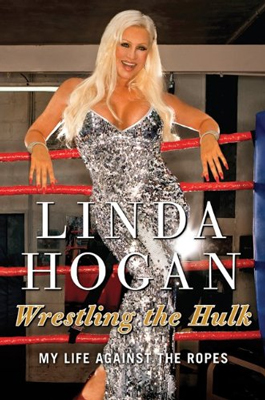 Still, I will say that Wrestling The Hulk is far better than it has any right to be, especially given that it is as much a self-help/amateur shrink book to help with signs of infidelity as it is a recounting of Linda’s life. (And there are recipes too!)

It’s refreshing to hear from the spouse of a pro wrestler; Barbara Goodish, Bruiser Brody’s widow, probably had the best previous book from that perspective, with Martha Hart and Diana Hart a step or two down.

As a wrestling fan, writing for a wrestling site, the book falls short, however. For example, just as she is revealing some interesting tidbits about behind the scenes at the first WrestleMania, the narrative jumps two years later to the massive third Mania at the Pontiac Silverdome. I wish she’d written another couple of pages about their wedding alone, and the wrestling elite that were there and ran up a ridiculously huge bar bill.

Aside from Brutus Beefcake, we don’t get any insight into any of Hogan’s regular cronies — imagine, Hulk Hogan without Jimmy Hart, Eric Bischoff or the Nasty Boys.

I tried not to take offense to the slights. Apparently, before Vince McMahon came along with his expanding World Wrestling Federation, wrestling had just been in “small, dingy, dimly lit no-name arenas with fifty to one hundred people in the audience.” (Bruno Sammartino, with your many sellouts of that “no-name” Madison Square Garden, we have a new foe for you!)

But Linda’s insight into the actual growth of the WWF was quite interesting, hearing how Hulk and Vince plotted out things together, as peers rather than employee and boss.

Likewise, she describes how the Hogan heel turn in WCW affected her husband.

On a few occasions, she addresses the drugs, like cocaine, steroids and pain pills, that make up the wrestling life, but she isn’t judgmental and just sort of mentions them.

It’s a fine line she is forced to walk, and I recognize that.On one hand, she is famous only through her marriage to Terry Bollea, a.k.a. Hulk Hogan, and their subsequent VH1 TV show, Hogan Knows Best. Detailing how they met, how their marriage worked — and eventually didn’t — and their two children is pretty straightforward stuff, and it won’t shake anyone’s world.

There was a decent look into the TV show, how it came about, was shot and changed their lives. If you are hunting for details on Brooke Hogan’s singing career and the Nick Hogan accident where he crippled his best friend, though, I’d suggest getting Hulk Hogan: My Life Outside the Ring instead.

But a big part of Linda’s writing comes off as defensive.

“I was not the gold-digging type,” she writes early in the book, despite what barbs her ex-husband flung in the media during divorce proceedings.

“I was more than a wife; I was a mom, friend, adviser, housekeeper, party planner, sex goddess, chief cook, and bottle washer,” she lists later.

Her central theme is that Hulk Hogan was a narcissist and a philanderer, which shouldn’t come as a surprise to anyone familiar with the sports or entertainment world.

So Wrestling The Hulk: My Life Against The Ropes won’t change the world, but it does offer a decent counterbalance to the Hulk-heavy world we live in.