Since his stinging loss to George W. Bush in 2000, former Vice President Al Gore has rebooted himself as an environmental advocate, speaking out on issues of climate change. The former Vice President won an Academy Award in 2007 for his documentary, An Inconvenient Truth, largely centered around lectures he had given on climate change problems. But the man who was just a heartbeat away from the U.S. Presidency revealed something new in June 2011: his fascination with professional wrestling. 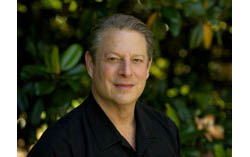 The one constant criticism of Gore, be it as Vice President, then as the Democratic Presidential Nominee, and finally as an environmental advocate, has been his “wooden” persona. For some, Gore seemed too cold and intellectual to connect to the masses. Perhaps this has all changed with his new Rolling Stone article entitled “Climate of Change.”

Describing his disagreements with how the media has been reporting about climate change, he has turned to the metaphor of professional wrestling to help piledrive his point home.

Unlike other politicians who sometimes use pro wrestling in a negative context, as Hillary Clinton did in a recent speech slamming wrestling [U.S. Secretary of State Clinton slams pro wrestling for being anti-American], Gore reveals with heartfelt passion the awe and wonder he felt at watching pro wrestling live as as child in Elmswood, Tennessee.

No doubt, he would have seen regional stars such as Lester, Herb and Roy Welch, Buddy Fuller, Mario Galento, and national icons like Lou Thesz and Gorgeous George, promoted out of Nick Gulas’ Nashville office.

The Rolling Stone article is as much about pro wrestling as it is about climate change. Arguably, Gore’s recollections about pro wrestling are among his greatest achievements as a writer. The former Nobel Peace Prize winner remembers, as child, struggling with the question which all wrestling fans have faced as children: when they ask themselves “Is it real?” As a child, he wanted to believe that it was real.

For the former Vice President, it wasn’t the blood or the numerous steel chair shots he saw and describes with such vividness in his piece, that made him think that wrestling might be “real.”

As Gore puts it, “The answer to the question ‘Is it real?’ seemed connected to the question of whether the referee was somehow confused about his role: Was he too an entertainer?” This is a fascinating take on pro wrestling storytelling.

Gore puts the spotlight on the long-neglected, vastly underpaid third person in the ring as the one who makes the match seem more “real.” Even if one does not subscribe to his take on climate change, wrestling fans everywhere should take to heart his elevation of the importance of the referee’s role in the ring. Gore argues that the more quiet and unbiased the referee is in the match, the more real the match seems (one could extrapolate that he would not like the “special guest referee” concept in pro wrestling matches).

After delineating the differences between an effective pro wrestling referee, and an ineffective one, Gore compares the ineffective referee to the mainstream news media: “The referee — in this analogy, the news media — seems confused about whether he is in the news business or the entertainment business. Is he responsible for ensuring a fair match? Or is he part of the show, selling tickets and building the audience? The referee certainly seems distracted: by Donald Trump, Charlie Sheen, the latest reality show — the list of serial obsessions is too long to enumerate here.”

From there, Gore briefly mentions the concept of a tag team match between “Science and Reason” versus “Poisonous Polluters and Right-Wing Idealogues,” but doesn’t give any fascinating analysis about tag team wrestling, alas (maybe Gore has it in him to write a future piece about being turned upon by his former political tag team partner, Connecticut Senator Joe Lieberman, comparing it to great tag team turns in the past).

And when it comes time to cite a poet, he doesn’t cite The Genius, but instead opts for W.B. Yeats. At this point, his article loses its pop culture relevance, and he becomes the dry Al Gore of old.

Overall, though, Gore’s article on the environment is far more accessible than his past writing on climate change since he puts pro wrestling metaphors at the forefront, and with such strong personal memories of it.

A more fascinating analysis of the pro wrestling referee’s role can not be found, at least not written by such a high profile figure like the former Vice President.

Great referees like Jim Korderas, Charlie Smith, Jim Molineaux, Dick Kroll, Rudy Charles, Charles Robinson, Red Shoes Dugan, and many others who have worn the striped shirt should take solace in the fact that they are not taken for granted.

President Barack Obama once joked about being from the Planet Krypton and that his father’s name was Jor-El, bringing a smile to the faces of DC Comics fans everywhere. Will it be long before a future U.S. President starts referring to pro wrestling characters in his or her speeches?