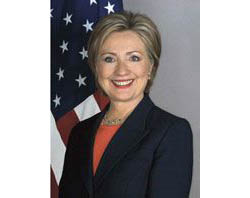 “I remember having an Afghan general tell me that the only thing he thought about Americans is that all the men wrestled and the women walked around in bikinis because the only TV he ever saw was Baywatch and World Wide Wrestling,” she lectured with a stern face to the sitting members of the U.S. Foreign Policy Priorities Committee.

Clinton further blamed TV shows like U.S. professional wrestling for being at “counter purposes to what we truly are as Americans,” leading to “Al Jazeera winning.” The former First Lady used the bogeyman of professional wrestling while defending the U.S. State Department’s budget, while asking for more money to win an “information war” that America was “losing.”