Ask many young wrestlers, and they’ll tell you that their dream is to win the WWE Championship or to main event WrestleMania. Not “Bulldozer” Matt Tremont, though. For him, his dream would be to walk out as the winner of this weekend’s CZW Tournament of Death.

“To me,” the first-time ToD participant told SLAM! Wrestling, “winning the tournament would be like my WrestleMania. As a fan, I’ve been to three of the ToD shows, and there’s nothing like it. To actually have the experience of going out there and beating the hell out of (the other participants), you bet I’m looking forward to it.” 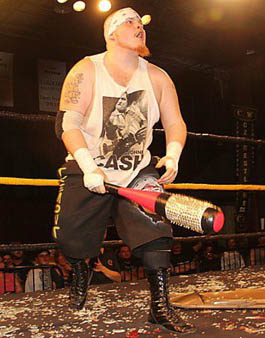 The Tournament, which is being held at the Ultraviolent Underground in Townsend, Delaware this Saturday, is the tenth edition of the signature CZW event. In addition to Tremont, other participants include Big Japan Pro Wrestling stars Masashi Takeda, “Black Angel” Jaki Numazawa and MASADA, Dysfunction, and former winners Danny Havoc, Scotty Vortekz, and Tremont’s first round opponent, the Necro Butcher.

“We’re going to be in a ‘Get Hit’ match,” he said excitedly, “which means there will be water jugs and bats and anything you can swing at your opponent. There’s going to be a lot of brain damage going on. I’m definitely looking forward to it.”

Though Tremont acknowledges that most people wouldn’t be so eager to participate in that kind of violent encounter, he truly loves the ultra-violent direction that his career path has taken him down. It’s a journey that started 12 years ago, when he was only nine years old.

“I was watching mainstream stuff mostly, WWE. Then, when I was 13, I got a VHS tape of the original death match tournament from IWA Japan. And then I was hooked on to the hardcore genre of the sport.”

What got him looking into actually becoming a pro was when he learned about the independent wrestling scene. Watching CZW’s weekly TV show prompted him to move from the backyard, where he and his friends would duplicate some of the death match action that they saw on tapes, into a wrestling school.

“About a year and a half ago, I was tired of doing the backyard stuff, and decided to learn how to do things the right way. So I went to the DWF Devastation University in New Jersey. I made my debut on September 25 last year in a six-man tag match.”

While he started off doing standard singles matches, his interest in hardcore never waned, so he would seek out opportunities to get booked into those matches whenever he could. Ultimately, he was noticed by CZW, and started on their main roster a few months ago.

“In February, I was wrestling for an independent company called NWA Vintage Pro,” he said. “I had a barbed wire weapons match with former CZW mainstay wrestler WHACKS. The right people were watching, I made the most of the opportunity, and that led me to being booked in the Carnage Cup Deathmatch Tournament for IWA-Deep South. In first round, I went toe to toe with CZW’s Danny Havoc. I impressed the officials, impressed him, one thing led to another, and I was brought into Combat Zone Wrestling.”

Since debuting with CZW, Tremont has earned a reputation as a hard worker who is willing to do whatever it takes to succeed.

“I think Matt has got some great things in store for him,” predicted CZW owner DJ Hyde. “Not everyone may know his name now, but I think that’s going to change after (this weekend). He’s got what it takes.”

Tremont is grateful for the kind words, and will do whatever he can to live up to the expectations. The term ‘whatever he can’ may seem like hyperbole, but he’s prepared to back it up with actions, no matter what they may be. Despite the inherent dangers associated with ultra-violent wrestling, Tremont doesn’t let that faze him.

“It’s definitely a dangerous aspect of the sport. I mean, light tubes are light tubes… barbed wire, it’ll cut you. But I have such a love and passion for it, that when it’s game time, mentally, the fear goes out the window. I don’t think about getting hurt. Whatever’s going to get a good payoff, helps the story, is for the betterment of the company, and is entertaining for the fans. I’m always willing to go that extra mile.”

And if that extra mile is soaked with blood, well, so be it.

“(Death Match wrestling) is a genre of the sport that not everybody’s into, but it’s a genre that’s been around for a long time for a reason. Sure, there are people out there that say it’s ‘garbage wrestling’ and use terms like that, but it’s more than just going in there and smashing each other with weapons.”

“There’s a lot of guys that can work and can incorporate the weapons effectively,” he continued. “You can still tell a story in death matches. If it’s done the right way, death match wrestling is one of the best art forms in the world.”

“Bloodthirsty” Bob Kapur is heading down to Delaware this weekend to see the CZW Tournament of Death. If he makes it home in one piece, he will check for your messages at bobkapur@hotmail.com.