A shark who dresses and acts like “Stone Cold” Steve Austin, not your usual mix of a wrestling gimmick, but for Dean “Shark Boy” Roll that’s exactly where his career has taken him after TNA founder Jeff Jarrett heard him do an impression of the Texas Rattlesnake; from then on there was no looking back for Roll, and Stone Cold Shark Boy was born.

It was a gimmick that took Roll from being a mute character who wasn’t doing much apart from a couple of appearances here and there to the clam juice guzzling, trash talking Shark Boy that Roll and the fans themselves loved, but after a few months of entertaining segments and a short stint with Super Eric and Curry Man as the Prince Justice Brotherhood, Shark Boy again found himself left on the sidelines.

After many years of a stop/start career at TNA Wrestling, Roll decided earlier this year that he should move on to pastures new rather than sit around and wait for yet another call up to the main roster in TNA. 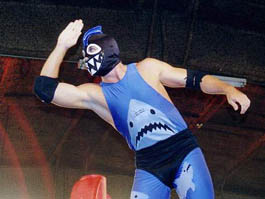 “After sitting around for a while not doing much, I started back with the company at the Lockdown event last year and although they didn’t have a lot for me to do the last couple of years I showed up. It was great that they asked me back but because they hadn’t used me that much over the years anyway I kind of always realized the writing was on the wall and I didn’t have much future there,” Roll told SLAM! Wrestling.

“I became interested in seeing what else was out there and where else I could go. It seemed like the time was right for me to leave.

“I had a conversation a couple of weeks before my release with Terry Taylor, head of talent relations. The discussion basically revolved around my feelings that the company had nothing for me right now, I hadn’t done a lot lately and they admitted they didn’t have much in the works for me.

“The split was very much amicable, it was friendly and I’m sure the door will be open for me if they ever needed me to come back.”

Roll left the company on March 3, 2011, and while he thought the Stone Cold Shark Boy character could have been used more often and to better effect, he is in no way regretful for his time with TNA.

“There were definitely points when my time with them [TNA] was disappointing, I wouldn’t describe it overall as disappointing though, I mean I was on TV, in a video game, my character sold a lot of merchandise and I had an action figure so those points were great. Do I think there were times when they dropped the ball with me? Yes, definitely. They could have given me more to do; I wish they gave me a chance to perform more often.

“I think there were times when they were behind me, pretty strongly. There were some great things we did with my character, but the reality is they only have so much TV time every week so obviously a character like mine is sometimes put on the back burner a little bit.”

Wrestling under a mask can be hard for any performer, as connecting with an audience and being able to relate with them is somewhat restricted so adding the Stone Cold dynamic to the Shark Boy character definitely helped Roll and his gimmick become more popular. By the same token however, Roll also believes that it alienated him with some of the audience in TNA. 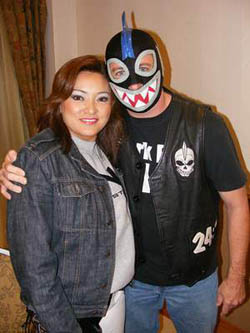 Ayako Hamada and Shark Boy at a fan fest in April 2010. Photo by Michael Coons

“There was a part of them that didn’t like what I was doing and it’s probably the first time something I had done in wrestling provoked a negative reaction with some fans. On the flip side it really did help me connect more, and a lot of fans realized that the only reason I do the Stone Cold stuff is because I truly think he is one of the greatest performers ever.

“I have always admired him and his work, so doing impressions of him was never meant to be a disrespectful thing. I looked up to Steve Austin so much when I first started wrestling and the coolest thing ever would be Stone Cold Shark Boy and Stone Cold Steve Austin standing in the same ring.”

With WWE showcasing masked characters like Sin Cara and Rey Mysterio alongside a midget leprechaun like Hornswoggle, there are those that believe the Shark Boy character could fit in well with Vince McMahon’s more family orientated company. Roll, who has done try-out matches for WWE in the past, agrees with this and believes he would fit better in the Stamford, CT-based promotion rather than TNA Wrestling.

“With WWE focusing more on storytelling I feel that I could fit very well. It’s funny because WWE’s product during the early 2000s was so over the top and very adult that Shark Boy would have never fit in, but I did in TNA during their early years. They were a bit more toned down back then compared to what WWE were doing at the time. Now it seems the tables have been reversed, TNA are now trying to push the envelope and WWE is the more toned down product. Obviously like any wrestler to work for them would be a dream.

“With hit animation movies coming out I absolutely think I could fit in WWE. Although Shark Boy will probably never become World Heavyweight champion, in TNA we sold a lot of Shark Boy merchandise. I think Shark Boy is a character that the kids want to come and see and I believe the Shark Boy character is very marketable.”