Ohhhh what a hall of fame rush

AMSTERDAM, NY – These days. a tag team is rarely put in the main spot. But Saturday night, at the 2011 induction ceremony for the Pro Wrestling Hall of Fame, it was a real rush to see the Road Warriors, with manager Paul Ellering, on the top of the card. Road Warrior Animal (Joe Laurinaitis) and Ellering, in attendance at the 10th induction ceremony, were gracious during their acceptance speech, paying tribute as well to their late colleague, Road Warrior Hawk (Michael Hegstrand). 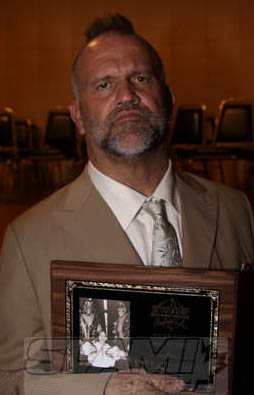 Road Warrior Animal after his induction into the Pro Wrestling Hall of Fame in Amsterdam, NY. Photo by Larry Minervini

“We stand here humbled and proud to be here with you guys. We got a paycheque, but the bottom line was we went into the ring every night and we worked for pride. Our pride was our signature. The Road Warriors came along when the business was changing. Cable was starting across the country and it was an industry in growth.” said Ellering.

Former AWA World champion Nick Bockwinkel was called upon to introduce the Legion of Doom, and he explained how the business changed as their rose to become superstars.

Bockwinkel said The Road Warriors were leaders of the bodybuilders turned wrestlers faction, pushing others to the side along the way. But along the way, “they made me open my eyes” to their skills, bringing another dimension to the sport and changing the landscape. He admitted he was initially negative about the Roadies. “They adapted to us faster than we adapted to them,” he admitted.

Road Warrior Animal flashed his new PWHF induction ring to the crowd and then turned to Bockwinkel.

“You never, ever have to apologize to Hawk and I, or Paul,” said Animal. “We apologized about a thousand times for the potatoes we gave Nick. Nick was a consummate champion, I want to make that loud and clear. He was probably the best world champion I ever had the chance to get into the ring with.”

He then launched into an analogy of how pro wrestling can be a lot like growing up.

“As young men full of a lot of piss and vinegar in the business that we all learn at the beginning — maybe Hawk and I were full of a little more for some odd reason. Paul taught us a real lesson right from the very beginning. This business is like infancy, it’s like childhood, growing up. First when you come into the business, you’re an infant. A clear example of that is when Hawk and I got called up by Ole Anderson to come down and join Georgia Championship Wrestling and Gordon Solie. We’re trying to keep cool, but we’re excited — ‘We’re going to Georgia Championship Wrestling, man!’ We were fans, we were consummate fans of wrestling,” Animal said, doing an Ivan Koloff impression to crack up the crowd and the Russian Bear seated near the stage.

“Then there’s a different stage. First you’re a kid, and you don’t know what’s going on. Then you learn to crawl a little bit. Then you think you’re getting ready to run, but you’re grabbed on the back of the tights by Stan Hansen, and he says, ‘Listen, we can’t take your lockups anymore. Come here!’ For him to tell us how to lock up, now that’s something. That guy was stiff. Everybody who knows that cowboy knows that Stan Hansen is three-quarters all the way blind. When he gives you a lariat, it hurts. Then comes the walking stages of the wrestling business. Then when we earned — and I say this humbly — when we earned the respect of the promotion and the boys, we got the chance to hold some titles. We actually took some pride in those. Belts are a work, we all know that, but if it’s putting money in our brothers’ pockets, just as a fraternity, we were just proud to do that for everybody’s sake. It wasn’t just about us, it was about everybody, and I just want to make that loud and clear.”

After a short, moving tribute to his partner, Hawk, who died in 2003, Animal offered his appreciation to those who made his career possible.

“We always appreciated the guys, the boys, the guys we were in the ring with. The guys that are in the room today, the guys that aren’t with us, that pounded the pavement, sometimes when it was fifty bucks and a six-pack of beer for your payoff. You gave us the opportunity to get into this business and succeed by the fruit of our labour. We cannot express our thanks and gratitude enough,” he said. 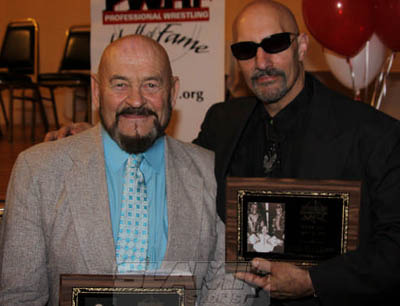 Ellering concluded the evening, where other honorees in attendance included Koloff and Billy Robinson, with a poem.

“Wrestling legends never die
They just fade away
They fade away in memories
Where they are forever young.”

The rest of the evening’s ceremonies moved quickly and smoothly at the banquet facility at the Best Value Inn in downtown Amsterdam, NY.

The Destroyer (Dick Beyer) talked about the fun he had with honouree Dick The Bruiser over the years, from 1955 up until his death in 1991, including the first time he had a V8 and beer for breakfast.

Doink the Clown (Ray Apollo) told some stories about Jerry “The King” Lawler, who he once faced on a WWF PPV, teaming with six midget wrestlers. Lawler was “a guy who is a real pro,” said Apollo.

Joyce Grable was asked to induct women’s honoree Judy Grable, whom she only met once and was not related to. 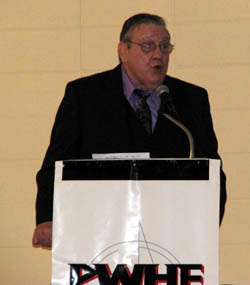 Paul “The Butcher” Vachon recalled International honoree Billy Robinson in India, where the famed shooter from Manchester, England, came in and “beat the hell out of them one by one.” Robinson cracked up the house immediately by teasing that, “most of you don’t speak English like me anyway.” He insisted that the award was about more than himself, and that “I’m accepting this for all the great wrestlers of all-time.”

The penultimate award was for Ivan Koloff, and was introduced by Danny Hodge. Like Robinson, Koloff wasn’t on stage very long, praising the PWHF as being the “legitimate” hall of fame, “the one and only.”

“I never considered myself a great wrestler,” said Koloff, after telling stories about being a big farm boy in Ontario’s Ottawa Valley.

“A lot of guys will testify to this fact, pro wrestling takes us all down different roads, and some of us on the same road. For myself, I talk about the alcohol and the drugs that took me down to the gutter of life,” said Koloff, who famously dethroned Bruno Sammartino for the WWWF World title in 1971. “Can you imagine wrestling your hero? In Madison Square Garden to a sellout crowd? And to find out after the 1-2-3 that the referee won’t raise your hand or hand you the belt?”