From wedded bliss to tearful goodbyes at CAC

LAS VEGAS – There was Jake “The Snake” Roberts having his butt playfully grabbed by midget wrestling star Darling Dagmar one moment, and then tearing up at his father’s photo on the memorial board minutes later.

Such is the dual nature of the first day of the Cauliflower Alley Club reunion in Las Vegas, which also featured a wedding, and many laughs. 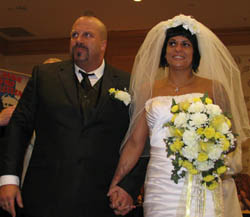 It’s a common part of the annual event to talk about stars who have passed on since the previous gathering. The list seems to get longer every year, but perhaps that is in part because news circulates faster than ever.

Most of the time.

The star of last year’s reunion was undoubtedly Ted Tourtas, an 91-year-old veteran who wrestled Jim Londos in the 1930s, who arrived at the event without any fanfare, but stole hearts by refusing to cede the microphone when he finally got a chance to speak.

Alas, Tourtas died in December, but word of his death only reached the Cauliflower Alley Club organizers days before the reunion, so for many attendees, the first they had heard of it was by reading the list of fallen warriors.

The state of health is a common theme as well, whether it’s a recounting of personal surgeries and challenges over the past year, or news about other friends unable to attend. (In the latter category are the likes of Tito Carreon, who has pneumonia, Tito Montez in Arizona, and Stephen Petitpas out in New Brunswick, who recently had triple bypass surgery.)

Fortunately, there are some wonderful moments that will stayed etched in memory forever — including Dagmar surprising her old friend Roberts, followed by a smile that lit up the room and a hug that was a tight as any boa constrictor.

The wedding of Edmonton-based grapplers Sean “Massive Damage” Dunster and “Sexy Samantha” Tanya Lavigne was another one of those magic moments.

The pair were married by Father Jason Sanderson — The Wolfman in his wrestling days — who last performed a ceremony at the CAC when Adrian Street wed Miss Linda in 2005.

“The groom is a little nervous. If anybody hears me yell, block the door,” joked Sanderson.

Indeed, Dunster did seem a little nervous and sweaty, his voice cracking as he gave his vows. Lavigne was unusually quiet while giving her response, and the gathered friends, family, wrestling legends and fans had to strain to hear her.

But there was no mistaking her rippling muscles when she turned to face the audience and threaten retribution should anyone give any reason why the couple should not be wed.

Later that night, the newlyweds wrestled in a tag team match against Sinn Bodhi (Kizarny) and Stacy Carter at a show away from the Gold Coast Hotel & Casino.

For those not at the indy card, there was an informal gathering to share road stories and renew acquaintances.

“God, it’s great to see my friends,” said B. Brian Blair, after sharing a funny anecdote about a trip with Andre the Giant and Dusty Rhodes where a cooler full of pee came into play.

Bugsy McGraw, at his first CAC event, talked about having retired from nursing after 20 years, but still having worked a match — with Blair as a partner — a little more than a year ago.

And, given the way the next couple of days are shaping up, there will be plenty of more time for friends and to get more of Bugsy.