Have you ever gone out to dinner and expected more out of your prime cut of steak, only to enjoy your baked potato better? That’s what watching The True Story of WrestleMania feels like.

The three-DVD set released prior to WrestleMania 27 quickly becomes more of a “Best of…”, which is not what I hoped for prior to viewing it. The question then becomes, is there enough quality in the side dishes to recommend the compilation?

Despite being titled The True Story of WrestleMania it feels like the viewer never really gets the “true” story. Sure, we are privy to the challenges and successes of what came to be known as the Super Bowl of professional wrestling, but very few failures are included in the telling of the story. 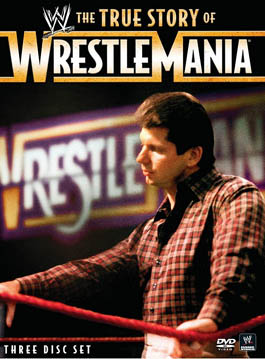 The few incidents of trouble that are highlighted, such as the WrestleMania 2 closed-circuit TV feed cutting out on some viewers and the disappointment in WrestleMania 8’s build and execution, were surely not the only incidents in the entire history of the event where things didn’t go according to plan.

Many tales of struggle from WrestleMania folklore are glossed over in this set. How about discussing the problems Mr. T presented leading up to WrestleMania 1? Or what about Shawn Michaels “losing his smile” and changing the plans for WrestleMania 13? Then there’s also the issues WWE had to deal with for WrestleMania 20 when both Goldberg and Brock Lesnar would likely be leaving the promotion after their match together at the event.

Instead, WWE wanted to spend more time patting themselves on the back for being able to book and attract certain celebrities to WrestleMania with feature segments on Mr. T, Lawrence Taylor — despite his recent legal troubles — Mike Tyson and Floyd Mayweather Jr.

My favourite segment of the DVD, albeit a short and sweet chapter, is the behind-the-scenes footage from WrestleMania 9. I could enjoy an entire DVD dedicated to this video, which includes scenes such as Hulk Hogan greeting Giant Gonzales, Yokozuna walking his kid around the backstage area and the set-up of the elaborate entrance set for the event.

Other gems include Gene Okerlund interviewing William “Refrigerator” Perry prior to the WrestleMania 2 battle royal and Okerlund cracking up after one of Perry’s lines. The simple fact that so much of this special footage from the past exists is amazing foresight on WWE’s part.

The DVD’s problem is that it fails to incorporate even more of these hidden gems and instead opts for visuals that any wrestling fan has seen over and over and stories they already know by heart.

On the subject of the stories, I’m not sure how old the footage is, but it’s nice to have comments from Hulk Hogan included on the set, despite his TNA involvement. The DVD would not be the same without his contributions. Same goes for Gene Okerlund, Howard Finkel, Steve Austin and The Rock.

Noticeably missing from the set, however, are comments from Randy Savage and even the Undertaker, among others. Savage could have been a possible commentator given the Legends contract he recently signed and the fact the Undertaker does not make a single comment on the DVD, despite an entire chapter being devoted to his streak and two decades of WrestleMania experiences under his belt, is absolutely mindboggling.

There are a few other choices the team working on the DVD made that don’t make much sense, particularly with the WrestleMania 19 segment. The focus of the chapter is the match between Shawn Michaels and Chris Jericho, but the match doesn’t even appear as one of the bonus features.

Another great opportunity is missed with this chapter when it fails to discuss Steve Austin’s health issues leading up to the event, issues that landed him in hospital with worries that he had suffered a heart attack. The DVD does feature a segment about Austin knowing it was his last match, but it could have gone deeper about his stressful WrestleMania weekend.

At the same show, Kurt Angle wrestled Brock Lesnar with a broken neck and all the talk going into the show was whether or not Angle would be able to compete and if he did, would it be his last contest as well. This is not even mentioned at all.

Another disappointment is with WrestleMania 8 and WrestleMania 9, when the makers chalk up the change in main events — Hogan vs. Sid Justice instead of Ric Flair and Hogan challenging Yokozuna after he defeated Bret Hart — to politics. That isn’t good enough, when the DVD is purporting to tell the “true” story behind WrestleMania. Give us the details …

Ironically, WrestleMania 15 gets about 15 seconds of air time and events 22 and 26 are largely glossed over without any focus. There are just too many events for one DVD, despite a fair running time of nearly two hours.

The first three WrestleManias get a fair amount of time dedicated to each, then the chapters are cut shorter and shorter from WrestleMania 4 onwards. The pace of events is accelerated further around WrestleMania 12 and 13, slowing briefly to do a larger package on Mike Tyson’s involvement with WrestleMania 14.

There’s also some jumping around between events that takes away from the linear timeline approach. WrestleMania 3 jumps to 23 because both events were in Michigan. Same goes for WrestleMania 6 to 18 because of their Toronto SkyDome connection and WrestleMania 10 to 20 because Madison Square Garden was host to both extravaganzas.

The images are amazing and it’s a wonderful trip down memory lane to see all the events again, in their condensed form. The problem with the set is that it does not live up to its title and to quote a line from The Simpsons, seems a little like “flagrant false advertising” to this writer.

Perhaps a more accurate telling of the history of WrestleMania — although the WWE bias is also prevalent here — would be WrestleMania: The Official Insider’s Story (2001) in which a number of behind-the-scenes nightmares are discussed leading up to the Granddaddy of them all. Another great source is the bonus feature The Mania of WrestleMania on the WrestleMania 20 DVD set that documents the aforementioned WrestleMania 19 issues.

The bonus matches with this set are your usual WrestleMania fare, with classics such as Randy Savage vs. Ricky Steamboat, Hulk Hogan vs. Andre the Giant, Shawn Michaels vs. Razor Ramon and The Rock vs. Hogan.

There are three extra matches on the Blu-ray set and both Blu-ray and DVD editions include some enjoyable extra features, such as Rey Mysterio discussing his WrestleMania costumes and Bret Hart talking about his return to WrestleMania.

In the end, we may never get the “true” story of WrestleMania, but there’s still enough content on this DVD that it’s recommendable, as long as you completely ignore the title and are in the mood for a WrestleMania on-screen recap rather than an off-screen one.

Viewers will enjoy this fully-loaded baked potato, despite their steak not being cooked to perfection.