ATLANTA – If it seems like Shawn Michaels’ induction into the WWE Hall of Fame was a long time coming, maybe it was because he needed to actually retire first. 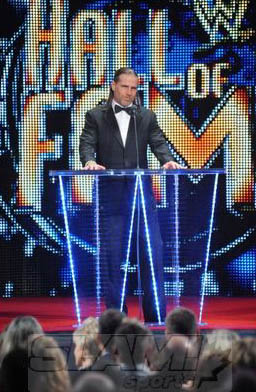 After four years on the shelf with a back injury, Michaels was lured back into the ring in 2002 for what even he admits was supposed to be one final match. It took nine years for him to end his comeback so he could collect the Hall of Fame ring his accomplishments suggest he deserves like few before him.

The Heartbreak Kid got his ring on Sunday night before a very appreciative gathering of peers, family and WWE fans at the Philips Arena. Though he spent 26 years entertaining crowds around the world, Michaels claimed he was nervous to be accepting the honor, yet pleased with the way his career came together in the end.

Michaels credited his relationships with God and his family with aiding the late career redemption of his personal reputation. His status as an elite in-ring performer has never been in question, and HBK mentioned more than once that the motivation for him to reach that level came from his ongoing need for validation from fans and other wrestlers to assure him that he was “good at my job.”

Triple H accepted the job of inducting his close friend, starting out in a humorous fashion that Michaels would later compare to a roast. But The Game turned serious before he finished, even getting a little choked up as he spoke glowingly about his buddy’s legacy.

“You were the greatest performer I’ve ever seen in my life,” Triple H said before bringing Michaels out to the stage. “The greatest I’ve ever stepped in the ring with. The greatest, period.”

The other emotional high point of the evening came when Dusty Rhodes inducted the Road Warriors — arguably the greatest tag team in wrestling history — and their original manager, Paul Ellering. Since Michael “Hawk” Hegstrand passed away in 2003, the honor was a bittersweet one for surviving member Joseph “Animal” Laurinaitis.

Animal spoke at length about the unique connection the two men shared, both in and out of the ring. Ellering produced a Hawk action figure later in the acceptance speech to give their missing friend a physical presence, however small. 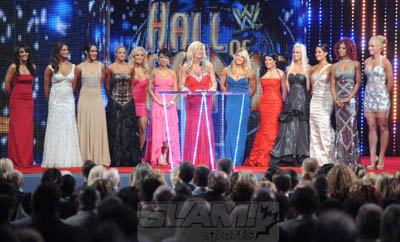 Sunny is backed by the Divas.

The Hall of Fame ceremony had plenty of lighter moments, including LayCool and the rest of the WWE Divas inducting trailblazing female Sunny. Terry Funk also drew some laughs as he praised Abdullah the Butcher for putting butts in the seats without saying a word on the microphone and “forking” him in violent fashion all over the world.

Judging by the number of boos from the crowd, not everyone was amused with comedian and Drew Carey getting selected for the Hall of Fame’s celebrity wing. After an initial joke, Carey admitted he wasn’t sure he deserved it, but he was humbled by getting the call.

The Price is Right host appeared to win over some naysayers by praising the athleticism and dedication of the WWE Superstars. Carey also got an endorsement from Kane, of all people, despite the Big Red Machine’s assertion that the Cleveland native stole his thunder during the same Royal Rumble in which he eliminated a record-setting 11 competitors.

“Beneath that jocular exterior beats a black heart,” Kane said. “Drew Carey is the embodiment of pure evil. I like that. I respect that. He reminds me of me.”

The 2011 Hall of Fame Class was rounded out by Bullet Bob Armstrong, inducted by sons Brian (who did some of his classic Road Dogg shtick), Brad and Scott, and “Hacksaw” Jim Duggan, inducted by Ted DiBiase, Sr.