Mat Matters: Why Triple H might win against The Undertaker — but why he should lose 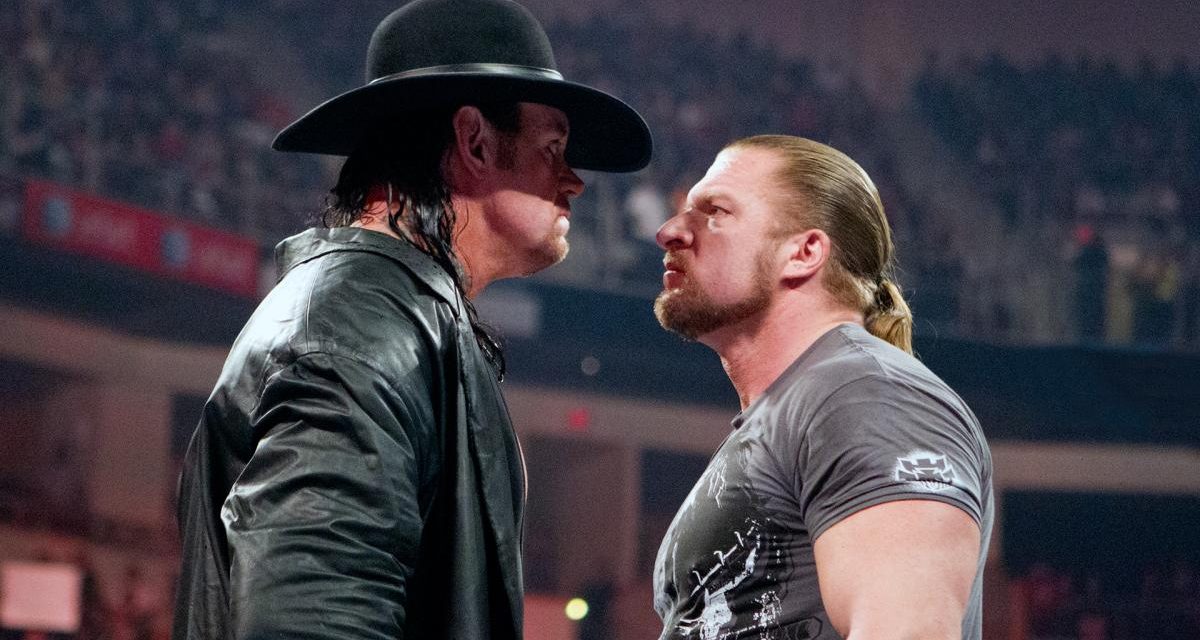 Streaks in sports carry with them unparalleled excitement and drama — and I don’t mean the drunken fan who runs across the field. Any hitting streak in baseball that even approaches thirty games gets a lot of national media attention, and then the player usually falls well short of Joe DiMaggio’s 56-gamer. The New England Patriots may not have had nation-wide support for their incredible, but failed, attempt at a perfect season in 2007, but most sports fans acknowledged that they were witnessing something special.

Unlikely drives such as these get people excited because they just aren’t supposed to happen — wins and losses are supposed to balance each other out over time. In that regard, since it’s WrestleMania season, one match tends to dominate the prognostications and discussions: The Undertaker’s undefeated streak at the WWE’s premiere event.

Of course, The Streak wasn’t really as hot a topic of conversation until the last few years, now that people are able to look back and see full history. Suffice it to say, nobody was really concerned about The Undertaker’s winning ways when he took on King Kong Bundy (WrestleMania XI) or the Big Bossman (WrestleMania XV). The most serious talk about smashing the perfect record really started when The Undertaker put his perfect record on the line at WrestleMania XXIV against Edge, who had his own perfect WrestleMania record broken only the year prior — remember that modest streak?

Since that time, The Streak has become such an enormous element that, in a way, the WWE has painted itself in a corner when it comes to lining The Undertaker up against an opponent. At this stage of his career, it’s safe to say that The Undertaker is playing defence now — basically trying to keep The Streak alive until his retirement. With that in mind, it’s worth taking a look at the two roads that lay ahead for The Streak: sustain it, or smash it. 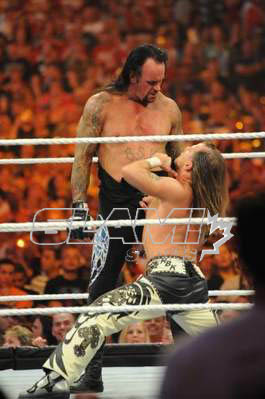 Will Triple H be begging The Undertaker to end it, like Shawn Michaels did last year at WrestleMania? Photo by Mike Mastrandrea

First off, let’s say that The Undertaker walks off into the sunset with his undefeated record at WrestleMania intact. Well, why not? In a world where the athletes really can write out the ending the way they want, why not create a benchmark that is so far and above what anybody else has accomplished? Not only that, but it fits The Undertaker’s character so well. Despite several World Title reigns, he is someone that has never really seemed to be about the championships. His calling card has been domination and immortality, and titles have been picked up along the way often as convenient by-product of demolishing whomever he has been targeting at the time. To that end, an undefeated record at WrestleMania is a perfect legacy for him to leave behind.On the other hand, let’s say that it has been decided that The Undertaker will step down with a nearly perfect dance card. The biggest question of all, therefore is: who?

Who will be the one to make their name at the expense of The Streak?

Option one is for a competitor who is on, or is at least close enough to, a parallel level as The Undertaker that it will be believable that they are the one to break it. Triple H fits that bill. The other option is for someone to make their mark and proclaim their future greatness by toppling the Deadman as they come into their prime. That might describe someone like Sheamus, Wade Barrett, or, to a lesser extent, John Cena.

However — it’s not going to happen that way. In the post-Brock Lesnar world, the WWE is rightfully hesitant to hitch too much of their wagon to a rising star, lest they change companies — or careers altogether. So, that leaves us with option one: someone of equal stature to The Undertaker. That’s why I believe that this year’s challenge to The Streak is the one that matters.

Either Triple H breaks it, or The Undertaker keeps his record intact — because, as both Triple H and The Undertaker have said during their recent promos, they are the last remaining giants.

It’s also entirely possible that Triple H will indeed pull out the seemingly-impossible victory. Shawn Michaels, as much as he was being given the mantle of The Undertaker’s greatest challenge, is known as much for his incredible losing efforts at WrestleMania (against, for example, Steve Austin, Kurt Angle, and Razor Ramon) as he is for winning. Triple H, on the other hand? Well, despite his .500 record at WrestleMania, The Game has always been about winning when the chips are down. 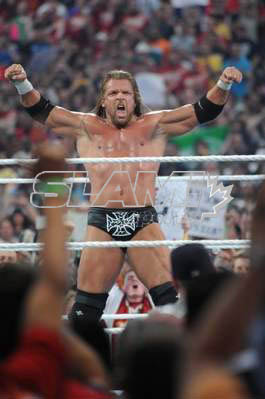 Yes, Triple H has lost at WrestleMania as often as he has won (he spent a few seconds in the ring with Ultimate Warrior at Wrestlemania XII, if you recall); but, when he wins he tends to do so despite the odds, and even despite the popular sentiment.

People tend to forget that Hunter Hearst Helmsley was well on his way to prominence before he married into the McMahon empire, and it’s quite possible that he would have still become The Game regardless of his personal life choices. Yet, he will always be damned if he wins, and damned if he loses. When he wins, he is often blamed for abusing his influence; when he loses, it’s attributed to an attempt to placate the critics of his backstage power, and he carries the reputation of only grudgingly putting wrestlers over cleanly at his own expense.

Although, there was one notable (and pretty clean) loss at Wrestlemania X-Seven against, guess who, The Undertaker. I found it interesting that, when The Streak really began dominating discussion in the past few years, viewers were often treated to montages showing The Undertaker’s victims — but Triple H was not featured in the roll call.

Of course, that wasn’t quite the same Triple H. He was, at that time, a little closer to the type of wrestler I mentioned earlier; he was still establishing his main event presence. To be honest, there wasn’t much chance of Triple H stopping what was, at the time, a mere “Decade of Destruction” for The Undertaker. 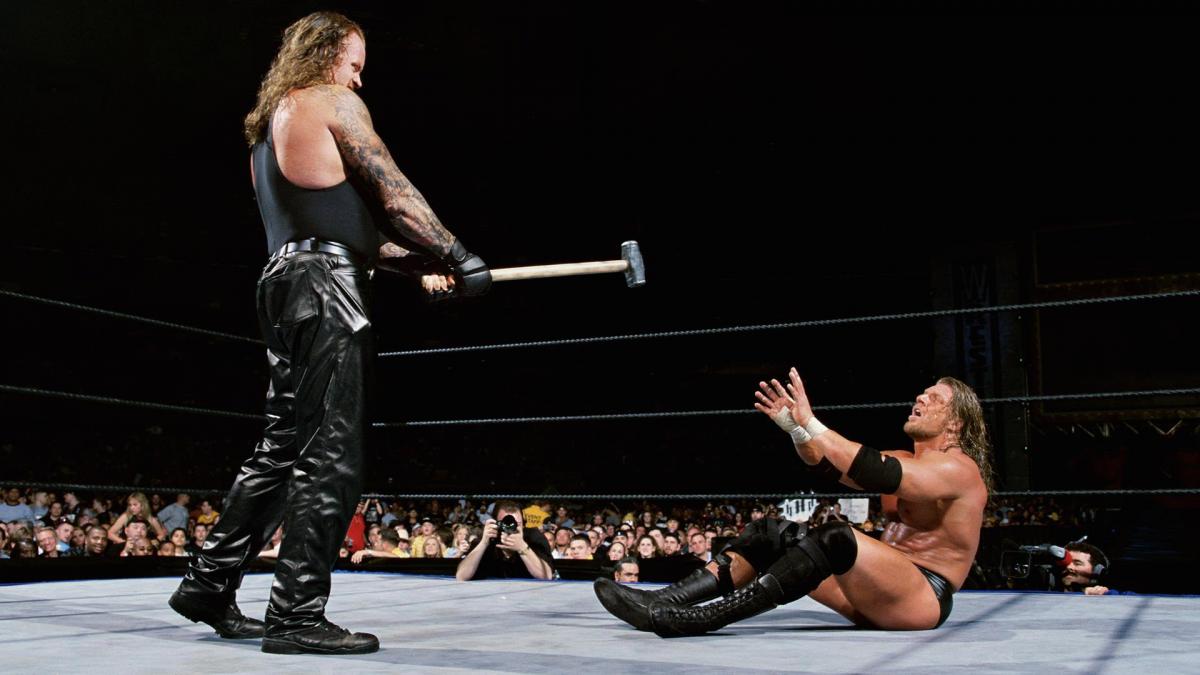 The Undertaker offers Triple H a taste of his own medicine at WrestleMani X-Seven. Photo: WWE

Now, Triple H is fighting a much different beast, and this is nothing less than a battle between two legends in the business who are fighting over their place in WrestleMania lore. That’s not me buying into the WWE hyperbole machine, either. When it comes to deciding upon the winner of this match, this is as important a decision as the creative minds have had to make in a while, and it may stand as the most important for a while from now, too.

Now, the WWE has yet to contact me for my opinion, so here it is unsolicited: if The Streak is broken, now or ever, it will be a short-sighted decision that will be looked back upon as a mistake.

In a way, Shawn Michaels said it best when he said that he would resist coming out of retirement as he had too much respect for The Undertaker to diminish the importance of their matches. Building up such a huge foundation of victories has given a certain credibility to the wrestlers that have failed to break The Streak. Giving someone like Triple H the sole success diminishes the efforts of those that have tried before him. However, who would be shocked to have Triple H booked to accomplish what even Ric Flair could not do?

Ultimately, the appeal of continuing The Streak to an impeccable end lies in what I suggested before — it’s the kind of thing that is so hard to come by in real sports. Given a chance to script a perfect ending for The Undertaker’s career, the WWE should resist delivering a shock by having it broken, and instead think long-term and deliver the awe of an unblemished record.