He made his summer home in Hyannis Port. His springtime mansion was in Palm Beach. Autumns were spent in Bel Air, and he wintered in the Netherlands Antilles. But Toronto has always held a special place in the heart of the Million Dollar Man. 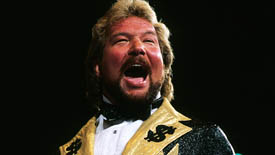 “Toronto is one of my favourite Canadian cities, and it’s where I had my best WrestleMania match,” Ted DiBiase recently told SLAM! Wrestling from his home in Clinton, Missouri. “It was against Jake (“The Snake” Roberts) in the SkyDome, and at that time, I had never wrestled in front of a crowd that large — I think it was 67,000.”

Fans will have an opportunity to meet DiBiase at the 2011 Wizard World Comic Con being held in Toronto at Exhibition Place from March 18 to 20.

“People at these conventions often ask me what my most memorable match at WrestleMania is, and obviously my first WrestleMania which was IV, but my favourite, I tell people, was against Jake at WrestleMania VI,” said DiBiase. “Wrestling Jake was almost effortless, working with him, we could almost go out there without even saying a word. And that promo he cut, oh my gosh — brilliant!”

With the Million Dollar Belt on the line, Jake “The Snake” Roberts warned DiBiase before the match: “These were people far less fortunate than you. People who could use your money for essentials, and what did you do? You made fun of them and you humiliated them. Well, now it’s my turn. I’m going to make you beg, DiBiase. You are going to get down on your hands and knees. This time, you’ll be the one that’s humbled. This time, you’ll be the one that’s humiliated. And this time, you will be the one that grovels for the money. And how appropriate that the money you grovel for is your very own. A victim of your own greed, wallowing in the muck of avarice.” 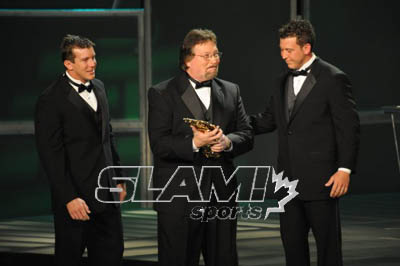 Ted DiBiase Sr. is flanked by sons Ted Jr., left, and Brett at the 2010 WWE Hall of Fame induction in Phoenix, Arizona. Photo by Mike Mastrandrea.

Mean Gene Okerlund, clutching the microphone, exaggerated only slightly when he quipped: “Longfellow couldn’t have said it better!”

The Million Dollar Man would defeat The Snake that night in Toronto, with the help of DiBiase’s bodyguard Virgil, who will also be appearing at the 2011 Toronto Comic Con, and Wizard World conventions in Anaheim, Chicago, and Philadelphia.

Though DiBiase’s illustrious career would eventually take him all over the world, he had never been to Canada until he joined the WWE. “When I was in the territories, aside from going to Japan, I had never even been in another country,” said DiBiase, who wrestled for years in Texas, Atlanta, and the Mid-South. “So the first time I ever came to Canada, I came to Toronto. I have so many fond memories of wrestling at Maple Leaf Gardens, and I remember that big ramp that led to the ring.”

His first match at Maple Leaf Gardens came in the summer of 1987, when DiBiase scored a pinfall victory over the Junkyard Dog, after using a foreign object. “Junkyard Dog, as a matter of fact, was one of my very good friends down here in Mid-South,” said DiBiase. “He was actually the best man at my wedding when Melanie, my wife today, and I got married. I met Melanie in Atlanta in ’81.

“So this WrestleMania, coming up in Atlanta, it will be 30 years to the month that I met my wife,” DiBiase added proudly. “Of course, I’m going to be there to induct Jim Duggan (into the WWE Hall of Fame) and the whole deal, but it’s also going to be a very special weekend for Melanie and I because we’re going to go back and reminisce.” 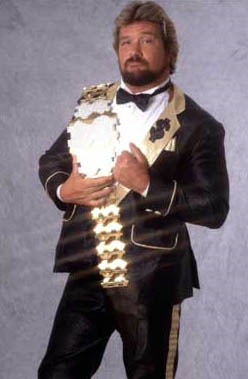 Just weeks after WrestleMania in Atlanta, DiBiase will be heading back to Canada for a speaking engagement with the Promise Keepers in Lower Sackville, Nova Scotia on April 15. Promise Keepers Canada is a uniquely Canadian ministry for men, explained DiBiase, who travels the world as an evangelist with his own Heart of David Ministries. “The first thing I did when I left the WWE in ’06 was get hooked up with (Promise Keepers Canada), and my very first speaking engagement for them was in Regina, Saskatchewan,” said DiBiase.

“And as a result of that meeting, and the impact God had through my message, I’ve been doing these Promise Keepers meetings all over Canada for the past four years.” He added with a chuckle, “I like to joke and tell people that I’ve probably seen more of Canada than most Canadians. But I’ve been north and south and east and west all over that country.”

Throughout the late ’80s and early ’90s, DiBiase would wrestle in every major city in Canada. Many of those battles — against the likes of Dusty Rhodes, Big Bossman, and Tito Santana — took place at Maple Leaf Gardens along with auditoriums in Kitchener, London, Ottawa, and Hamilton. “Oh my gosh, before I came to Toronto for the first time, I had no idea of the heritage around that area,” said DiBiase of Southern Ontario. “I’ve had the privilege of wrestling in Hamilton, just down the road from Toronto. And in terms of Canadian pro wrestling, Hamilton was one of those places like Calgary — with Stu Hart — that had so much history. Iron Mike Sharpe is a guy I wrestled a lot in Mid-South, and he came out of there.

“And Dewey Robertson, he was one of those guys who, early in my career, I met. He was from around there. I actually met Dewey in Kansas City, but he was one of those guys who had been in the business for a while already. And there are different guys you remember, when you were young and just coming up, who went out of their way to befriend you, take care of you, and help you learn the ropes. Dewey, for me, was one of those guys. Of course, he was a lot tamer back then before he became The Missing Link — and a lot other things,” said DiBiase of the late Robertson’s wild persona, both in and out of the ring. 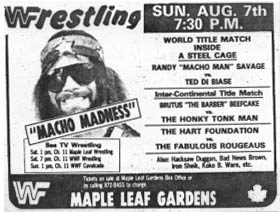 Wizard World founder and producer of the North American Comic Con tour, Gareb Shamus, vividly remembers The Missing Link, along with Jake “The Snake” Roberts and Ted DiBiase. “I absolutely love wrestling, and watched it every week on television growing up,” Shamus told SLAM! Wrestling from New York City. “For years I would go to see every single event that came to Madison Square Garden, and I was very lucky to live so close to the city.

“Wrestling was this amazing part of my life, and I saw wrestlers like Ted DiBiase as superheroes, or super villians, and larger than life. That’s why I thought bringing wrestlers in for the comic cons made perfect sense,” said Shamus, who also has wrestlers like Eugene, Rhino, and Torrie Wilson appearing at various Wizard World Comic Cons this summer.

“The wrestling stars always have great stories, and the fans who come out always bring action figures, magazines, and championship belts to get signed, and they absolutely love it. And bringing Ted DiBiase in for the Toronto event is a major bonus because he is instantly recognizable, a WWE Hall of Famer, and one of the most unique and memorable wrestling villains of all time.”

DiBiase concurs, the Million Dollar Man was a character the fans loved to hate. “I get a lot of people coming up to me at these meet-and-greets that say, ‘You know, you were one of the best bad guys ever. I hated you when I was a kid,'” DiBiase recalled with a chuckle. “Or they say, ‘Don’t get mad, but man, I used to hate your guts!’ I just say, ‘Thank you. You weren’t supposed to like me.’

“The best heels in my opinion — and I try to pass this along to my son Ted, and his younger brother (Brett) who is in (WWE) developmental — are the heels that are cowards. And that’s what I was. I was a big arrogant rich guy, but I was also a blowhard. I talked a big game and everything, and I showed the people that I could wrestle, but man, if I could avoid conflict and take easy street, I would. When somebody actually stepped up to the plate, I’d back off and send my bodyguard to do the dirty work. That’s the classic heel.

“And people never get tired of seeing a guy like that get beat up. And man, walking through that curtain and hearing the fans boo me out of the building was music to my ears.”

It’s those passionate fans, DiBiase said, he looks forward to seeing at conventions like the upcoming 2011 Toronto Comic Con this weekend. “I really enjoy greeting the fans, chatting with them and taking pictures. And in Toronto, I’ll have my old sidekick Virgil there along with me.”

With WrestleMania 27 just around the corner, DiBiase opined on his many appearances over the years on “the grandest stage of them all.”

“I kinda joke with some of these guys who like to talk about how they’ve been in this WrestleMania, and that WrestleMania. And I respond by sayin’, ‘Well, you’ve wrestled in so many WrestleManias, but very few guys can say they had three matches in one WrestleMania,'” DiBiase said with a laugh. “At WrestleMania IV I wrestled Jim Duggan, Don Muraco, and Randy Savage. Now beat that!

“But like I always tell people when they ask, my best WrestleMania match was against Jake Roberts,” DiBiase concluded. “Jake is one of those guys who I really loved to work with, and wrestling him in front of 67,000 in Toronto was an enormous thrill. It’s the one I enjoyed the most.”