Even the most ardent apologists (which this reviewer has occasionally been called) would be hard-pressed to defend TNA’s 2011 edition of Victory Road. After a night full of screwjob finishes, TNA ended the night off on two really low notes, in the form of a number one contender’s match that had no winner, followed by a main event world championship match that ended in a minute. As evidenced by the fans’ cries of “Bulls***!” that ended the show, the big losers of the night were anyone who paid to see the show. 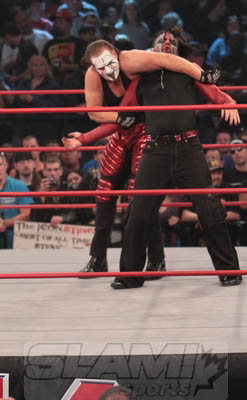 Did you miss it? One move and done for Sting against Jeff Hardy last night. Photos by George Tahinos.

While there was much about the show that the crowd could have taken umbrage with, that chant was directed specifically for the main event, that saw Sting defend his World Heavyweight Championship against Jeff Hardy. After Jeremy Borash finished his introductions, Eric Bischoff came to the ring with a microphone in hand. Bischoff said that since Jeff Hardy had lost his belt because the network made him wrestle without advance knowledge of his opponent, tonight, he had a surprise in store for Sting. This match would now be contested under No Disqualification rules, something that he and Hulk Hogan had apparently told Jeff Hardy earlier in the day. Sting killed the messenger, flattening Bischoff with a punch, and then within seconds of the match starting, he hit Jeff Hardy with the Scorpion Death Drop — the first and only move of the match! — and got the quick pin to retain his belt. To recap, the main event took just about the same amount of time as it does to say “I want a refund.” Simply terrible.

What made it worse, is that it followed a match with an equally bad finish, the aforementioned Number One Contender’s match between Mr. Anderson and Rob Van Dam. Anderson dictated the pace early, so as to not fall into the trap of wrestling Van Dam’s style of match, but after a while, RVD was able to recover and hit a series of his signature moves like Rolling Thunder. With momentum building, RVD laid Anderson across the guardrail, and was going for a spinning legdrop off the ring apron, but Anderson moved and RVD’s leg hit hard. From there, Anderson methodically worked over RVD’s leg, slamming it repeatedly against the corner post, and then savagely pounding on it back in the ring. The battle eventually spilled to the floor, and the two fought all the way up the ramp. Exhausted, Anderson hit Van Dam with a Mic Check on the entrance ramp, knocking Van Dam silly, but landing hard on his back and taking a lot out of himself as well. Anderson tried to scramble back to the ring, but wasn’t able to get there before the referee had counted both men out, to the chagrin of the fans. Despite the crowd chants to restart the match, this one was over, and commentators Mike Tenay and Taz said to tune into Impact on Thursday to find out what will happen to fill the number one contender spot.

TNA’s next pay-per-view will be Lockdown on April 17.

Before the match, Bully Ray told Dreamer that Hogan and Bischoff had agreed to change this match to a no-DQ, Falls Count Anywhere match. This could have been an intense opener, but instead it was diluted by bad comedy, particularly when Dreamer used a giant foam Minion (from the movie Despicable Me) as a weapon, and later on an inflatable sex doll. After a few big power moves by both men, Ray was going to put Dreamer through a table, but got distracted by the sight of D-Von’s sons heading to the ring. As Ray turned to confront them, D-Von ran in from behind, and he and Dreamer delivered a 3-D to Ray, putting him through a table and down for the three count. So, it took four babyfaces to beat the heel in sneaky fashion. The crowd didn’t seem to mind the illogical booking, though, as they cheered pretty big for the 3-D and for the celebration of Dreamer, D-Von and his sons.

Backstage, Christy Hemme interviewed the Beautiful People and Winter. Winter said that all she wanted was to be friends with Velvet Sky, but that Velvet didn’t share that view. Angelina seemed to back Winter, possibly teasing dissension in the ranks.

Before the match, Sarita commented on the internal strife within the Beautiful People, and said their lack of focus will cost them the belts.

Early on, it looked like Sarita and Rosita had the lack of chemistry, as Love and Winter would continually avoid various double-team moves. Frustrated, Sarita went outside to get the belt, and was poised to knock out Winter from behind, but Velvet ran to the ring and made the save. In the confusion, Sarita rolled over Winter who had Rosita in a small package, and Rosita got the pin. Angelina and Winter were visibly upset with this, and blamed Velvet for the loss, ignoring her attempts to explain that she was trying to help.

Jeff and Karen Angle were honeymooning with their (his and her) kids at a theme park. Karen seemed to be not having as much fun as Jeff and the kids, who were excited to go on all the rides.

Backstage, Matt Morgan vowed revenge on Hernandez, who he called Shawn, for costing Morgan the belt some time ago.

This one started off hot, with Morgan tearing into Hernandez viciously. Hernandez was able to fight back, though, and got Morgan down, breaking a wooden stick on his back, and then trying to use the jagged edge to carve up Morgan’s forehead. The two exchanged power moves and the advantage went back and forth throughout this match. Hernandez tried to scale the ropes, but got caught and slammed hard to the mat. Then, a “fan” ran into the ring, only to get beaten down by Morgan and some referees. This let Hernandez go outside and get a chain, but Morgan was able to steal it and use it on Hernandez who rolled into the corner. With Morgan trying to wake up the referee, who was down from the fan confrontation, Hernandez retrieved a bottle of red liquid and squirted it all over Morgan’s chest. A second ref came to the ring, saw the blood-like substance, and declared Hernandez the victor.

Backstage, Max Buck told Christy Hemme that, for his birthday, Jeremy had promised Max the X-Division Championship. Meanwhile, Kazarian told Jeremy Borash that he, like Charlie Sheen, would be “winning.” Finally, in a vignette from earlier today, Robbie E told Cookie that he had a plan to get the belt back.

This was a good match, and full of some good action. Some good, creative moves here, including Kazarian springboarding off the top rope, leaping over the heads of Generation Me, and grabbing the overhead cable to make an attempt to get the belt. Later, Kaz dropped from the cable and hit Robbie E with an elevated legdrop. Scary moment at one point, when Robbie E was backdropped over the top, and hit the ring steps on his way down. There was a cool move that saw Kazarian grab the legs of Max, swing him, and, as Max fell, catch his head and pull him into a Stunner. After a big Tower of Doom suplex spot, Kazarian followed that up with a Flux Capacitor on Jeremy — nice. With Robbie E and Kaz down, Matt got angry with Jeremy who was making a play for the belt, leading to a race between the brothers in the crux of the cables that ultimately saw them both fall. In the meantime, Kaz climbed to the top of the cables, and used the truss as support to walk the cables like a tightrope. Meanwhile, Robbie E climbed a ladder to get to the belt, leading to a tug of war — Kaz from the top, Robbie E from below — which Kazarian won after a boot to the head. He jumped down, and upon hitting the mat, was declared the victor.

The Jarretts were shown honeymooning again. Karen was still angry, but Jeff and the kids were loving life, feasting on a pizza lunch.

Backstage, Beer Money told Christy Hemme that they were going to teach Shannon Moore a lesson in respect.

This one started off with some mutual respect shown between the two teams, with neither side holding a clear advantage. Eventually, Ink Inc. were able to isolate James Storm and hit him with some double-team maneuvers, subtly using some cheating tactics, but not so much as to alienate the crowd, who were evenly split between both teams. Eventually, Beer Money used their size, strength and experience to ground their smaller opponents, and put down Shannon Moore — who, by this time had tried to use the chain on his Book of Dillygaf as a weapon — for the pin. After the match, Beer Money went to shake the hands of the challengers, and Jesse Neal was fine with this, but Shannon Moore would have none of it, spitting beer on Beer Money. He yelled at Jesse on the way to the back, saying that Jesse would never be a champion and that he was no longer a student of Moore.

Backstage, “Cold Blood” Matt Hardy and Ric Flair warned AJ Styles that the business would ultimately take everything from him. Or something like that — I lost concentration, focusing more on Matt Hardy’s eyes, since it seemed like he was doing the interview with them shut for some reason.

AJ had the early edge, but lost it when Hardy pulled Styles face-first into the edge of the ring apron, and then shoved him into the corner post on the outside. There was a great sequence here, where AJ was thrown to the barricade, but he was able to slide underneath it, then jump on top of it and springboard leap onto a surprised Hardy. Tremendous. Back in the ring, Hardy heaved AJ hard into the corner, and then threw him outside where Ric Flair picked him apart. In the ring, Hardy clamped on a neat submission hold, a front double-underhook lock, that punished AJ’s head and neck. Meanwhile, Flair got involved some more, at one point, grabbing and squeezing AJ’s crotchel area while Hardy distracted the ref. Ultimately, AJ was able to fend off Flair’s interference, and hit Matt with the Spiral Tap to get the win. After the match, he returned the crotchel grab on Flair. Very good match — the two worked well together, and seemed really motivated to steal the show.

Karen walked out on her honeymoon, complaining that it had turned into a family vacation. Jeff misinterpreted her anger as meaning that she missed Kurt, and then he said that he did too, so he agreed to bury the hatchet with Kurt on this coming Impact. Afterward, the family got splashed by a park waterfall, which angered Karen more, and further delighted Jeff and the kids.

Backstage, Mr. Anderson said that Rob Van Dam was just a stop on the way to Anderson winning back his World Championship.

Match rating: 4/10 (match itself wasn’t horrible, but points lost due to the ending)

Overall show rating: 5/10 (for Hardy-Styles and the Ultimate X match only).