The 2011 version of Smackdown vs. Raw is out, and we thought it appropriate to set two old-school gamers — and SLAM! Wrestling veterans — to it. Enjoy the contrasting opinions of Jon Waldman and John Powell. 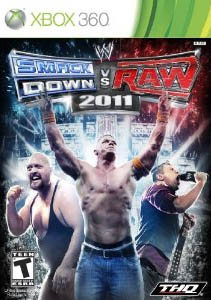 For the last few years, I’ve had the opportunity to try the Smackdown vs. Raw series of games on an annual basis, and throughout that time I’ve been able to play wrestling’s most popular franchise on a variety of platforms.

It started with No Mercy on Nintendo 64, graduated to the Playstation 2 for a few titles and, most recently, Nintendo Wii for the 2009 and 2010 editions.

While I enjoyed the last couple editions of Smackdown vs. Raw, or SVR as the kids call it, 360’s robust capabilities make the Wii versions pale by comparison. The graphics are sharper, the variety of matches is larger and the controls are much easier.

So having said that, you can pretty much guess that SVR 11 is my favourite fifth gen console wrestling game. But it’s not just because it’s my maiden voyage on the good ship 360; rather, THQ did a great job amping up the game this year.

Moving onto video games from SLAM! Wrestling years ago was a natural fit as I have been a gamer since the first Pong machine was plugged in at an arcade. During those years, my passion for pro wrestling and video games tag teamed many times from the Commodore 64 to the Nintendo Gameboy to the Xbox 360. From big to small, beat ’em ups to strategy games and RPGs, I have experienced a wide variety of wrestling games. Some great. Some good. Some absolute abominations. 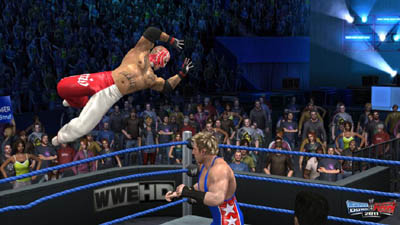 To start, the new physics system is absolutely incredible. Being able to put an opponent into a ladder and seeing the damage or break a chair into pieces after a few whacks is awesome and gives it that extra sense of realism.

But what takes the cake for me is the simplicity of the interaction on the ropes. For years, a wrestler could pull off a suplex, crashing their foe, in theory, into the ropes; instead, the animation would shift over as if the ropes were just a glitch. Now, however, if you hit a move near the ropes, the manoeuvre reacts realistically as the wrestler folds into the bending ring restraints.

Beyond the on-screen system, I really am digging the 360 control system. Aside from the fact that THQ has always been pick-up-and-play friendly, they offer a tutorial at the start of the game that gives you the full rundown of changes. Well done!

Another cool adaptation has been the WWE Universe integration into the regular run of the game. Every basic match now is recorded as part of a season of WWE TV, which means you can either create your own perpetual stories and build them into the mode or play the pre-selected message. The intuitiveness of THQ’s build will even put extra storyline touches in like run-ins or guest broadcast commentators. 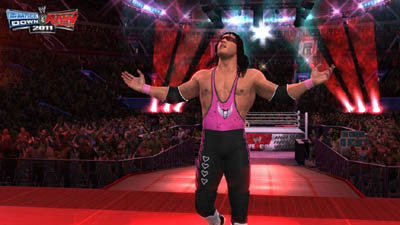 The Hitman can still go!

While none of us may ever know what exactly was in the Iron Sheik’s boot all those years or the exact chemical make-up of The Great Kabuki’s green mist or why the WWE all of a sudden wants to be a “family friendly” company once again, what Smackdown vs. Raw fans do understand is the tried and true control system. Well, we thought we did.

Just like Roddy Piper changing the questions when we thought we had all the answers, the game’s developer, Yuke’s, has decided to mainstream the control system and by doing so has killed off many of the superstars’ trademarked moves. Now after all these years, all that it takes is a uneducated flick of a joystick to perform a manoeuvre.

The trade-off for that simplicity and opening up the game to your Uncle Horace and your grade school sister Jenny, is that we lose a whole ton of moves. How many moves are we talking about exactly? Try about 300.

Smackdown vs. Raw 2011 is about two steps away now from being nothing more than a high-rent version of Mortal Kombat. Okay. Okay. In point of fact, that isn’t true. Mortal Kombat has more moves.

If that gameplay change wasn’t enough, Yuke’s has resurrected the abominable backstage roaming and built the “Road To WrestleMania” mode around that. You will now spend more time blundering around backstage, engaging in futile conversations instead of enjoying a cut-scene and wrestling your next match. What is unintentionally funny about that whole thing is that in order to build up your abilities, you have to talk to the “medical trainer.” All that’s missing from this punch line folks is the needle in your arm. 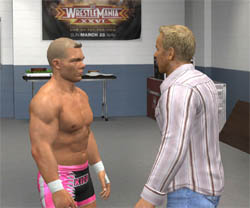 Take Christian to the top!

All is not bad about Road to WrestleMania though. Yuke’s shows some flashes of brilliance that they are known for during The Undertaker and Christian storylines. Trying to end Taker’s WrestleMania winning streak by having to fight through some of his most nefarious foes and reuniting with Edge and Christian are two of the game’s shining and inspired moments.

“Career Mode” has been replaced by something called “WWE Universe” which monitors your gameplay then formulates rivalries, storylines accordingly. It really doesn’t do a half bad job either.

The terminal defect of Smackdown vs. Raw is the result of another developmental shortcut that Yuke’s took. To make the “boss matches” in the popular Road to WrestleMania mode challenging, Yuke’s gave the top echelon grapplers like The Undertaker, Triple H and Randy Orton the uncanny ability to reverse almost every hold you put on them. It is like they all became Dean Malenko overnight or something. It is one thing to test your abilities. It is quite another to just frustrate the living hell out of people. Not fair, Yuke’s. Not fair at all.

As we’ve seen in the past, the moveset built into the game has been amped up. There are a variety of new moves that are part of the game and old ones have been re-designed with a much slicker look. THQ has also continued to include finishing moves from ex-WWEers and current TNA’ers, along with some puro and Lucha-inspired match-enders.

If there is any problem with move selection it is that names we are long familiar with from WWE broadcasts have been changed, primarily those belonging to departed superstars. I really don’t understand why these names have been changed. This has long been an annoyance to me, since it makes move selection a longer process. Did programmers really need to change the name of the Spin-A-Roonie?

One aspect that has been improved upon is the Create-a-Finisher. For comparison sake, I have done a Forward Fisherman’s Buster in SVR10 and SVR11, and the transition between move elements is much smoother this year.

As always, the wrestler creation section has been improved upon from the previous year, while other creation elements like storylines and entrances are pretty slick.

Improvements like “Create A Finisher” and “Create A Match” are very welcome but because of the new control system, you don’t have as many moves to choose from for your creations. This makes designing your own CAWs so much easier but your overall creation is very limited compared to your past builds. It doesn’t seem like Smackdown vs. Raw 2011 is compatible with older versions in the series so you cannot upload your past CAWs either, which is a total chairshot to the head, if you ask me. Nobody wants to keep recreating their stable of superstars or downloading them again every single year. 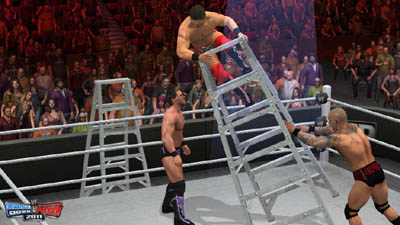 I’ve always been impressed by the look of SVR, and can admit to doing a couple double-takes. Of course, as mentioned earlier, 360 is stunning compared to Wii, but to me realistic elements like seeing the sweat on a wrestler’s body haven’t been a big deal to me. Still, it seems like you can see a wrestler’s body get redder as they incur their beatdown which is cool.

It’s far more important for me, however, to not see wrestlers disappear into the mat or blatantly see their bodyparts separate from the torso, which plagued earlier incarnations. In this regard, SVR 11 meets my expectations.

For sound, this is always tough. It’s good to see that the commentary has changed, by and large, from the soundbites that were previously part of the game. For the Gen 4 years (i.e. the Playstatyion 2/Xbox/Gamecube), we’d hear the same bits game after game, which made me want to eliminate any commentary.

But this isn’t 100% the case. Some of the soundbites are very clearly re-used, to the point where you can hear the difference in volume and tone between fresh and recycled commentary. I’m also not a fan of hearing Michael Cole talk to Jerry Lawler about the upcoming main event in the middle of my match. Oy.

For me, the bottom line is that if a game like NHL 2011 can have a plethora of commentary options, so could the WWE series. The sound effects, crowd chants and music options (which are about halfway to where they should be) are integral parts of the game, but don’t hold nearly as much importance as the broadcast team. 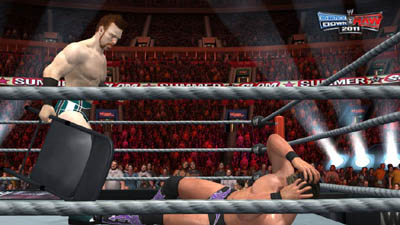 Sheamus is pasty white in pixels too!

I have felt like I have been hit by a Stone Cold Stunner. Yuke’s attention to detail has been one of the hallmarks of the Smackdown vs. Raw series over the years. Their character model work has been some of the best in the business when it comes to duplicating the WWE superstars from the hair on their heads to the tats on their bodies to their facial features. SVR11 is the first time in the series that both the graphics and audio have regressed. New models like the “Celtic Warrior” Sheamus look very, very bland and there is so much erroneous commentary, it really becomes quite irritating. It doesn’t seem like the developers even recorded any new commentary either. Like so much else with this game, Yuke’s shortcuts here are unbelievably unsatisfactory. 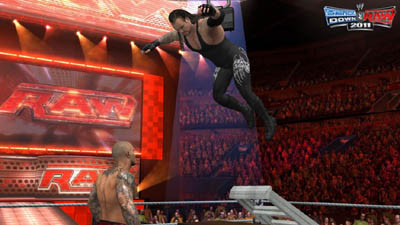 The Undertaker versus Randy Orton — coming at WrestleMania?

Each year I compare SVR to its predecessors, analyzing whether it will inspire me to shelve previous versions. This time around, my mind isn’t conflicted whatsoever.

SVR11 has a couple flaws, but this edition far out-distanced SVR10 in my opinion. Yes, I’m coming from a different perspective, but everything that was faulty on Wii is infinitely better on 360 and the aspects that were universal to all platforms have been heavily improved upon this year.

Sorry Nintendo, but when it comes to wrestling, I’m an Xbox convert. Now, it’s just a matter of waiting to see what THQ will do next year, when Kinect will be fully integrated as a control system; but don’t wait until then to join me in moving to Microsoft — pick up SVR11 for Xbox 360, no questions asked!

If something ain’t broke, you don’t fix it. Yuke’s has tinkered so much with the Smackdown vs. Raw formula, fans have to wonder about the future of the series. Smackdown vs. Raw 2010 remains as the greatest wrestling simulator ever made. So much has changed in a year though. Like ‘The Underfaker’ or ‘New World Order’ Sting, Smackdown vs. Raw 2011 is nothing but a pale imitation that, if not for WWE Universe mode, would not be worth any wrestling fan’s time and attention if they already have SVR10 sitting on the shelf.

Two final notes. In order to have blood in the matches, you have to change the pre-set options. It comes turned off out of the box. Also, each new copy of the game contains an Online Pass allowing one user to play the game online for free. Subsequent players who rent or purchase that copy of the game used will obtain a trial of Online Pass and will have to buy their own Online Pass when the trial period runs out. Sucks that.