Homicide: ‘Politics just got me in the butt’

Homicide is pretty pleased to be back on the indy scene and with Ring of Honor; in fact, regaining the ROH World title is top of his list of things to do. But that doesn’t mean he doesn’t look back on his time in TNA fondly.

“I miss the boys, I miss the staff, I miss everything,” Homicide told SLAM! Wrestling before the Ring of Honor show in Mississauga, Ontario last weekend. “I became a smarter businessman when I went to TNA.” 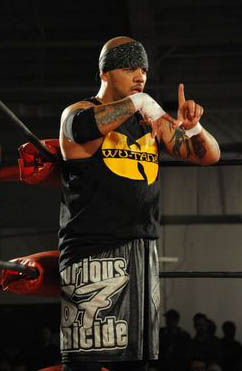 Homicide at the Ring of Honor show in Mississauga, Ontario in November 2010. Photo by Mike Mastrandrea

Homicide (Nelson Rodriguez Erazo) debuted in TNA at the end of 2005, and was primarily in a tag team with Hernandez, The Latin American Xchange, with Konnan as their manager. He lasted until August of this year, where he parted ways with the company while on the shelf rehabbing a groin injury. “It was a dream for me to go to national TV when I went to TNA. I had fun. I had a great tag team partner. I had a great, you could say character, gimmick.”

He is matter-of-fact about his departure.

“I’m not going to lie to you, I was telling my girlfriend honesty, it hurts everybody. When I speak the truth, it hurts. I didn’t say anything aggressive. I was frustrated in the end,” he explained. “I’m very confident that I can do better. Politics just got me in the butt and just caught me. I was miserable at the end of my days in TNA, I didn’t like it.”

Don’t blame Eric Bischoff and Hulk Hogan for his decision to leave, however, though he will admit that things were different when they arrived at the beginning of the year.

He is actually rooting for TNA. “Sometimes I get a little drunk, with the drink, saying, ‘Forget about TNA, that’s a crappy promotion.’ But I hope TNA grows bigger and hopefully all the guys, because all the guys, they need work. It’s a job. Hopefully TNA does well.”

“I love Ring of Honor because it’s pure wrestling. I always politic all my students and the young guys coming in the business, everybody says that Vince McMahon is destroying the wrestling business. He’s not, he’s just got his own style called sports entertainment.”

“In Ring of Honor, I was one of the original guys that built this company, with Samoa Joe, BJ Whitmer, Low-Ki, ‘American Dragon’ Bryan Danielson. I’m happy with the independent wrestling. To me, independent wrestling means freedom. I’m not saying that when you come back to the indies you can do whatever you want to do, because when you come from TV wrestling, WWE or TNA, you have to follow the business point and also the politics. With independents, it’s more like relaxed. You had a hard day at work, you come home, you just want to eat and go to sleep. That’s how the indies are. It’s just more relaxed.”

Traveling to see Hernandez in Mexico is a possibility.

“He’s doing well there, very well. Hopefully, he gets the world title with Dr. Wagner Jr., who is one of my heroes in Mexico. He’s in Mexico right now, he’s still in TNA, but he’s doing more coverage in Mexico. There’s a big rumor that me, Hernandez and Konnan are going to do the 5150 tour in Mexico, and hopefully we’re going to bring it to the States and we’re going to have a LAX reunion.”

Roderick Strong and the ROH World title are firmly in his sights.

“It’s like one of my goals. I remember back in 2006, I captured the World title. It was a blessing in disguise because I did it in New York City, in front of my family and my friends. Doing it again, going back to my roots and capturing the belt, I’ll be happy, very happy. That’s my goal right now.”

He’s in the right place for more growth. “Ring of Honor is the third biggest promotion in North America. It’s big, but it could be bigger. Hopefully it gets bigger in the future.”