If ever there was evidence that WWE is a toned-down, PG-rated company, it’s Rumble Road: Untold Stories from Outside the Ring. Wrestlers, by and large, tell great stories, which are often baudy and hilarious. But those are usually off the record, and sure haven’t found their way into WWE’s second collection of road trip stories. 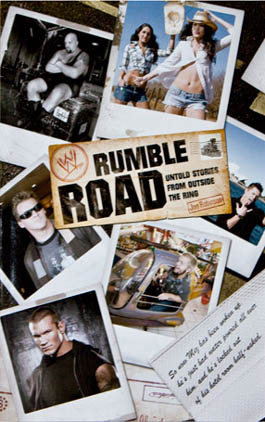 For every great story — and there are a number — you have to wade through two lame ones and a couple of decent ones.

We read about the ribs wrestlers play on each other to pass the time, stories of road trips gone wrong, the love of video games, and food horror stories (and Big Show’s farts). The “Swerves” section is full of better, longer stories that take you to an unexpected conclusion.

Collected by Jon Robinson, who writes “The Gamer” column for ESPN The Magazine and ESPN.com, Rumble Road is a 188-page sequel to 2005’s Are We There Yet?, Tales From the Never-Ending Travels of WWE Superstars.

The two books share a number of traits that only a true, hardcore fan will appreciate, be annoyed by, or be interested in.First off, it’s always fascinating to see who gets into the book that is no longer employed by the company. In this case, Maria Kanellis, Mickie James, Tommy Dreamer and Shelton Benjamin top the list, with an entry by D’Lo Brown offering up a real, huh?

As well, there are behind-the-scenes, laugh out loud segments on Elijah Burke (“The Pope” D’Angelo Dinero in TNA) and Taka Michinoku (from D’Lo).

There are layers to some of the stories that would not be evident to the non-fan, such as Tyson Kidd of the Hart Dynasty being on the road with Natalya — his real-life girlfriend of many years; you can put yourself in his shoes as he is scolded for running out of gas — and we don’t learn about the repercussions later that night.

Or Mickie James stranded on the side of the road calling John Cena for help. Fans have often heard of there being something deeper between the former champions, so maybe …

But we sure don’t hear from Cena. Not to knock the names in Rumble Road, but it’s decidedly B-list. There’s no Cena, Undertaker, or Triple H. What, Mr. McMahon’s limo never breaks down?

A few of the top names such as Kane and Randy Orton do contribute, but there’s a whole lot of Kofi Kingston, Hornswoggle and The Miz.One of the neat features is that Robinson often gets both sides to a story, such as a running gag between Benjamin and Rey Mysterio, where they would fight in front of convenience store clerks, often leading to the unmasked Mysterio getting “kidnapped” by Benjamin’s vehicle.

There are a lot of great visuals that the wrestlers conjure up too.

We have Big Show loving his own personal bus.

The idea of the Bella Twins a little tipsy and Brie is swimming in the middle of the night in a white dress may be real hard to erase.

But can you imagine the Hart Dynasty, the Great Khali and Eve Torres in a car? Me neither, though apparently it happened.

Maybe in the end, my lack of complete satisfaction with Rumble Road — it’s probably a 6 out of 10 — can be summed up by 25-year veteran Chris Jericho, who was allowed free reign to tell some great, non-PG stories in his first autobiography. (The WWE-vetted second may be a different story.)

“Now life on the road is a cakewalk compared to what it used to be like,” Jericho explains, addressing life with cell phones, GPS services and the like.

Ditto for the stories. Most oldtimers really lived wild lives on the road. Today’s stars may not have it easy — travel is still travel — but it ain’t the same.